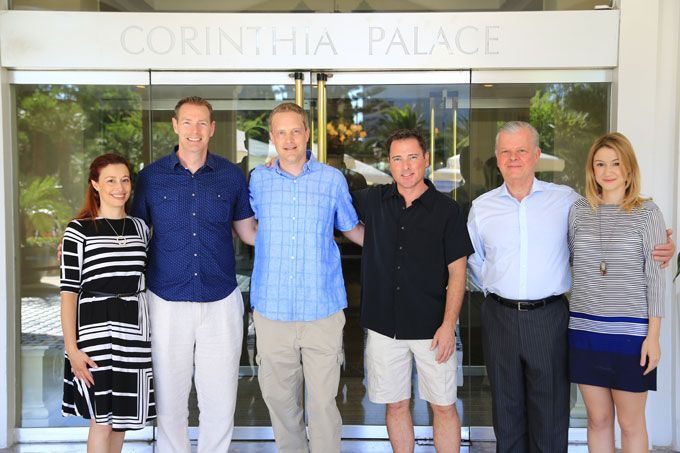 The 5-star Corinthia Palace Hotel & Spa hosted three bestselling American authors: Chris Kuzneski, Graham Brown and Boyd Morrison - all three authors are writers in the thriller-action genre, as part of the Malta Tourism Authority (MTA) initiative to promote the Maltese Islands to the discerning American market. MTA hopes that their stay in Malta will spark their imagination for future books.

Chris Kuzneski was selected by the MTA, since a large proportion of his thrillers refer to or are set in Malta. The MTA invited the Florida-based writer to experience the Maltese Islands firsthand with the hope that Kuzneski will base his next book on Malta.

Brown and Morrison were invited at a later stage to join Kuzneski, with the main objective of having the authors experience Malta’s rich history and culture.

Their program included a visit to Valletta, the European Capital of Culture 2018, St John’s Co-Cathedral, a UNESCO world heritage site, the Museum of Archaeology, the Maritime Museum, The Silent City of Medina, Gozo, and the fishing village of Marsaxlokk. The authors took part in a book-signing event for local fans at Agenda Bookshop in Tigne Point.

During a discussion about the visit of the three American authors, MTA CEO Paul Bugeja said that: “The US market is being very receptive of MTA’s marketing efforts and these have continued to intensify in 2015. The primary concentration has been on participation in International Travel Fairs and Exhibition as well as on a vast program of PR and marketing efforts with US tour operators, online travel agents, group organizers and tourism industry media which MTA has identified as the fastest and most effective channels to reach the US international traveller considering trips to Europe.

David Woodward, General Manager, Corinthia Palace Hotel & Spa, added "Corinthia is pleased to support MTA's promotional efforts especially in the American Market because we have found that Malta, the hidden gem in the Mediterranean, has great appeal to the more sophisticated and independent U.S. traveler.”