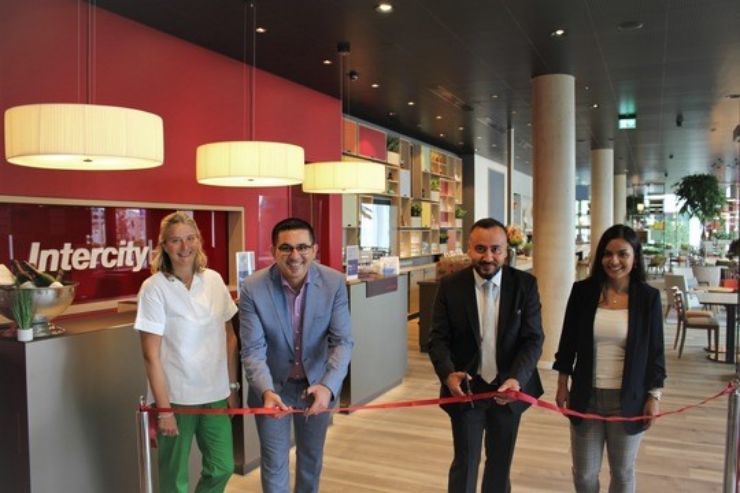 The four-star IntercityHotel Saarbrücken becomes the latest hotel to operate under the brand. Today's new opening takes place at the very heart of Europe.

It is located opposite the Congress Hall, right in the city centre as usual, and offers 170 comfortable guest rooms designed by the Italian architect Matteo Thun as well as a restaurant, a BistroLounge and five conferencing and events rooms. The main station is only 300 metres away. Sights such as Saarbrücken Castle and various museums are easily accessible on foot. The project has been developed in conjunction with the ALTIN-Immobiliengruppe.

“As the capital city of the Saarland, Saarbrücken acts as an economic and cultural centre for the cross-border Saar-Moselle metropolitan area,” said Joachim Marusczyk, founding Managing Director of IntercityHotel GmbH. “This makes it an extraordinarily attractive location. Tourism across the whole of the region is also showing very positive signs. Such a perfect combination of French savoir vivre and German attention to detail provides an outstanding match for our innovative hotel brand, which is characterised by digital offerings, a high quality of service and a stylish and modern atmosphere.”

Suat Cavdar, General Manager of the IntercityHotel Saarbrücken, added: “Our new IntercityHotel Saarbrücken is both a great venue for business meetings and an excellent starting point for those wishing to explore the city and surrounding region. The FreeCityTicket scheme is included and enables our guests to use local public transport free of charge. The IntercityHotel App allows them to check in and check out in a straightforward and contactless way and functions as a digital room key.”

The hotel as a gallery

Photographic art will be on display in the public areas of the hotel from the opening day. Mats Rune Karlsson and Sari Schildt have put together an exhibition entitled “Schnittpunkt” with the idea of creating a bridge between their various photographic observations to meld both viewpoints into a new cityscape. This presentation is being staged as part of the “Kunsträume” project, a cooperation agreement between IntercityHotel and the Bielefeld University of Applied Sciences which gives young artists the opportunity to showcase their works in selected IntercityHotels. Each photographic project is based on the implementation of an individual topic and thus enables the city to be perceived from an entirely new angle.

The first guests at the IntercityHotel Saarbrücken will benefit from particularly favourable conditions under the terms of an “Opening Special” offer, which will be available for bookings made during the period from 1 July to 20 September 2020.

More than 40 IntercityHotels can be found at major transport hubs both in Germany and at international destinations. IntercityHotel is an innovative Deutsche Hospitality brand which offers modern conference facilities and accommodation. Digital services are also available via a special IntercityHotel App.