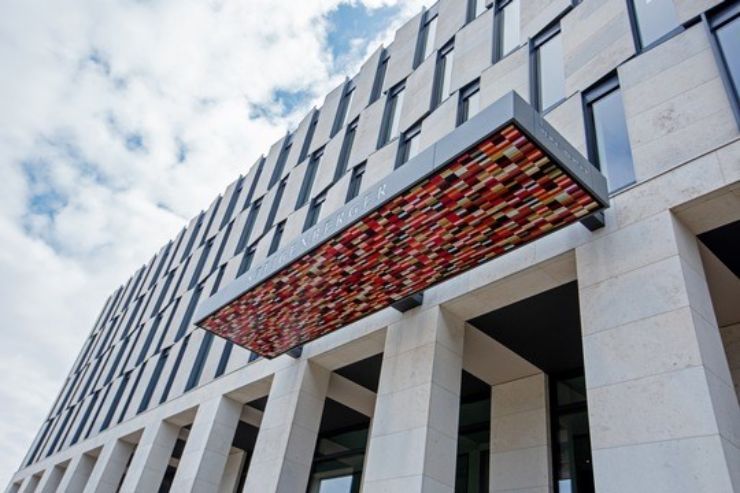 The new Steigenberger Airport Hotel opened its doors to travelers on the same date that the Berlin Brandenburg Airport (BER) went operational.

"We are very pleased that the ECE Group now has a further pillar in Brandenburg in addition to the Stern-Center and the logistics centre in Königs-Wusterhausen and is finally able to officially open it," said Brandenburg's Minister for Economic Affairs, Labour and Energy.

"This building is not just a tourist destination. It is the airport hotel in a prime location. A hotel like this simply belongs in the vicinity of a modern airport in the capital. And even if the pandemic will continue to pose major challenges for some time to come, we can certainly give this hotel a good outlook today. The opening of the Steigenberger Hotel am BER is a further building block in the development of the airport region, which is increasingly becoming a booming location for research and development, for ideas and innovations, for new beginnings and new settlements".

"We are delighted to be able to open the Steigenberger Airport Hotel some eight years after its completion on the day that BER goes into operation," says Andreas Mattner, Managing Director of ECE Development. "The hotel scores particularly well with its location directly at the new Capital Airport and in the immediate vicinity of the terminal building - an important prerequisite for successful operations."

"The Steigenberger Airport Hotel Berlin already has a unique history. The entire team around our hotel director, Steffi Wisotzky, is looking forward to inspiring guests from all over the world just a few steps away from the terminal and enriching the 90-year Steigenberger tradition with another milestone," says Claus-Dieter Jandel, Executive Vice President & Chief Development Officer of Steigenberger Hotels AG. "The fact that we are able to open this wonderful hotel is particularly thanks to our partner, ECE, whom we would like to thank for the trusting and successful cooperation today".

The Steigenberger Airport Hotel is the only hotel at the BER which is situated right next to the main terminal. It will be operated on a long-term basis by Steigenberger Hotels & Resorts. The hotel was planned, developed and realised by ECE, a Hamburg-based specialist property developer. ECE is one of the top 3 hotel development companies in the German-speaking countries and had already completed the project by the time when the BER was originally scheduled to open.

The Steigenberger Airport Hotel has 322 sound-proofed rooms and also features an à la carte restaurant with adjoining bar. A spa and health and beauty facility on the fifth floor extends over an area of 300 square metres as well as offering a separate gym. A conference centre with eleven meeting rooms capable of accommodating up to 500 persons provides an ideal and easily accessible airport setting for events, meetings and product presentations.

The Steigenberger Airport Hotel has been awarded a Gold Certificate by German Sustainable Building Council (DGNB). This accolade recognizes achievements such as the energy-efficient and functional design of the building, the use of district heating and cooling, the introduction of building automation processes in order to save energy and heat recovery in the ventilation systems.