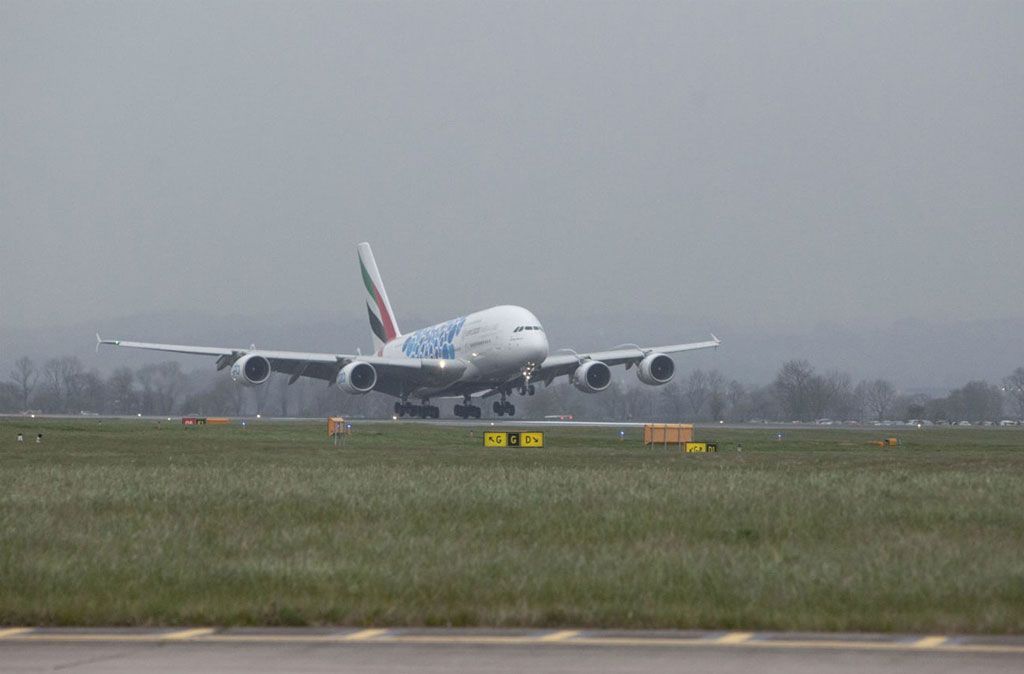 Glasgow Airport and Emirates have made Scottish aviation history by launching the first regular service of the iconic Airbus A380 aircraft to Scotland.

Thousands of people gathered at the airport to witness the arrival of inaugural flight EK025 as it touched down on Glaswegian soil.

Emirates is famed for redefining air travel with its A380. The plane is the world’s largest commercial passenger aircraft, with a wingspan of 79.8 metres - more than twice the height of Glasgow Cathedral.

Its famous double-decker cabin will accommodate up to 489 passengers, benefitting from improved comfort and industry-leading on-board features.

The A380 offers unparalleled luxury for a passenger aircraft, with game-changing additions such as the on-board shower spas in First Class and an on-board lounge, where First and Business class passengers can relax at the bar whilst enjoying a cocktail mixed at 43,000 feet.

To prepare to receive the A380 on a regular basis, Glasgow Airport invested more than £8 million to upgrade its infrastructure as the aircraft can weigh up to 575 tonnes.

The arrival of Emirates’ A380 marks a new daily service between Glasgow and Dubai that will run from today until 30th September 2019. While an A380 aircraft has touched down in Scotland before, this is the first time in history an A380 has been in regular service to Scotland.

The new A380 service coincides with Emirates’ fifteenth anniversary of flying from Glasgow. Since the introduction of the Glasgow Dubai service in 2004, over 4.5 million passengers have travelled between the two cities and further afield through Emirates’ network of 158 destinations.

Richard Jewsbury, Vice-President UK, Emirates, commented on the new service launch: “The arrival of the A380 is a new milestone in Emirates’ 15-year relationship with Glasgow Airport and a step forward for Scottish air travel. Our flagship aircraft continues to capture the imagination of passengers, more than 10 years after it first took flight, and they love flying it.

“During its six-month visit to the city, the daily service will give thousands of travellers through Glasgow the chance to experience the best in air travel while enjoying the incredible Emirates features an A380 offers. The demand for our services out of Scotland has been very positive and this new service is a fitting way to celebrate Glasgow’s fifteenth anniversary.”

Mark Johnston, Glasgow Airport Managing Director, said: “Watching this incredible aircraft touch down on our runway is an experience that will live long in the memories of everyone involved. It may have only taken just a few moments for the Emirates A380 to land, but the planning and effort that has gone into bringing this iconic aircraft to Glasgow Airport has been years in the making.

“Emirates’ Glasgow Dubai service has been a huge success story for Scotland during the last 15 years. By investing more than £8 million in upgrading our infrastructure, we are confident Scotland’s busiest long-haul route will continue to flourish thanks to premium service offered by the introduction of the Emirates A380 aircraft.”

Cabinet Secretary for Finance, Economy and Fair Work Derek Mackay said: “It’s fantastic to see the Airbus A380 operating on the Glasgow-Dubai service. It’s a real vote of confidence in both the airport and Scotland as a whole, and shows the importance of the route to Emirates.

“This service plays an important role for Scottish businesses, making it easier for them to access global markets. It also offers Scottish travellers a huge range of connecting destinations from Dubai. Of course, the A380 is an iconic aircraft in itself and will no doubt prove a popular draw for aviation fans across Scotland.

“I congratulate Glasgow Airport and Emirates on the continued success of this route, and look forward to watching it go from strength to strength in the future.”

Councillor Susan Aitken, Leader of Glasgow City Council, said: “To have such an iconic aircraft connecting Scotland with one of the world’s busiest and best connected hub airports is a major step towards - and vote of confidence in - our global Glasgow aspirations.

“It’s vital for our economy and growing tourism sector that we continue to improve upon our international connectivity and secure access to growing and emerging markets across the Asia.

“We will continue to work with Glasgow Airport, carriers and other partners to further the city’s success.”

The A380 flying between Glasgow and Dubai has a three-class configuration, with 14 private suites in First-Class, 76 lie-flat seats in Business Class and 399 spacious seats in Economy Class. Thanks to the A380’s widened cabin, passengers can enjoy more space across all classes, complemented by Emirates’ best-in-class hospitality and service. All Emirates A380 passengers can choose from over 4,000 channels of movies, TV shows, music and games on demand on the inflight entertainment system ice.

In addition to transporting passengers, Emirates’ SkyCargo on the A380 will carry key Glaswegian exports across the world, including Scottish whisky, salmon, cheese, chocolate and oil well equipment. The most popular destinations for Scottish salmon, shellfish and oysters include China and Hong Kong, while Scottish Whisky is most frequently exported to South Africa, Singapore, Sydney and Korea.

Emirates is the world’s largest A380 operator and since 2008, the airline has flown over 150 million passengers on its A380 fleet. The new service will run from 16th April until 30th September. Thereafter, the service will revert to a twice daily Boeing 777 operation.