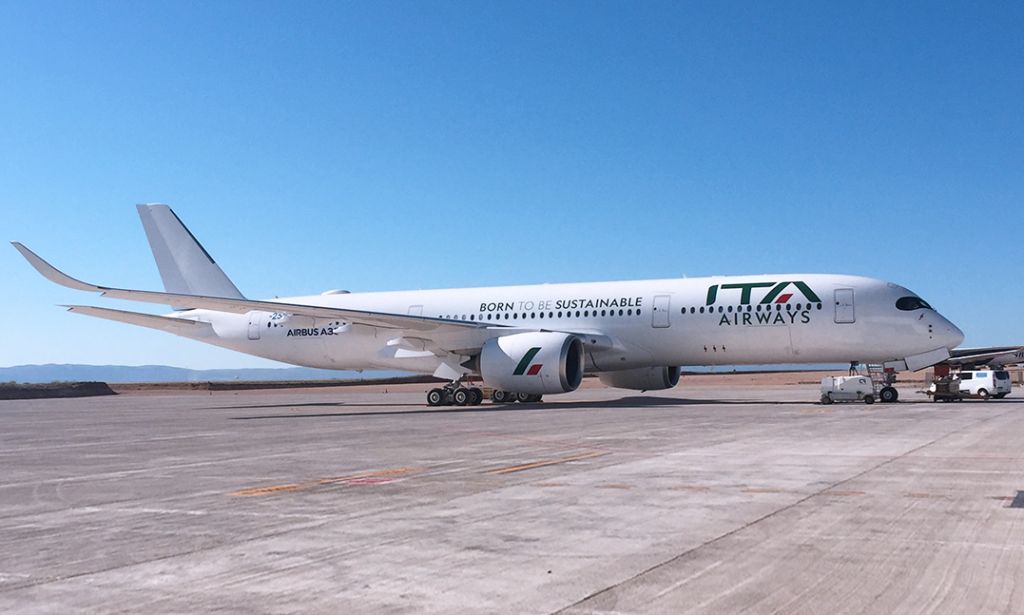 ITA Airways is participating for the first time in the Farnborough International Airshow (FIA) taking place in Farnborough, UK from the 18th to the 22nd of July 2022.

The 2022 FIA is the first airshow after the pandemic and the first ever for ITA Airways. Therefore, it will be a great opportunity to present the new Italian flagship airline to the international press at a press conference held on July 19 at 3:30 PM BST at the Airbus Pavilion, Auditorium.

To honor the occasion, ITA Airways will be showcasing its flagship aircraft, the new Airbus A350 with blue livery: the fifth of its kind to join the new ITA Airways fleet of new generation aircraft.

During the event, Fabio Lazzerini, will illustrate the Company's achievements over the last nine months and its commitment to sustainability. Indeed, ITA Airways aims to become the greenest airline in Europe, with 75% of its fleet featuring environmentally-friendly aircraft by 2025.

Centre stage at the event will be taken by ITA Airways’ Manifesto of Sustainability which represents the commitment of the Company towards the planet and the people. The Company’s sustainability strategy combines business growth with the creation of long-term sustainable values.

Key symbols of ITA Airways' dedication to sustainability are the six new Airbus A350 ordered. One of these, named after the excellence of Italian Sport Enzo Bearzot, will be exhibited at the airshow. The new A350 is distinguished by the Company's new contents, including the new interiors designed by Walter De Silva, which demonstrate ITA Airways ability to combine elegance with sustainability.

The new A350 represents the first step toward a sustainable future for the Company because it is lighter, quieter, and more efficient than any previous generation aircraft.

Cutting-edge aerodynamics and the highly efficient Rolls-Royce aero-engine (the Trent XWB) optimize range and payload for greater efficiency. In fact, thanks to the new aircraft, ITA Airways will benefit from a reduction of more than 25 percent in fuel consumption and CO2 emissions per seat.

More new generation aircraft will join the ITA Airways fleet, such as the Airbus A220-300, which is scheduled to arrive in autumn.

ITA Airways network and local offer in the UK market

The air connection between the United Kingdom and Italy has always been a priority to ITA Airways. Therefore, in the last months, the Company has established more than 90 weekly roundtrips between London and its two hubs: Rome Fiumicino and Milan Linate. Two are the daily flights from Rome and Milan Linate to London Heathrow, offering a total of 28 weekly round-trip flights from Rome FCO and Milan LIN, respectively, and 36 weekly round-trip flights from Milan LIN to London City airport. From these two destinations, passengers from the UK will be able to continue flying with ITA Airways to 6 intercontinental, 30 international and 21 Italian destinations.

All ITA Airways flights can be purchased on the ita-airways.com website, from the ITA Airways Call Center, or from travel agencies and airport ticket offices.