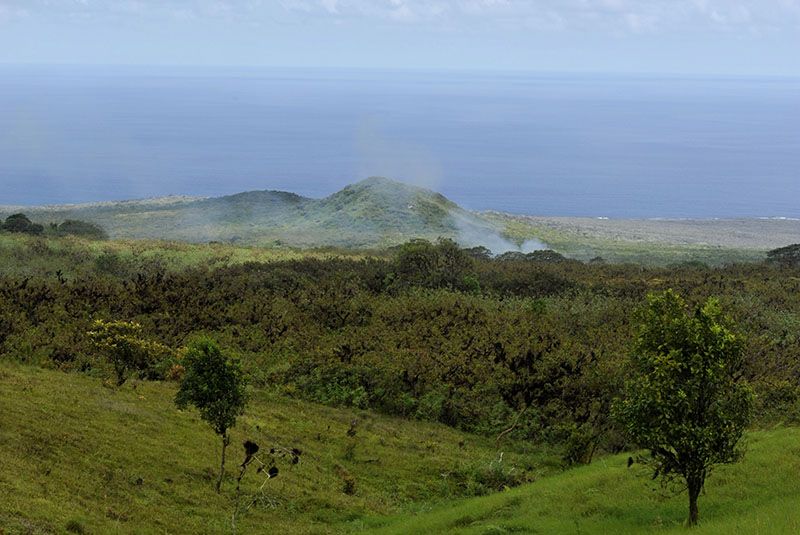 The Galápagos Islands are home to some of the world’s most amazing wildlife encounters. The isolated chain of 19 islands emerged alone from the rest of the world and its ecology developed in its own unique way. Guests at the upcoming Six Senses Galapagos will, therefore, experience a one-of-a-kind (literally-anywhere-on-earth) natural environment.

Six Senses Galapagos is located in Cerro Verde on the northeastern coast of San Cristobal Island. This is the quietest of the main islands, blessed with a relaxed, tranquil vibe.

UNESCO recognized the Galápagos Islands as a World Heritage Site in 1978 and a Biosphere Reserve in 1985, and development is only permitted on three percent of the total area. In accordance with strict local laws, and with strong involvement from the local community during the project’s early design and visioning stages, allowance has been granted to develop the resort on a beautiful and verdant hill with unspoiled views of the ocean and other topographical landmarks.

While final accommodations are being finalized, the master architectural direction by Hitesh Mehta Design focuses on a necessarily idiosyncratic planning philosophy, which balances economic, environmental, social and spiritual aspects of the project.

“Sustainability is at the core of our brand, influencing everything from ongoing community engagement and conservation efforts to the local, repurposed materials used in the development. We are excited and delighted to work with Orgal Group on this extraordinary project in such a special and environmentally sensitive place, staying true to our joint purpose of ecosystem restoration, scientific research of marine species and low-impact tourism,” said Chief Executive Officer Neil Jacobs of Six Senses Hotels Resorts Spas.

In particular, the focus is on restoring the original endemic Miconia ecosystem, eradicating invasive species and maintaining a native plant nursery on site.

Plans are already underway for an Earth Lab and Experience Center. The first will showcase the project’s sustainability efforts and the second will host research and educational activities by well-respected academics and NGOs already engaged in the Galápagos. The almost zero light pollution ensures night skies are some of the most spectacular on earth, and an Observation Post will serve up a heady cocktail of stargazing and fine dining. All three facilities have been designed by world-renowned bamboo architect Simon Velez.

Wherever Six Senses goes, its spa is sure to follow. The functional fitness center, yoga studio, comprehensive wellness programming, Alchemy Bar and local healing and herbalist treatment offerings will be a highlight of any stay. Following the guiding principles of Eat With Six Senses, the food and beverage program will minimize the need to import any produce. The ultimate aim is self-sufficiency, with an organic vegetable garden complementing produce grown by local farmers or caught by local fishermen. There will also be a Fermentation Room where the joys of pickling and preserving result in spectacular and transformative effects for guests’ gut-brain health.

The Galápagos Islands were named by 16th-century Spanish sailors after the saddle-shaped shells (“galápago”) of their most famous resident, the giant tortoise. The eldest of these creatures was born long before any living human, and it will hopefully be a while before it grows old and dies. It is unlikely tortoises arrived on the island as giant animals, so from an evolutionary standpoint, it is quite unique to witness the environment that triggered such adaptations. Darwin’s Origin of Species will forever be linked to the islands, as it was the wildlife he saw here that inspired him to develop his Theory of Evolution. All is explained at the island’s giant tortoise reserve “La Galapaguera de Cerro Colorado”, a short bike ride from the resort.

From there, it is not far to the enchanting and secluded Puerto Chino beach, where the narrative arrives back full circle to wildlife encounters. Guests can swim in close proximity to sea lions, manta rays and turtles, a thrilling and emotional experience no matter how many times it is done or head up a path to the right where the blue-footed boobies hang out. Another nearby local attraction is the El Junco lagoon, which harbors a large population of birdlife including the endemic San Cristobal mockingbird, white-cheeked pintail and frigate birds, often spotted cleaning the salt off their feathers.

San Cristobal also boasts Kicker Rock, perhaps one of the most well-known landmarks, towering 140 meters above the Pacific Ocean and eroded by the sea over thousands of years to resemble a sleeping lion. It is a popular site for snorkeling and diving due to the incredibly preserved ecosystem making it an underwater paradise. No trip to the island will be complete without saying a friendly hello to any number of the Galapagos albatrosses, sea lions (in abundance at the La Loberia colony), playful seals and marine iguanas; expect to meet them all.

Chief Executive Officer Arturo Kayser of Orgal Group said, “The Galápagos Islands are a magical destination with a unique place in natural history. Our guests will come face-to-face with their raw beauty and experience the extraordinary wildlife which inspired Charles Darwin to develop his Theory of Evolution. Joining forces with Six Senses represents a great alignment of visions: a commitment to sustainability and preservation of the environment while enhancing social and economic benefits of the local community. We’re excited to be working on this iconic project with them.”

Six Senses Galapagos is located a 35-minute drive from the San Cristobal airport at Puerto Baquerizo Moreno. The resort is slated to open in 2021.