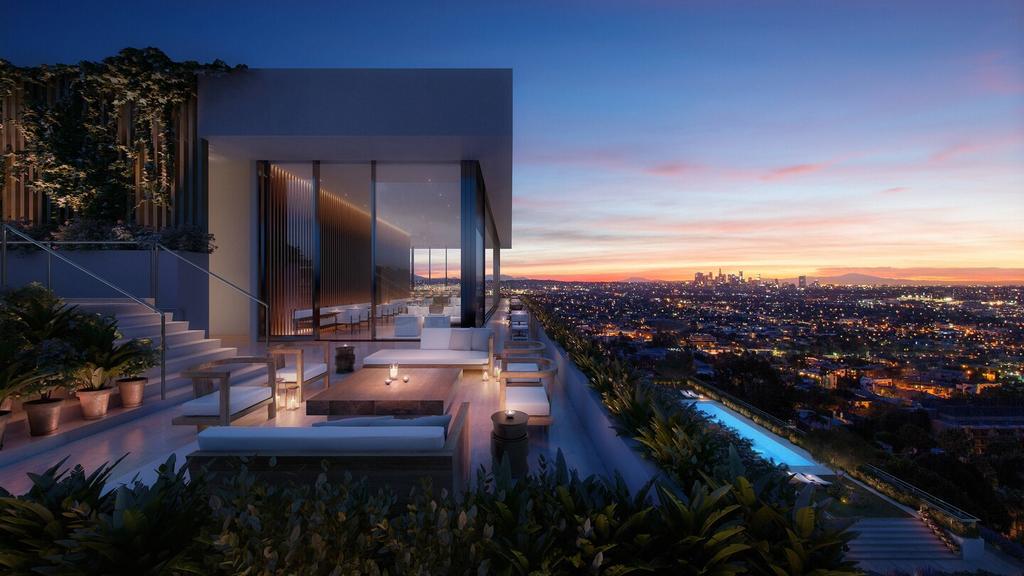 The West Hollywood EDITION arrives just in time to punctuate the Southern California landscape with an excitement and energy reminiscent of the cultural revolutions that took place there in the Sixties, Seventies and Nineties.

Ian Schrager, in partnership with Marriott International, brings the first true luxury hotel experience to the Sunset Strip and also the only West Coast location in the EDITION collection, in addition to 20 one of a kind residences that sit atop of the property.

As Los Angeles continues its evolution into a world-class city for art, fashion, food and technology – in addition to its reign as the entertainment capital of the world – the spotlight is shining ever more brightly on one of its most fabled districts, West Hollywood. Nestled between Beverly Hills and Hollywood, it was home to restaurants and nightclubs favored by movie stars in the Thirties and Forties; The Rat Pack’s stomping grounds in the Fifties (the site where the hotel now sits was once occupied by the restaurant Scandia, where Frank Sinatra once had a private office and his own shower upstairs); and where, as a college student, Schrager witnessed its first renaissance in the late Sixties and early Seventies. In 1996, Schrager led Sunset Boulevard’s second rebirth with the opening of the Mondrian, a hotel that defined the boutique hospitality category. Nearly a quarter-century later, he returns to drive its third renaissance with a luxury urban resort that represents California of today and tomorrow.

“It’s been 12 years since we began working with Ian Schrager, and The West Hollywood EDITION marks our 10th hotel opening together. Our organic partnership has melded the best of what each of us brings to the table. With Ian’s expertise and vision on this particular project, The West Hollywood EDITION is an oasis of sophistication and quickly becoming a part of the fabric of the city’s culture,” said Arne Sorenson, President and CEO of Marriott International.

Every level of the hotel takes on different personalities, offering unique experiences, from the subterranean club Sunset to the 360-degree show-stopping vistas from the lush landscaped garden in the sky, to Michelin-starred chef John Fraser’s Ardor restaurant on the main level, along with a state-of-the-art multimedia performance and event space and a spa blending wellness, mindfulness and beauty.

California native Fraser, who is spearheading the food and beverage experience at The West Hollywood EDITION, has created signature restaurant Ardor as a showcase for vegetable-forward healthy California cuisine with flavors inspired by local ingredients. Recognized as one of the best vegetable chefs in the world, Fraser’s menu features an artful balance of produce and meats, using techniques from around the world and products sourced hyper-locally. Each dish is made with organic ingredients and focuses on the essence of food, prepared simply and presented socially for a contemporary culinary journey.

Ardor’s greenery-filled garden was built for al fresco dining in the finest traditions of Napa, transporting guests from the hustle and bustle of Sunset Boulevard to an idyllic respite. The cocktails, as well as those served in Lobby Bar, The Roof and Sunset, range from classic libations with a modern approach as well as bespoke creations emphasizing mezcals and tequilas. The wine selection will highlight Fraser’s connection with Northern California, where he trained before moving to New York in 2005.

The Roof at The West Hollywood EDITION offers dreamy 360-degree vistas that stretch from the ocean of Santa Monica to the skyscrapers of downtown Los Angeles. EDITION is one of the few buildings that offers both bird’s-eye views of the homes nestled in the green hills to the north, and the city lights to the south, making it a must-see during the day and night, where it seats 130 in a soaring glass and beamed indoor-outdoor space.

Marrying the most advanced multimedia technology with the comfort and service of a luxury hotel, The West Hollywood EDITION will be a premier partner for unique events and entertainment junkets taking place in Los Angeles. The state-of-the-art technology, floor-to-ceiling glass and hardwood-floored multimedia performance and event space also transforms into a theater-quality screening room complete with JBL and Dolby speaker systems and retractable stadium-style seating.

The 140 guestrooms and 50 suites feature a soothing and sophisticated light neutral palette and whitewashed Siberian Larch wood throughout that reflects the unique light and lightness of Los Angeles. Floor-to-ceiling sliding screens filter the sun while providing privacy, and mimic the timber screens that surround the ballroom and Ardor. EDITION signatures such as freestanding tubs and Le Labo products are found here too, and the signature Le Labo fragrance that has become a cult favorite among guests is also present throughout the property.

The Spa at The West Hollywood EDITION is the first luxury destination in Los Angeles to weave together wellness, mindfulness and beauty from within, through treatments and experiences that embrace healthy lifestyles and ecological well-being. Services rooms include technology-forward treatments with sound and light, recovery therapies to restore the mind and body, and ancient rituals such as self-guided meditation. Inner health and nutrition are a focus with plant-derived products, including essential oils. Finally, a 2,077-square-foot, 24-hour gym caters to all workout needs and will have the latest state-of-the-art fitness machines including Peloton bicycles. Echoing the light neutral palette of the property, the 4,516-square-foot, six-treatment-room spa is enveloped in washed Siberian Larch wood and venetian plaster, which has a smooth surface with the illusion of depth and texture.

Reservations are now open with opening rates starting from $395 (taxes and fees apply). The hotel will open in preview this Fall and launch officially November 12th, 2019.