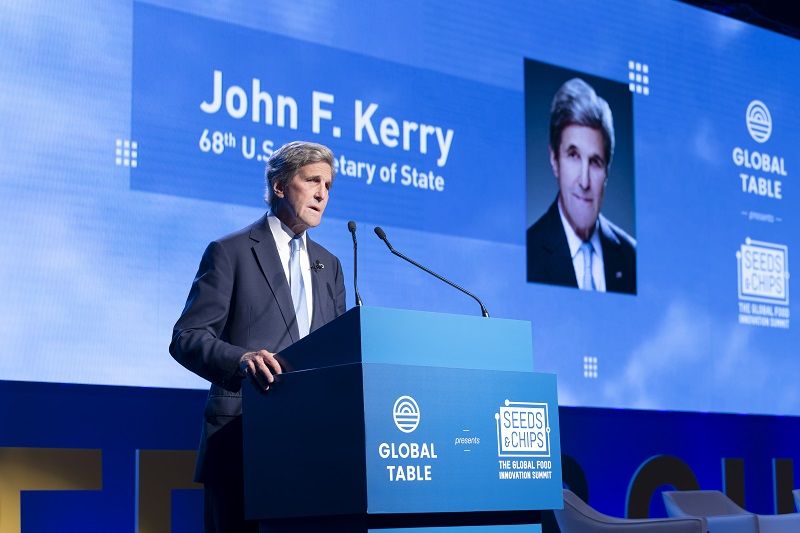 The former US Secretary of State John Kerry warned today in Melbourne that feeding a rapidly growing world population would be one of the greatest challenges of climate change.

The amount of food wasted was not sustainable with the impact of climate change and the world’s population set to rise from 7 billion to 9 billion in the next 35 years, said Mr. Kerry, in his opening keynote address at the Global Table conference at Melbourne Showgrounds on Tuesday morning.

The three-day food innovation and agribusiness summit brought together global industry leaders and innovators from the Asia-Pacific, America, Europe and the Middle East, to discuss the future of food.

While a third of all food went to waste in wealthy countries, nearly half of the 8,000 child deaths each day globally were caused by lack of food, said Mr. Kerry, who succeeded Hillary Clinton as secretary of state for the last four years of the Obama administration.

“Right now today every one in nine people wake up in the morning with hunger pains and they go to bed with an empty stomach,” Mr. Kerry said. “We have to increase food production by 60 percent between now and 2050 just to keep pace.”

Growing more food was only part of the challenge, said the former Democrat Party presidential nominee, who lost his 2004 bid for the White House to George W. Bush by only one state.

“We have to become better stewards of the land. The truth is we are not smart enough that way,” Kerry said. He also called for improvements to food storage, transport, and distribution.

“Anybody who persists in putting before people the notion that you have to make a choice: you either get to have jobs and prosperity or you can protect the environment and the future, that’s a lie,” he said.

“The choices of how we produce electricity, how we transport ourselves from place to place, how we do industry without polluting.”