IMEX America closes on another high 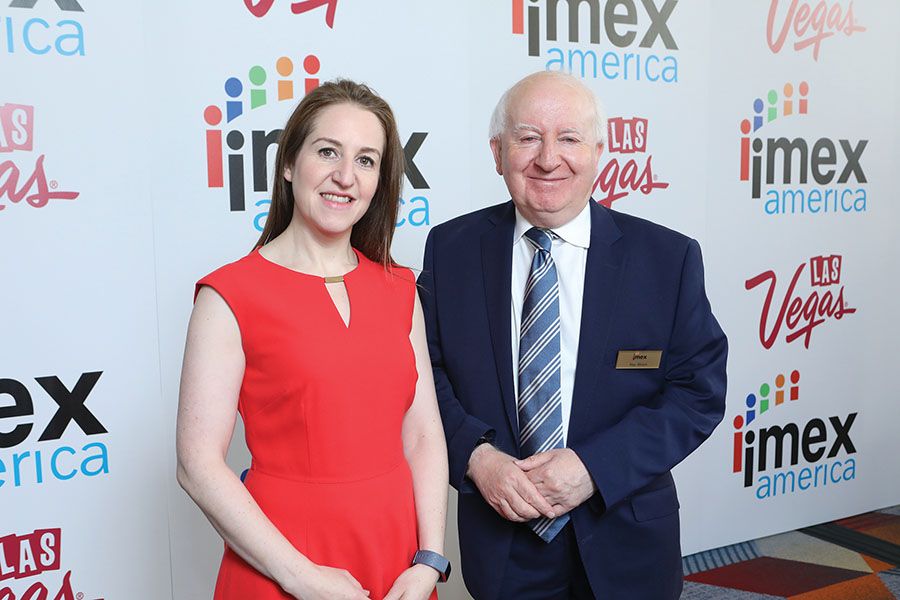 The ninth edition of IMEX America came to a close in Las Vegas yesterday after a week that left no one in doubt about the strength, vitality, and appetite for the business that currently defines the global meetings, incentive travel, and events industry.

“This edition has been our most imaginative yet, and for good reason given that our annual Talking Point and annual research white paper were both devoted to the Power of Imagination,” said chairman Ray Bloom at the show’s closing press conference.

“In an age that’s marked by an exceptional rate of change, particularly in technology, it’s impressive to see how the whole industry is embracing virtual reality and experiential activations. I can also testify that innovation, creativity, and imagination have been in rich supply here at the Sands Expo this week,” said Bloom.

Reporting on the number of pre-scheduled appointments made between buyers and exhibitors, a key performance metric for the show and its attendees, Bloom explained the show had achieved a new high with a 3 percent increase to 76,000 appointments recorded this week.

“As many of you know, every year we strive to be our own competition, to push ourselves to deliver richer experiences, better education and, of course, a really strong business pipeline for our exhibitors. Our partners keep rising to the occasion too. We’ve seen some spectacular booths and activations this year and are delighted to see so many exhibitors aligning with our annual Talking Point and using it so innovatively each year. Their level of investment and commitment to the business is remarkable. Equally the feedback about the quality and variety of our education program has been second to none this year.”

He went on to talk about the many industry “firsts” that had taken place during the week, including the launch of the Event Industry Council’s (EIC) new Center for Sustainable Events. EIC also announced that they plan to replace the old Apex standards with new EIC standards. In the process the standards have been consolidated and updated to make them more accessible for the whole industry; IMEX America is one of only two events that have committed to pilot them.

The signing by multiple partners of the Events Industry Sexual Harassment Task Force Pledge and the announcement of the events industry’s involvement in accelerating the 17 United Nations Sustainable Development Goals, which are the focal point of discussions at the UN Summit in New York later this month, also made this a stand-out edition of IMEX America. Other social justice issues, including ECPAT’s drive to encourage meetings and event planners to educate themselves on how to end child prostitution and slavery, were widely discussed at the show. IMEX is a proud sponsor of the ECPAT 20by20 campaign and has also signed the pledge.

Bloom recapped other highlights of the week, including dozens of high-level partner events such as EIC’s Hall of Leaders and Pacesetter Awards, MPI Foundation Rendezvous and SITE Nite. IMEX’s efforts to provide a wider range of healthier food and drink choices, including Impossible Burgers and Beyond Meat hotdogs had proved a big hit, together with its waterwise menu options. “We’re opening people’s eyes to what’s possible with health, wellbeing, sustainability and better nutrition on the road and during large events. We really appreciate all those partners who have stepped up to help us make these massive strides forward. It’s also noteworthy that, thanks to Sands Expo, this year’s show is 100% powered by renewable energy.”

Other themes ran strong throughout the week including diversity and inclusion, transformation and collaboration and sustainability, all of which featured in the IMEX Imagination research report, sponsored by PSAV. The report has been downloaded by 1,900 events industry professionals to date, a significant achievement for authors EventMB.com and IMEX.

Bloom also reminded his audience that 2020 see the 10th edition of IMEX America. He said: “We invite you all to share in our birthday celebrations. This isn’t about IMEX, it’s about you, your contribution and our collective desire to see this industry flourish, to use its influence and power responsibly and, above all, to grow in a sustainable way.”

In closing, Bloom announced the annual IMEX Talking Point for 2020 and 2021. “I’m delighted to tell you that, for the first time, we have a Talking Point that will run for two years. It’s a big, timely, important topic, one we can all relate to and one that warrants our full attention; that Talking Point will be “Nature.” We’ll be exploring what nature can do for us, and what we can do for nature and we’ll be running this theme over two years to give it the traction it deserves.”