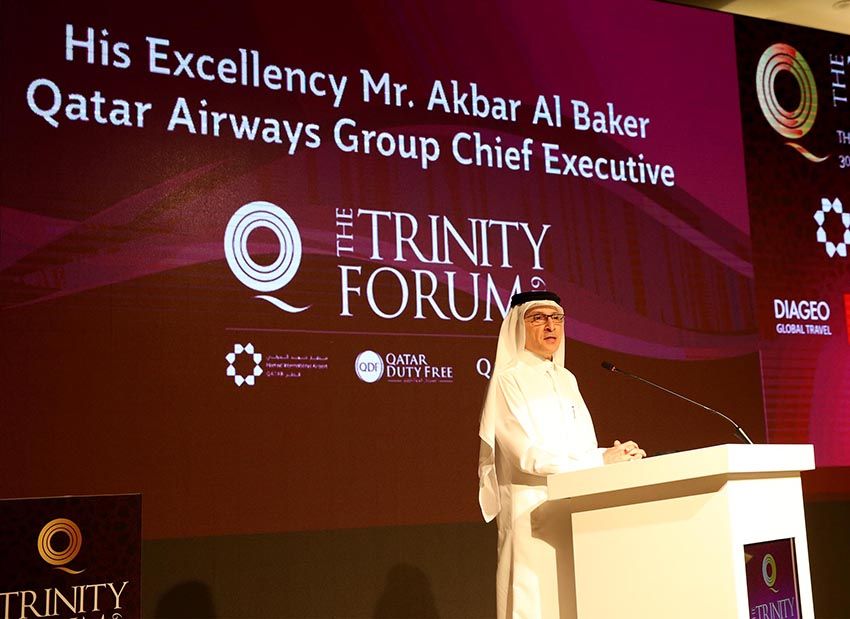 Hundreds of airport and retail industry leaders from around the world gathered today in Doha for the first day of the 2019 Trinity Forum.

Jointly hosted by Qatar Airways, Hamad International Airport (HIA), and Qatar Duty Free (QDF) under the patronage of His Excellency Mr. Jassim Saif Ahmed Al-Sulaiti, Minister of Transport and Communications of the State of Qatar, the Trinity Forum is an annual event organised by The Moodie Davitt Report, Airports Council International (ACI), and ACI Asia-Pacific that aims to explore how airports, concessionaires, and brands can work together for the benefit of consumers. This year’s edition – a two-day event held at the St. Regis Doha – marks the first time the conference is hosted in Qatar and co-hosted by an airline carrier.

Qatar Airways Group Chief Executive, His Excellency Mr. Akbar Al Baker, welcomed guests at the opening ceremony. In his speech, he talked about the importance of innovation and creativity for the airport retail industry. 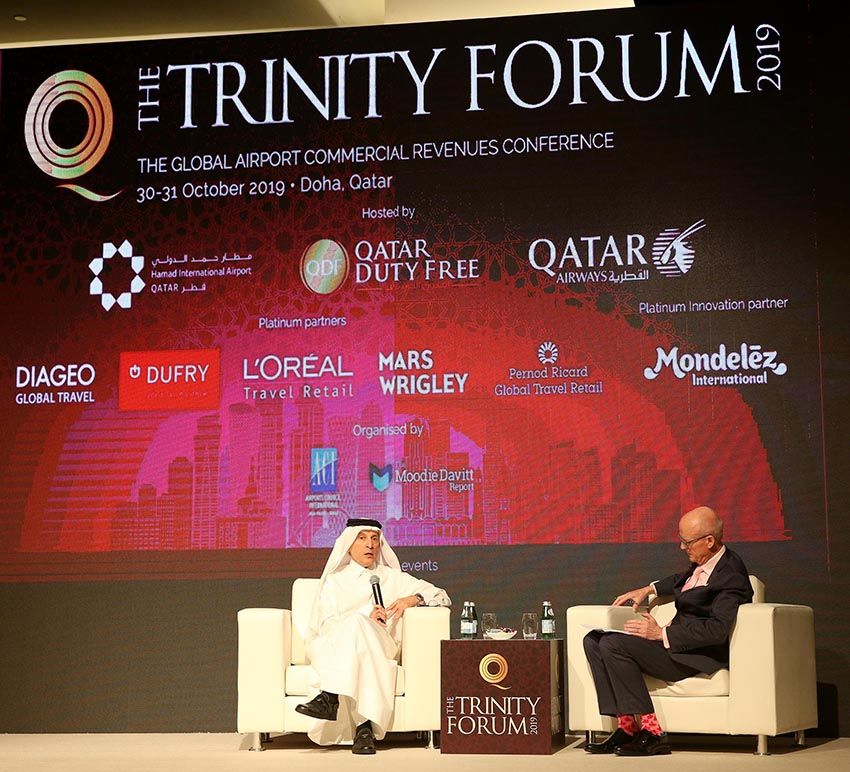 H.E. Mr. Akbar Al Baker said: “The retail environment at airports plays an important part in a passenger’s journey, and the Qatar Airways Group is unique in the industry in its ability to manage and deliver an outstanding customer experience across all touch points through our own trinity of airline, airport and retailer. Together, we are able to implement next generation ideas and enhancements.

“As we expand Hamad International Airport, it is even more important to provide an airport experience like never before to our passengers. To do this, we will be looking to continue our longstanding relationships with existing partners, as well as introducing new ones. The 2019 Trinity Forum provides a great opportunity to foster new partnerships.”

The Qatar Airways Group offers passengers unrivalled, award-winning services throughout their journey. HIA was ranked as the fourth-best airport in the world at the 2019 Skytrax World Airport Awards, while QDF was named ‘Airport Retail Operation of the Year’ at the 2019 DFNI-Frontier EMEA Awards.

Together, HIA and QDF curate memorable luxury and retail experiences for travellers. This year alone they unveiled the first Qatar Airways Boutique at HIA, opened the Penhaligon’s Made to Measure pop up shop as an airport world-exclusive, and complemented HIA’s two Harrods outlets by launching the Harrods Tea Room – a first for an airport. It also staged the largest airport podium for Puig brands Paco Rabanne and Carolina Herrera, called Pacomarket/Carolina Hotel.

HIA recently revealed plans for its second expansion phase, which will feature a spectacular 10,000 sqm indoor tropical garden, a 268 sqm water feature, and 11,720 sqm of landscaped retail and F&B space. Expansion will allow the airport to increase its capacity to accommodate 53 million passengers annually by 2022 and to 60 million in the years after the FIFA World Cup Qatar 2022™.

A multiple award-winning airline, Qatar Airways was named ‘World’s Best Airline’ by the 2019 World Airline Awards, managed by Skytrax. It was also named ‘Best Airline in the Middle East’, ‘World’s Best Business Class’, and ‘Best Business Class Seat’, in recognition of its ground-breaking Business Class experience, Qsuite. It is the only airline to have been awarded the coveted “Skytrax Airline of the Year” title, which is recognised as the pinnacle of excellence in the airline industry, five times.

Qatar Airways currently operates a modern fleet of more than 250 aircraft via its hub, Hamad International Airport (HIA), to more than 160 destinations worldwide. The world’s fastest-growing airline has added several exciting new destinations to its growing network this year, including Rabat, Morocco; Izmir, Turkey; Malta; Davao, Philippines; Lisbon, Portugal; and Mogadishu, Somalia; and Langkawi, Malaysia. The airline will add Gaborone, Botswana in 2019 to its extensive route network along with Luanda, Angola; and Osaka, Japan, in 2020.