40 of the Best Italian MICE Suppliers to Meet 55 Buyers 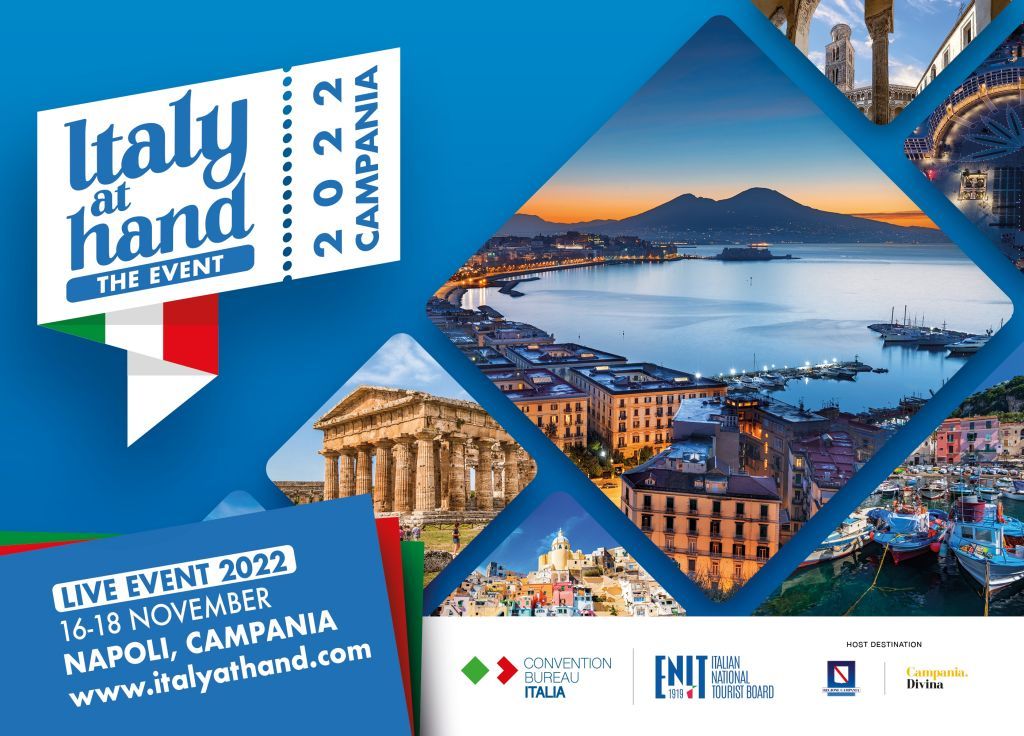 In less than just two months, some of the best European MICE buyers will once again have the chance to discover Italy’s timeless beauty during the fourth edition of Italy at Hand – 2022 Campania, an edition that will be remembered for being the starting point of its evolution.

In fact, the event will include, as usual, 3 days of networking, distinguished by the seamless integration of business and entertainment. However, this year there will be 40 of the best Italian MICE suppliers meeting 55 buyers - against the 45 buyers and 35 suppliers of the previous editions, with 4 signature activities connected to the emotions, images, sensations, and inspirations sparked by Italy’s identity and its traditions and in-depth post-tours discovering Campania's hidden gems.

Upon the event’s launch, it was already highlighted that for the first time in its history, the event would take place in multiple destinations in Campania, underlining Italy’s crucial advantage of being the quintessential ‘multi-destination’ for MICE events. Today we can finally unveil the three venues that will be hosting the main B2B event in Napoli; three unconventional venues infused with the all-Italian balance between a glorious historical and cultural heritage and the perks of a modern, mature MICE Destination.

After last year’s edition, which boasted a venue that hosted -among others- Napoleon Bonaparte and W.A. Mozart, this year the tradition will continue: Italy at Hand’s opening night will take place on November 16th at Palazzo Caracciolo, a hotel located in a historical building right in the thriving heart of Napoli, imbued with the warmth and beauty of the city. The building is steeped in history, having not only been the residence of the aristocratic Caracciolo family, but also that of the King of Naples, Joachim Murat, Napoleonic commander, and statesman: truly a venue fit for kings. Palazzo Caracciolo represents a harmonious synthesis of sobriety, elegance, design and comfort, in which participants will also embark in an unforgettable gastronomic journey, experiencing Neapolitan hospitality at its finest.

Napoli, as almost every coastal city, is a city with the sea in its DNA; a city whose port meant a fecund cultural and commercial exchange over the centuries since the times of the Greeks and the Romans. No other venue could better reflect that thriving atmosphere of exchange than Napoli’s Stazione Marittima (Italian for ‘maritime station’) that will host Italy at Hand’s B2B sessions on November 17th and 18th. The Stazione boasts a modern congress center with 18 multi-purpose rooms distributed over an area of over 3,300 square meters, with a maximum capacity of about 1800 pax. The room that will host the B2B meetings is located at the very tip of the congress center, equipped with spectacularly large windows overlooking the Gulf of Naples.

The third venue is also deeply rooted into Napoli’s glorious past, a true masterpiece of Gothic and Baroque art: The Donnaregina Monumental Complex - Diocesan Museum of Naples will host Italy at Hand's Gala Dinner on November 17th, which will have participants embark on a journey through centuries of history. The Monumental Complex is made of a cloister and two different churches who differ in age and style: Donnaregina Vecchia, whose origins go back to the 14th century when Mary of Hungary, Queen of Naples, ordered its restoration following the Gothic style; and the 17th century church Donnaregina Nuova, built when the Clarisse nuns who lived in the cloister fancied a new church, more suited to the Baroque taste of that time. The two churches were then linked by a small corridor -which still exists today- connecting the two apses: a sort of umbilical cord through different eras, through which one could move around without leaving the cloistered areas.

With less than two months to go, there are still few slots available to European buyers willing to apply to Italy at Hand’s fully hosted buyer programme. Beyond giving admission to the full event, participating will grant buyers travel, hospitality, and accommodation.