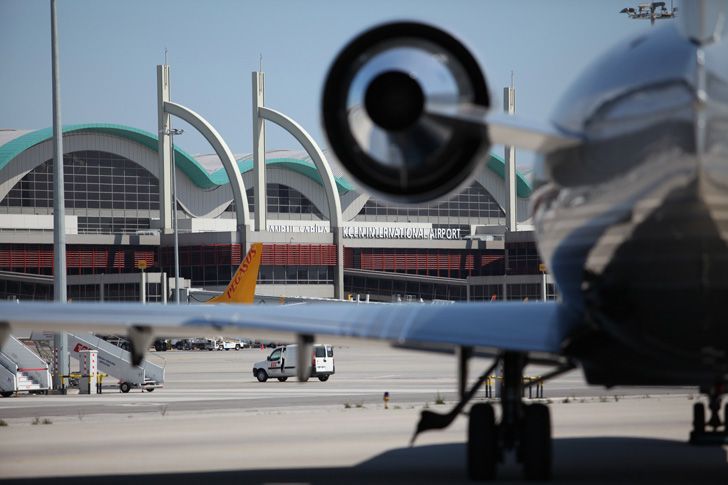 Analysis by ForwardKeys reveals that the major airports in the Gulf, Dubai, Doha and Abu Dhabi, are all losing market share of transit passengers to Istanbul.

ForwardKeys’ data for the first Quarter of 2018 shows that flight bookings for passengers changing planes in Istanbul are currently 21% ahead of where they were at this time last year whereas the equivalent transit bookings through Dubai and Doha are showing no growth and those through Abu Dhabi are 14% behind. The decline in Abu Dhabi is reflective of Etihad reducing capacity and dropping its partnership strategy. In terms of the relative size of transit business, Istanbul is bigger than Abu Dhabi but a quarter the size of the three major Gulf airports combined. 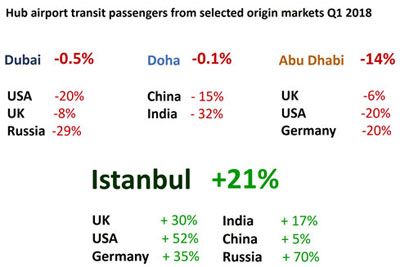 Istanbul’s growth is partly due to the success of specific routes including New York and Los Angeles to Tel Aviv, San Francisco to Delhi, London to Antalya, Hamburg to Antalya and Frankfurt to Tehran. Looking in more detail at the nationalities of those people in transit, the most significant increases are due to come from the UK, where bookings are 30% ahead of the equivalent point in 2017, the USA 52% ahead, Germany 35% ahead, India 17% ahead, China 5% ahead and Russia 70% ahead.

Istanbul will be pleased to take a bite of the transit segment because transit passengers often spend their time in the airport shopping and a growing number of them will make the airport a more lucrative proposition for the airport’s retailers.

On 29th October, Istanbul’s new airport is due to open officially. It aims to be a global aviation hub, serving 90 million passengers in its first phase. Eventually, it expects to become the world’s busiest, with six runways and capacity for 200 million passengers.

Olivier Jager, CEO, ForwardKeys, said: “In addition to the success of various routes, Istanbul’s growth has been helped by a reduction in terrorist incidents in Turkey since 2015, when a wave of bomb attacks hit both Istanbul the city and Istanbul the airport.” He added: “One also should pay tribute to Doha for maintaining its transit volumes in the face of a diplomatic spat with its neighbours, which saw Bahrain, Egypt, Saudi Arabia and the UAE close their airspace to Qatar Airways flights last June.”