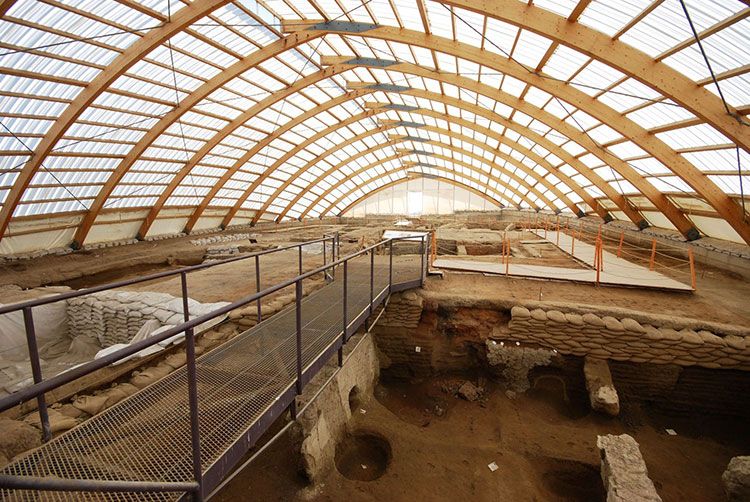 The research has suggested the Europeans and some population of northern Marmara share a genetic affinity with people of Anatolia’s Neolithic Site, Çatalhöyük, dating from 7400 BC. The scientific research published in the genetics magazine GENES has revealed the migration wave shaping the modern European societies started about 7400 BC and continued for thousands of years.

The DNA survey carried out in Turkey has proven the kinship of the modern European societies with that of Anatolia’s thousands-of-years-old neolithic site, Çatalhöyük, one of Turkey’s 18 archaeological sites on UNESCO’s World Heritage List, which is located within the provincial borders of Konya. According to the research revealed in March edition of GENES, the genetic tests on the skeletons found during Çatalhöyük excavations have proved the great migration wave that gave shape to the modern European societies began around 7400 BC and lasted for thousands of years leading into social interaction between communities. The EU-endorsed survey has also proposed new findings regarding the social structure of Çatalhöyük people, who underwent a remarkable transformation with the advent of agriculture and adapted to settled life.

Çatalhöyük says much about adaptation to a settled lifestyle

Situated in the Southern Anatolian Plateau, the Neolithic Site of Çatalhöyük covers an area about 34 acres within the provincial borders of Konya and sheds light on the history of humanity. The site is composed of two mounds, with the taller eastern one containing 18 levels of Neolithic occupation between 7400 BC and 6200 BC. The eastern mound also has wall paintings, reliefs, sculptures and other symbolic and artistic features mirroring the social organization as humans adapted to a sedentary life. 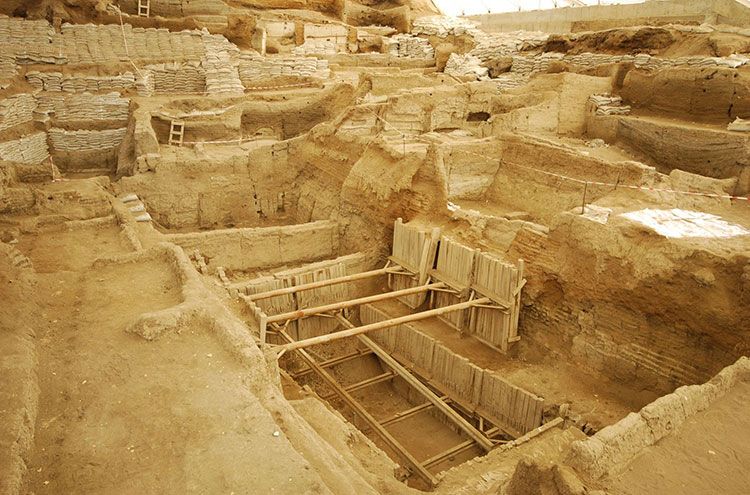 The western mound of Çatalhöyük demonstrates the cultural practices in the Chalcolithic period from 6200 BC to 5200 BC, and thus serves as a significant proof of humanity’s first steps towards city life from villages which existed in the same geography for more than 2000 years. Çatalhöyük exhibits distinctive architectural features. There were no streets or paths connecting houses; instead, homes were very close to each other, built back-to-back, forming a honeycomb-like maze, with holes in the ceilings or doors which could be reached by ladder to enter. Unlike other Neolithic settlements built in the Middle East and Anatolia, Çatalhöyük carries an outstanding universal value with the sizes of its ruins, population density, powerful artistic and cultural traditions, as well as its survival despite the passage of time.

Çatalhöyük was discovered in 1958 by Mellaart. Feminine figurines have been unearthed during the archaeological excavations, giving an authentic insight into the start of the cult of the mother goddess. These figurines, out of baked-clay and stone, are 5 up to 15 cm in size. Some are plump, with large breasts, belly and buttocks while others appear to be giving birth. They represent abundance and provide researchers with more insight into the mother goddess cult.

How to get and what to do there?

Çatalhöyük is located 10 km east of Çumra district of Konya, a province of Central Anatolia Region. There are regular flights from Istanbul to Konya, Turkey’s largest province by area. Also, the high-speed railways link Konya to Ankara and Istanbul. Besides Çatalhöyük, Konya is home to a myriad of touristic assets, one of which, beyond any doubt, is the green-tiled mausoleum belonging to Mevlana Celaleddin-i Rumi, who is well-known for his philosophy of love and tolerance.