SunExpress celebrates its 30th year with a special anniversary livery 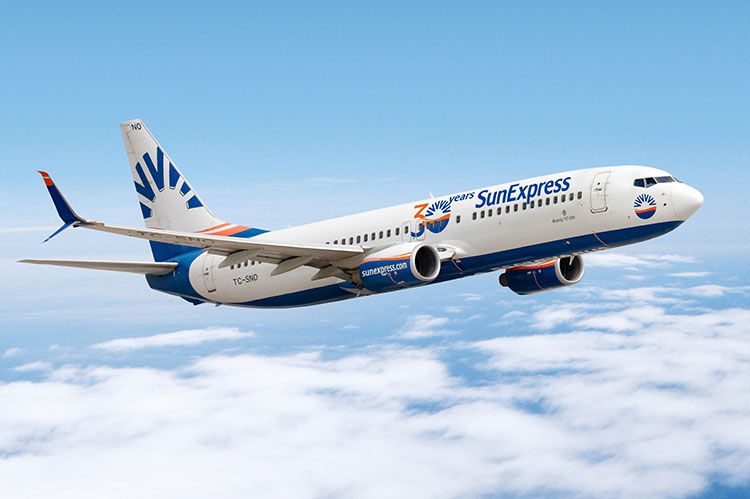 SunExpress, a joint venture of Turkish Airlines and Lufthansa, celebrates its 30 years by painting one of its aircraft with a special anniversary livery.

SunExpress, who has formerly painted its aircraft to a different livery to celebrate cooperation and to make air travel more fun, is now painting one of its Boeing 737 aircraft to celebrate its own birthday with a special 30th-year livery. This year, all aircraft in the airline’s fleet will have the same design.

The aircraft that landed in Antalya on October 1, will be the striating act of a series of events and campaigns to celebrate the airline’s 30th Year. As the airline that connects Antalya and Izmir to most domestic and international destinations, SunExpress will fly its newly painted aircraft to different cities around Turkey and Europe and its 30-year experience with its passengers.

Founded by the end of the 1980s as a joint venture of Turkish Airlines and Lufthansa, SunExpress aims to support and further the interest of German tourists for Antalya. SunExpress started its operations with just one aircraft, a Boeing 737-300, on 2 April with a flight from Frankfurt to Antalya. After just three years in business, SunExpress welcomed its one-millionth passenger and expanded its fleet fivefold. Today SunExpress stands as the airline that connects Antalya to the most domestic and international destinations.

SunExpress continues its ambitious growth and development and today the airline has 84 aircraft in its fleet. In 2018, SunExpress flew 10 million passengers to their dream holidays and loved ones and besides its touristic flights between Central Europe and Turkey, SunExpress is the backbone of ethnic travel thanks to its domestic network.

As one of the main supporters of Turkey’s tourism today, SunExpress is operating in 16 destinations in Turkey and 36 cities in Europe. In 2019 alone by adding 9 new destinations to its network, SunExpress continues to pursue its goal to be one of Europe’s most innovative and leading leisure airlines.