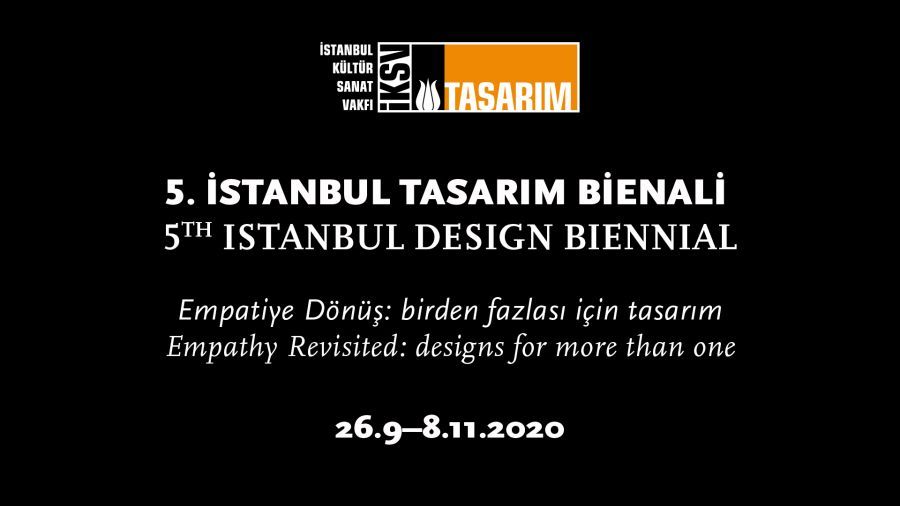 Organised by the Istanbul Foundation for Culture and Arts (İKSV) under the sponsorship of VitrA and with the support of the Republic of Turkey Ministry of Culture and Tourism, the 5th Istanbul Design Biennial opens on October 15, 2020.

Entitled Empathy Revisited: Designs for more than one and curated by Mariana Pestana with Sumitra Upham (Curator of Programmes) and Billie Muraben (Assistant Curator & Deputy Editor), the Istanbul Design Biennial will be held with a new structure with various projects, mostly being produced locally in Istanbul, by participants from various countries and disciplines, intervening in exhibition venues, outdoor spaces in Istanbul and digital platforms. The projects displayed in the exhibition venues will be open to visit until 15 November 2020 whereas the interventions in the city, research projects and video series will continue to evolve until 30 April 2021.

The 5th Istanbul Design Biennial brings together ideas and projects that seek to define a new role for design based on empathy. As a mediator of emotions and feelings, design is presented here as a practice that takes care as its main purpose. Designers adopt sensitive, diplomatic, sometimes therapeutic functions, with the aim of connecting us with one another but also with the world around us, with other species, with microorganisms, soil, water and even the universe.

Aspiring to carve out a space of responsibility and nourish a culture of attachment towards the more-than-human, this biennial explores designs for multiple bodies, dimensions, and perspectives. The projects on display encourage us to rethink practices of care and civility at this critical moment in time, and to collectively build new systems and structures for re-connecting. This biennial offers critical tools and alternative pathways in face of urgent climate and economic crises, a general state of social deprivation, and an exhausted global industrial model. Designs for more than one are those that take into consideration not just their immediate user or client but the many constituents and complex entanglements inherent to any design process.

Mariana Pestana said: “The current restrictions around social distancing became an opportunity to reappraise the standard model of the biennial and rethink our relationship with the environment. I believe that design can help us do exactly that, empathically. The new format of the 5th Istanbul Design Biennial proposes a completely new mode of engagement as we look into how design mediates our relationships with non-human subjects. It meets people where they are – out in the street, in parks or even at homes via Internet – to involve a broad range of people from both the local and global world. This biennial will also be an evolving conversation that begins this autumn and will extend for a longer period with many of the projects becoming long-term installations in the city or continuing their lifecycle digitally, thus, creating opportunities for new beginnings.

I hope that the biennial will create the context for designers to experiment, rehearse and imagine different futures and that it inspires a new, empathetic way to think about design.”

The 5th Istanbul Design Biennial presents a generative programme comprising three main axes: an online series titled Critical Cooking Show, a set of research projects on the Mediterranean basin to be archived at the Library of Land and Sea, and a series of interventions in the city titled New Civic Rituals.

The Critical Cooking Show is a digital programme of lectures and performances that form a critical commentary on our relation to food today and reimagine the kitchen as a space central to design thinking and production. As a series of episodes each hosted by art, design and architecture practitioners and thinkers, the Critical Cooking Show will explore how food exchange, preparation and consumption relates to urgent ecological, economic and geopolitical conditions.

Library of Land and Sea

Library of Land and Sea, a depository for 10 research projects that we commissioned to artists, designers and activists that are investigating politics of land and sea – and their connection to food – in the Mediterranean basin. Visitors can book a table at the library and explore the various research materials.

When? The projects will be presented in ARK Kültür from 15 October 2020 to 15 November 2020, with the projects continuing to evolve throughout 2021.

From communal cooking to gardens and playgrounds, the New Civic Rituals projects will be a series of interventions that generate new kinds of encounters with new public infrastructures across scales and bodies, comprising people but also birds, stars, plants, and microbes.

Where? The projects will spread across the city of Istanbul at Kalamış Park, Moda Park, Fenerbahçe Park Community Garden, Kuzguncuk Urban Garden and Kuzguncuk Pier in the Anatolian side; Beşiktaş Pier and Karaköy Pier in the European side, as well as Pera Museum.

When? The projects will be installed on 15 October 2020 and most of them will be long-term installations in the city with activations until April 2021.

The biennial will also present a screening of films that expand the notion of empathy, titled Empathy Sessions, at Pera Museum, and a series of satellite projects developed in collaboration with partnering cultural institutions.

The Istanbul Design Biennial has started a podcast series under the sponsorship of VitrA, which includes talks with the curators and participants of the previous biennials such as Zoë Ryan, Jan Boelen, Vera Sacchetti, Nadine Botha, Judith Seng, Camilo Oliveira and Emre Arolat. Through these conversations, the podcast guests reinterpret the exhibitions and projects from the biennial’s history that are still relevant today. The talks are available on İKSV’s Spotify account and Apple Podcasts.

The 5th Istanbul Design Biennial is organised by the Istanbul Foundation for Culture and Arts (İKSV) under the sponsorship of VitrA and with the support of Republic of Turkey Ministry of Culture and Tourism. Borsa Istanbul supports the biennial as the Foundation with the Highest Contribution. Biennial’s Experience Sponsor is Digilogue, a Technology and Creativity platform, powered by Zorlu Holding and Zorlu PSM.