Culinary Institute of America elects Robert Muh Chairman of the Board 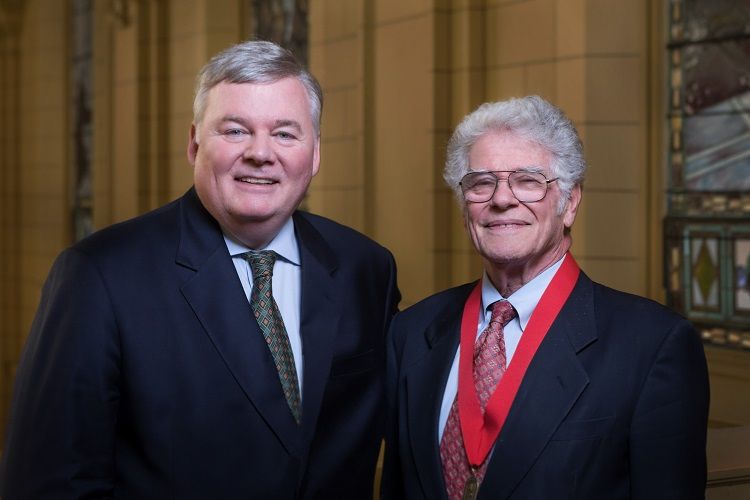 Highly regarded investor, economist, and philanthropist Robert Muh has been elected the 20th chairman of the board of The Culinary Institute of America. He succeeds former Ventura Foods CEO Richard Mazer in this important and distinguished position.

"Robert Muh (right) has had a successful and active career in the finance sector," CIA President Dr. Tim Ryan (left) said. "Bob brings valuable experience and financial insight to his role as board chair, and I look forward to working with him as we continue to move the CIA into the future."

Mr. Muh is the president of Sutter Securities Incorporated, a San Francisco-based broker-dealer. He was previously a senior managing director in charge of the San Francisco region for Bear, Stearns & Co., Inc. and head of the Bear Stearn's Los Angeles regional corporate finance department. He has worked on numerous committees with the National Association of Securities Dealers (NASD) and served on the Board of Governors of the Financial Industry Regulatory Authority. Earlier in his career, Mr. Muh worked as a management consultant for McKinsey & Company in New York.

Involved in the Napa Valley community, Mr. Muh and his wife Berit are frequent participants in events at the CIA's Copia and Greystone locations. In addition to his commitment to The Culinary Institute of America, Mr. Muh was vice chairman of the board of the Napa Valley Opera House and an early investor in Oxbow Public Market, adjacent to The CIA at Copia.

Robert Muh earned his bachelor's degree from the Massachusetts Institute of Technology, where he serves as a Life Trustee Emeritus, and his MBA and Master of Philosophy degrees from the Columbia University School of Business. He is currently an adjunct professor at the University of San Francisco Law School and a former adjunct assistant professor of finance at Columbia University.

"I am deeply honored to become chairman of The Culinary Institute of America," said Mr. Muh, who joined the Board of Trustees of the college in 2008 and served as vice chairman for the past two years. "For almost 75 years, the college has been preparing tens of thousands of men and women to become foodservice and hospitality leaders, distinguishing itself as the most respected culinary college in the world. I am proud to be associated with the CIA."

The CIA Board of Trustees consists of 25 highly respected leaders in the foodservice industry and business world. They provide expert governance and guidance for the not-for-profit college and are not compensated for their services.