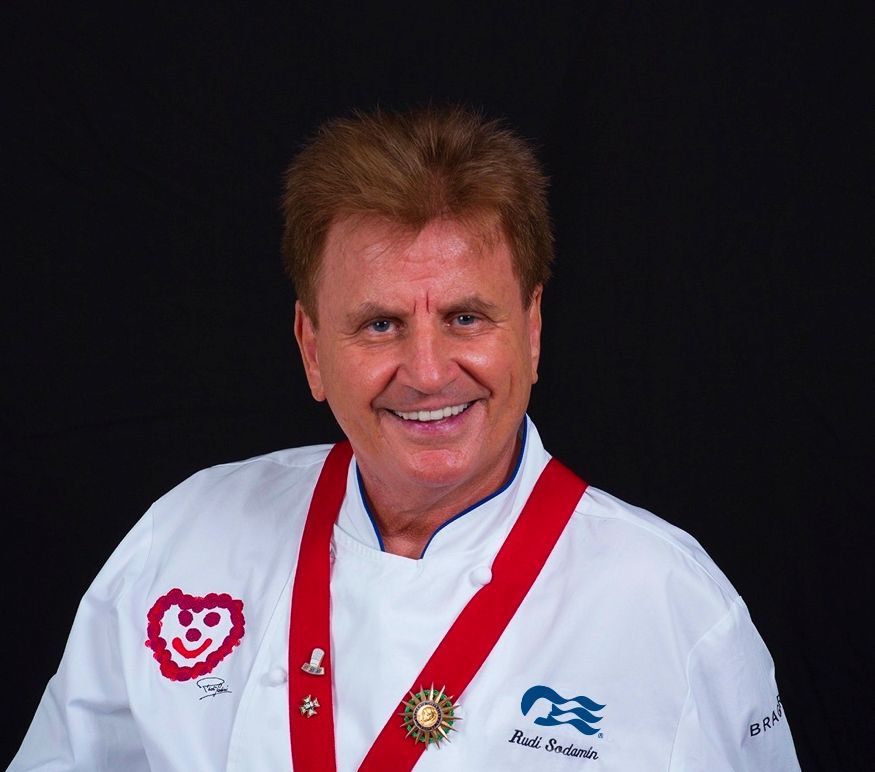 Sodamin is currently the master chef for Holland America Line, a position he will retain as he takes on his new role as head of culinary arts for Princess.

“Princess is already well-known for its strong culinary culture. We are bringing in Chef Rudi to build the kind of excitement and dining experiences that will impress our guests. He is the perfect person to bring an entirely new level of excellence and innovation to our culinary product, environmental dining experience, and service delivery.”

Throughout his career, Sodamin has been the driving force behind revolutionizing culinary practices and elevating the perception of fine dining in the cruise industry. An internationally-respected food authority, Sodamin is the most highly-decorated chef working on the world’s oceans and is widely considered one of the most innovative, energetic, and influential chefs in the hospitality industry. Among his most recent accomplishments has been the highly successful launch of Rudi’s Sel de Mer restaurant onboard three Holland America Line’s ships. Carnival Cruise Line was so impressed by the restaurant concept, leadership commissioned Sodamin to create Rudi’s Seagrill for its new Excel class ship Mardi Gras, which had its inaugural cruise in August 2021.

Sodamin began his career at the age of 14 with a kitchen apprenticeship in Kurhotel Heilbrunn in Bad Mitterndorf, Austria. By 23, Sodamin was appointed Chef de Cuisine on the luxury line Vistafjord with Norwegian American Cruise Line—he was the youngest chef in the cruise line world to have responsibility on that scale. By 26, he was named corporate executive chef onboard the legendary Queen Elizabeth 2 (QE2)—again, the youngest chef at sea to attain such a title.

Under his stewardship in the 1990s, the food served by the historic Cunard Line was widely acclaimed as the best in the world. After a dozen years at Cunard Line as vice president of food and beverage and corporate executive chef, Sodamin joined Royal Caribbean Cruise Line as director of corporate food and beverage operations and culinary spokesperson. During his tenure, he built an international culinary team from across 50 nations and launched the brand’s first test kitchen. Sodamin has continued his impactful tradition of innovation with Holland America Line, instituting the line’s first Culinary Council (of which he is Chairman) as well as spearheading the Holland America Line Culinary Art Center.

Additionally, Sodamin championed professional development of all Holland America Line culinary staff and led the development and launch of a residential Culinary Training Center in Manilla, the Philippines, working with the Culinary Institute of America to develop curriculum.

“I see food as the way to our guests’ hearts, and the individuals on the Princess Cruise culinary team bring great heart to what they do and take tremendous pride in their work,” said Sodamin.

“My goal is to grow that pride and lead the culinary workforce to new performance heights through innovative approaches to teamwork and creativity, collaboratively creating new signature interactive dining experiences, and motivating this talented team to new levels of culinary artistry.”

“A food experience is about human passion, energy, excitement, and expertise all channeled together to create an emotional, multisensory experience with a true human connection,” said Padgett.

“Chef Rudi is one of the few who truly understands this and how to consistently create culinary magic for guests, and we are fortunate to be able to tap his extensive know-how and leadership to further elevate the Princess on-board dining experience and inspire our culinary teammates throughout the fleet.”

Sodamin’s many accolades include a rating of 17 (out of 20) and Three Toques from the prestigious Gault-Millau Guide (1998)—the first for an onboard restaurant and the only such award presented at sea. Sodamin has also authored 14 cookbooks, the most recent of which isRudi’s Sel de Mer: For the Love of Seafood (2021).