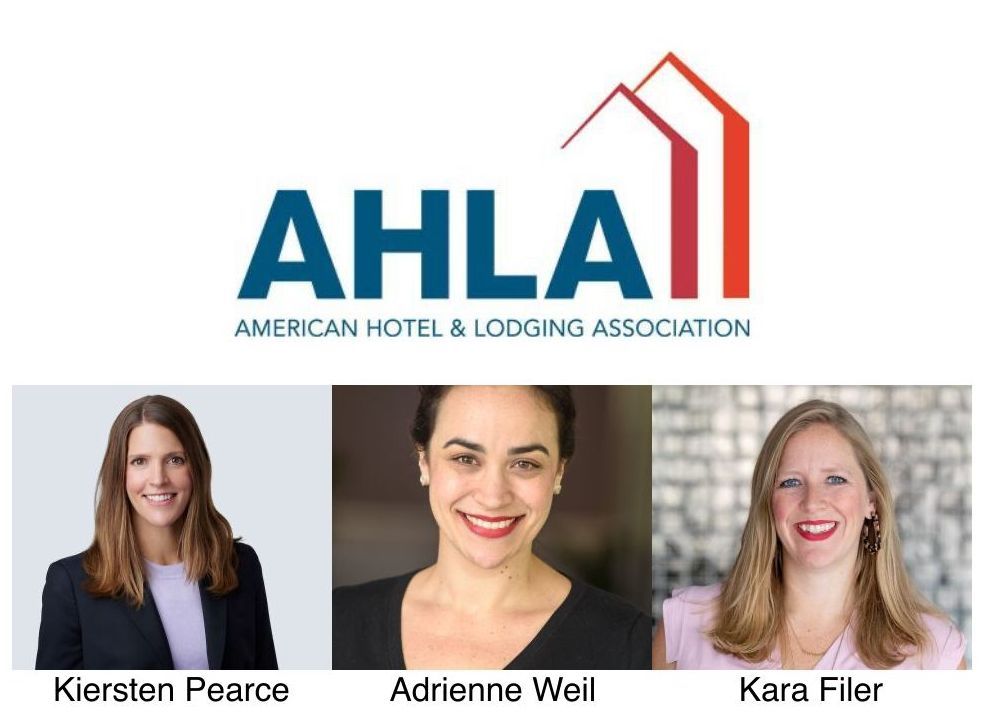 Kiersten Pearce was promoted to Senior Vice President, Executive & Strategic Initiatives. In her new role, Pearce will shape and develop key industry initiatives and ensure alignment and execution on AHLA’s strategic plan and organizational priorities. She’ll also oversee the coordination of the AHLA Board of Directors, Executive Committee and associated committees, and key operational functions, including legal. Kiersten joined AHLA in 2018 and previously served as AHLA’s Vice President of Member Engagement & Services, where she played an instrumental role in growing AHLA’s membership to record levels and realizing consistently strong satisfaction levels.

Kara Filer was promoted to Senior Vice President, Strategic Partnerships and Business Development. In her new role, Filer will optimize and expand sponsorship and event revenues from AHLA Allied member companies, aligning sales and relationship strategies between AHLA and the American Hotel & Lodging Foundation (AHLAF), where she will remain a key member of the leadership team and continue to drive the Foundation’s fundraising efforts. She previously served as AHLAF’s Vice President of Donor Relations and Development and orchestrated initiatives to accelerate overall revenue growth by introducing new events, engaging hotels and vendors and securing grants.

The promotions announced today are part of a steadily growing AHLA team that has played an increasingly critical role on behalf of the hotel industry, especially since the COVID-19 pandemic. In the last two years, AHLA has grown from 44 to 65 employees, as the organization continues to serve as the singular voice of America’s hotels and remains deeply engaged in policy issues affecting hoteliers at all levels of government.

“Kiersten, Adrienne and Kara have been instrumental to AHLA’s success over the last several years, and in their new roles they are even better situated to deliver ROI for our growing roster of members and keep the hotel industry moving forward.”