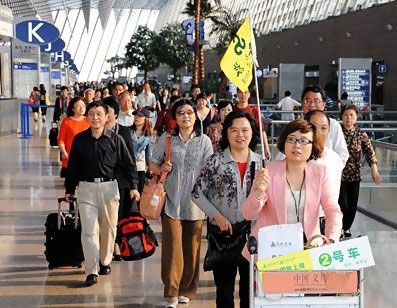 The number of international tourists (overnight visitors) reached 1,138 million in 2014, 51 million more than in 2013. With an increase of 4.7%, this is the fifth consecutive year of above average growth since the 2009 economic crisis.

“Over the past years, tourism has proven to be a surprisingly strong and resilient economic activity and a fundamental contributor to the economic recovery by generating billions of dollars in exports and creating millions of jobs. This has been true for destinations all around the world, but particularly for Europe, as the region struggles to consolidate its way out of one of the worst economic periods in its history,” said UNWTO Secretary-General, Taleb Rifai, opening the Spain Global Tourism Forum in Madrid. 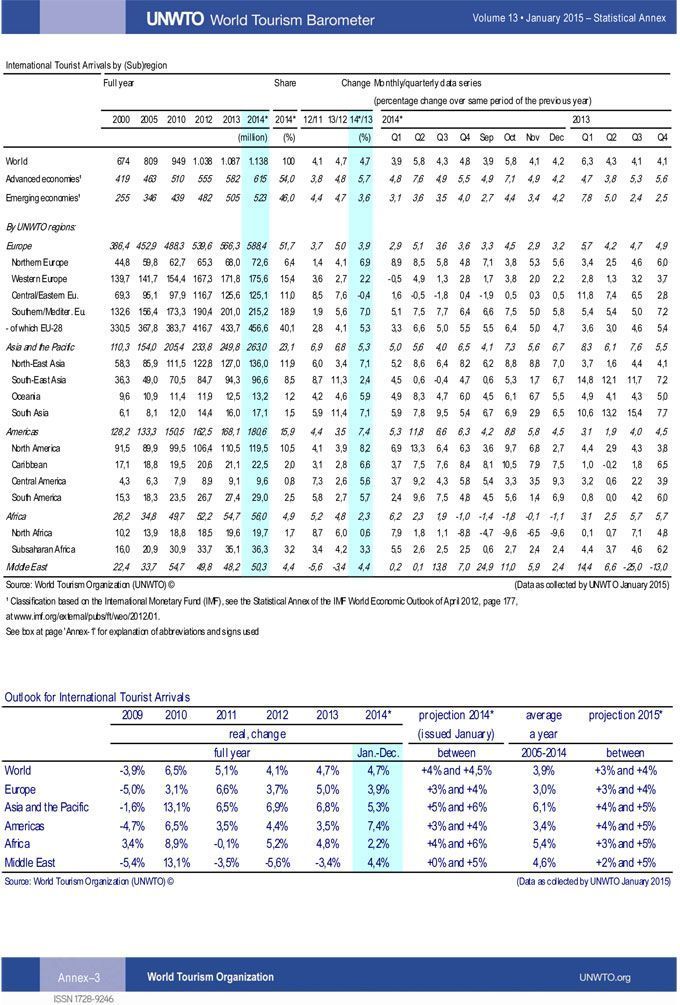 By region, the Americas (+7%) and Asia and the Pacific (+5%) registered the strongest growth, while Europe (+4%), the Middle East (+4%) and Africa (+2%) grew at a slightly more modest pace. By subregion, North America (+8%) saw the best results, followed by North-East Asia, South Asia, Southern and Mediterranean Europe, Northern Europe and the Caribbean, all increasing by 7%.

“We expect demand to continue growing in 2015 as the global economic situation improves even though there are still plenty of challenges ahead. On the positive side, oil prices have declined to a level not seen since 2009. This will lower transport costs and boost economic growth by lifting purchasing power and private demand in oil importing economies. Yet, it could also negatively impact some of the oil exporting countries which have emerged as strong tourism source markets,” added Mr Rifai.

The positive outlook for 2015 is confirmed by the UNWTO Confidence Index. According to the 300 tourism experts consulted worldwide for the Index, tourism performance is expected to improve in 2015, though expectations are less upbeat than a year ago.

Europe (+4%), the most visited region with over half of the world’s international tourists, saw an increase of 22 million arrivals in 2014, reaching a total of 588 million. Thanks to these results, tourism has been a major contributor to the European economic recovery. Northern Europe and Southern and Mediterranean Europe led growth (both +7%), while results were more modest in Western Europe (+2%). Arrivals in Central and Eastern Europe (0%) stagnated after three years of strong growth.

International tourist arrivals in Asia and the Pacific (+5%) increased by 13 million to 263 million. The best performance was recorded in North-East Asia and South Asia (both +7%). Arrivals in Oceania grew by 6%, while growth slowed down in South-East Asia (+2%) as compared to previous years.

The Americas was the best performing region in relative terms with growth of 7%, welcoming an additional 13 million international tourists and raising the total to 181 million. Growth was driven by North America (+8%), where Mexico posted a double-digit increase, and the Caribbean (+7%). Arrivals to Central America and South America (both +6%) grew at double the rate recorded in 2013 and well above the world average.

International tourism in the Middle East (+4%) shows signs of rebound with good results in most destinations. The region attracted an additional 2 million arrivals, bringing the total to 50 million. Africa’s international tourist numbers grew by an estimated 2%, equivalent to an increase of one million arrivals. The region reached 56 million tourists. While arrivals to North Africa were weak (+1%), Sub-Saharan Africa saw international tourist numbers rise by 3% despite the Ebola Virus Disease outbreak in a few West African countries. Data for Africa and the Middle East should be read with caution as it is based on limited and volatile data.

A pickup in expenditure on international tourism from traditional source markets compensated for the slowdown of the large emerging markets, which had been driving tourism growth in previous years.

Among the other two main emerging markets, the Russian Federation (-6%) clearly lost strength in 2014, while Brazil still grew by 2%, despite the appreciation of the US dollar against the Brazilian real and slower economic growth. Beyond the top ten, some smaller emerging markets saw expenditure grow substantially, with Saudi Arabia, India, the Philippines and Qatar all reporting increases of 30% or over.

A pickup in demand from traditional source markets compensated for the slowdown of the large emerging markets. Expenditure from the United States, the second largest outbound market in the world, grew by 6%. Noteworthy is also the rebound of France (+11%), Italy (+6%) and the United Kingdom (+4%).