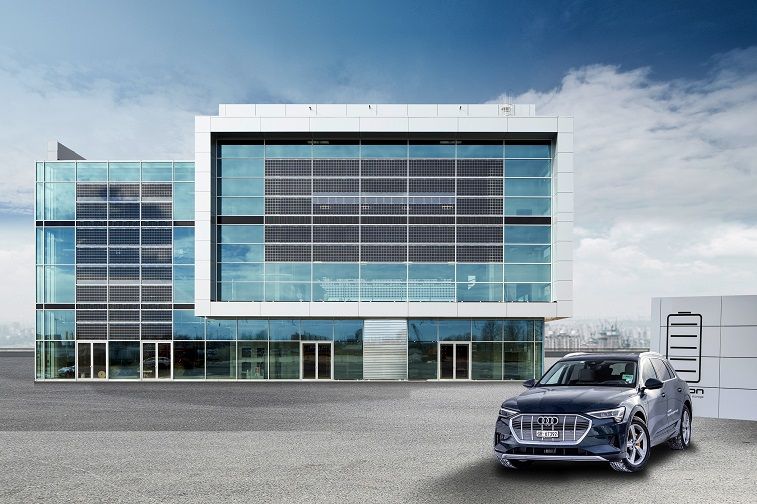 Audi has been showing that economy and ecology do not contradict each other at the new Audi Brand Experience Center at Munich airport.

The 3,580-square-meter Audi Brand Experience Center is a showcase for state-of-the-art energy and building technology. As an international training center for the Audi sales network and an event location, it functions as a role model and multiplier.

“With our clear focus on sustainability, we are stating very clearly that we are approaching this topic holistically and far beyond the electrification of the vehicle fleet,” says Horst Hanschur, head of Retail Business Development and Customer Services. For example, the company intends to make all Audi production locations worldwide CO2-neutral by 2025. Audi intends to achieve CO2-neutrality company-wide by no later than 2050. “We are also working together closely with our trade partners on this journey. The Audi Brand Experience Center serves as a field for experimentation and inspiration at the same time.”

For example, the entire air-conditioning technology in the new training and event center is based on the use of geothermal energy: Pipes that can be used for both heating and cooling are installed in the slabs between the floors of the building. The triple solar protection glazing on the entire facade deflects beams of sunlight, which reduces the cooling load in summer in particular, while ensuring a high level of light transmission at the same time.

The new building is the first sustainably built property at Munich airport. The glass facades of the futuristic-looking center consist of just under 450 square meters of transparent photovoltaic elements with more than 1,650 solar cells that deliver roughly 42,000 kilowatt hours of electricity per year. This corresponds to the annual power consumption of 10 four-person-households. This electricity generated with solar power can be stored temporarily via two battery storage devices that Audi made from second-life batteries. The self-generated electricity is used for the building itself and for charging electric cars. There are a total of six charging points in front of the building, including two 150 kilowatt fast charging points. These charging terminals have been added to the 78 charging points of AUDI AG’s electric charging park at Munich airport, making it one of the largest contiguous charging parks in all of Europe.

As a special eye-catcher, Audi installed the walk-on meteorite at the charging terminals in front of the Brand Experience Center, which had “landed” on the airport grounds for the market launch of the Audi e-tron. Here, Audi is experimenting with facade material that binds carbon dioxide permanently and is being tested for use in dealerships.

As an electric filling station, the meteorite is also an important element of the “Charge and Fly” campaign. Until December 20, 2019, people who own an electric car or plug-in hybrid can park their car of any brand free of charge here and have it fully charged while they are traveling by airplane. The Audi e-tron meteorite will remain available as a public charging station even after the end of the promotion period.

The brand with the four rings has been expanding the Audi Campus at Munich airport continuously since 1998: Aside from the Audi Brand Experience Center, the company is represented with the myAudi sphere, the Audi Conference Center, and three other Audi training centers.