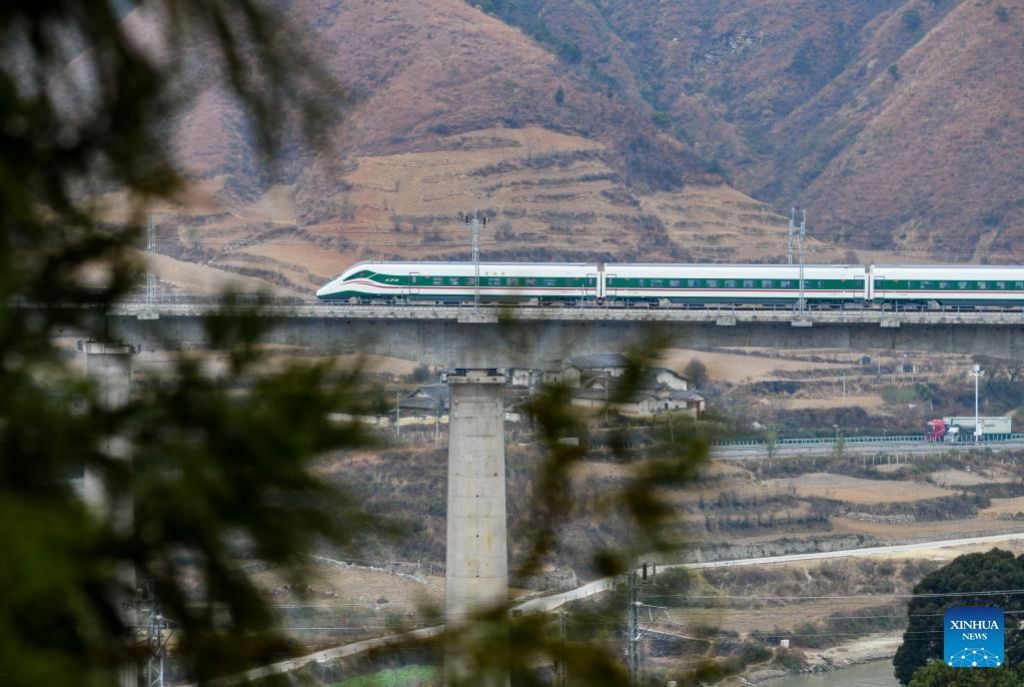 At this point, the new 915-kilometer-long Chengdu-Kunming Railway has been put into operation.

The New Chengdu-Kunming Railway is constructed under the auspices of China Railway Chengdu Bureau Group Co., Ltd. with 30 new stations and 18 altered stations. Railroad departments along the line are fully cooperating with the opening operation and running passenger trains and cargo trains. Later, according to the operation and market demand, the train operation plan will be continuously optimized. Meanwhile, the optimized and upgraded CR200J power-concentrated locomotive set will be put into operation in the new Chengdu-Kunming Railway.

"Welcome to the train, Cimogeni (good luck)!" Next to the brand-new train, wearing a Yi pleated skirt, 29-year-old Yi conductor Ayi Buka led the train crew to say blessings to the passengers. She comes from Ganluo County, Liangshan Yi Autonomous Prefecture, Sichuan Province, once an extremely impoverished area. "My home is right next to Ganluo Railway Station. It used to take five hours to get home from Chengdu, but now it only takes two hours and there are more trains," Ayi Buka said with a smile. Including the large and small Liang Shan, the Sichuan-Yunnan junction of the Hengduan Mountains, high mountains and deep valleys, geological structure is extremely complex, known as the "geological museum", once asserted by foreign experts as "railroad forbidden area".

"The new Chengdu-Kunming Railway is connected to the Chengdu railroad hub with the China-European train Chengyu in the north, and to the Sino-Lao railroad through the Kunming railroad hub in the south."

Tang Jiqiang, professor of Southwest University of Finance and Economics, said that the full line of the new Chengdu-Kunming Railway will strongly promote the great connection between China's southwest region, including the twin-city economic circle in the Chengdu-Chongqing region, and the international corridor, and help open up the country at a high level.

As a transportation artery connecting Chengdu, Xichang and Kunming, the new Chengdu-Kunming Railway is a key project for the development of the western part of the country and an important channel connecting South Asia and Southeast Asia in the construction of "The Belt and Road", which has an important role in promoting the economic quality development of the areas along the route.