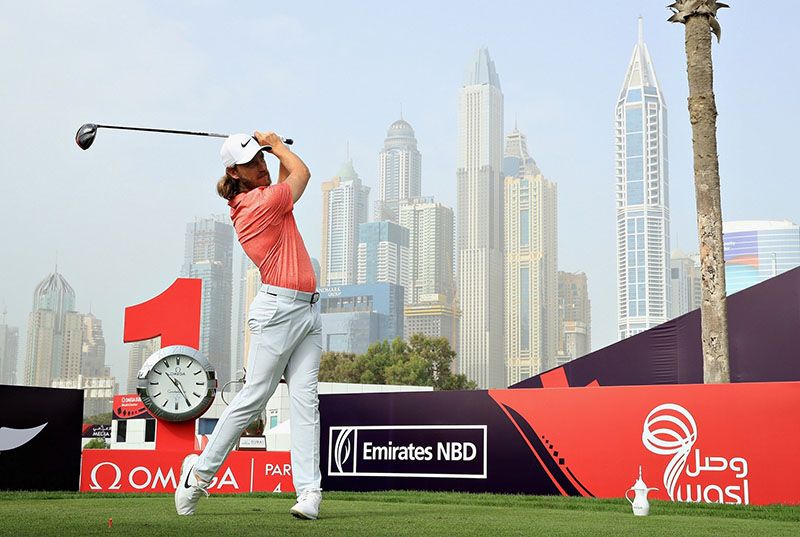 Tommy Fleetwood is the latest star name to announce his return to the Omega Dubai Desert Classic where he will be joined by Major champions Sergio Garcia, Louis Oosthuizen and Danny Willett at Emirates Golf Club from 23-26 January.

Fleetwood will arrive in Dubai looking to improve on a tie for sixth last year and, potentially, follow in the footsteps of Willett (2016) and Garcia (2017) who, just a few months on from their respective victories over the Majlis Course, went on to claim maiden Major titles at The Masters.

No stranger to success in Dubai, Fleetwood was crowned European Tour Number One at the final event of the 2017 season – the DP World Tour Championship, Dubai at Jumeirah Golf Estates. He will therefore be one of the favourites to lift the iconic Dallah Trophy when the world-class field assembles next year.

“I am delighted to be playing in the 2020 Omega Dubai Desert Classic,” said Fleetwood, currently ranked 15th on the Official World Golf Ranking. “I love playing in Dubai and this event is among my favourite weeks of the year. We always get looked after so well and the whole week is a fantastic experience. I hope in 2020 I can add my name to the amazing calibre of previous champions.”

Fleetwood will be joined by compatriot Willett, hot off a resurgence that has seen the Englishman claim two of the European Tour’s biggest titles over the past 12 months. Not only did he take top spot at the DP World Tour Championship last year to announce a dramatic return to form, he has since gone on to claim a dominant BMW PGA Championship victory at Wentworth Club in the UK last month.

Having so impressively re-established himself as one of the most talented players in the game, Willett will no doubt arrive in confident mood when he tees it up in Dubai looking for a third career title in the city.

“My victory at this event has a very special place in my heart,” said the 32-year-old Willett. “Not only was it a fantastic springboard to what followed at Augusta a few months later, it was a title I had always wanted to win. Having watched so many star names do battle over the past 30 years, it was an honour to add my name to a list of such iconic champions. I can’t wait to get back to Emirates Golf Club in search of a second title.”

Willett will be joined by 16-time European Tour winner Sergio Garcia, who succeeded the Englishman as both Omega Dubai Desert Classic and Masters Tournament champion two years ago. The Spaniard fired four rounds in the 60s en route to a three-shot victory over Sweden’s Henrik Stenson two years ago, using it as a springboard to Major success.

Louis Oosthuizen rounds out the latest four players to commit to teeing it up next January at Emirates Golf Club, as the 2010 Open Champion looks for a 10th European Tour title and his first in Dubai. South African golfers have a rich pedigree in the Omega Dubai Desert Classic, with four victories – three of which were claimed by Ernie Els, the other by Wayne Westner – and it would not be a surprise if Oosthuizen were to add his name to that list.

With the four-day event set to be bigger and better than ever, offering an enhanced hospitality experience, contemporary food and beverage offers and a rejuvenated kids’ zone, in addition to a truly world-class field, this is the perfect time to book a daily or season ticket with prices starting from AED75.

The inaugural Omega Dubai Desert Classic was played in 1989 and won by England’s Mark James. Since then, the roll of honour has boasted some of the biggest names in golf over the past 30 years, including the likes of Seve Ballesteros, Fred Couples, Rory McIlroy, Colin Montgomerie and Tiger Woods.