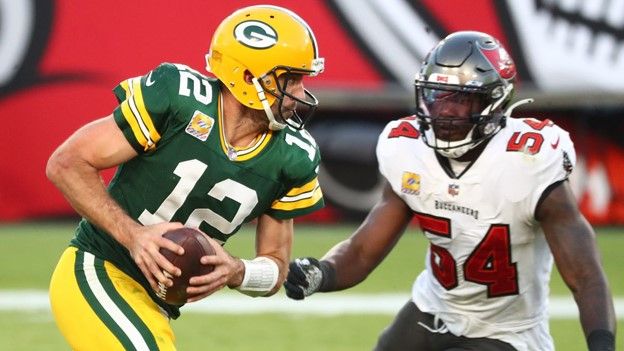 We are down to just four NFL teams vying for a slot in Super Bowl LV in Tampa Bay, Florida.

The Tampa Bay Buccaneers will face the NFC’s No. 1 seed, Green Bay Packers, for a chance to become the first team in history to play in the Super Bowl on their home turf. Over in the AFC, the No. 1 seed Kansas City Chiefs will host the No. 5 seed, Buffalo Bills, who are looking for their first Super Bowl appearance since the Jim Kelly and Don Beebe era.

Technology Put to Use in Green Bay

The Green Bay Packers are three-point favorites over the Tampa Bay Buccaneers at most online betting sites. Normally, home-field advantage is a significant factor in NFL football, but the new normal is anything but normal. We haven’t seen the same type of return on home-field investment as we have in previous seasons. There just hasn’t been much ‘home team audience energy’. In Green Bay, Lambeau Field will only be at ten percent capacity. During a regular game – one not taking place in 2020 or the beginning of 2021–there would be 80,000 plus screaming fans making it hard on the visiting team. However, in this season’s NFC Championship Game, only 8,000 fans are expected.

The ticket sales for the NFC Championship showdown were digital-only. So, there are no reselling or ticket transfers. He or she who bought the tickets are those who must attend.

Another aspect of technology impacting this matchup is the betting markets. Sportsbooks are now basically run like corporations. They expect perpetual gains and absolutely frown on taking any sort of loss. So, top sportsbooks have implemented algorithms, machine learning, and even AI to build models and predict game outcomes. This has never been more apparent than the betting line set for the NFC matchup between Tom Brady and the Tampa Bay Buccaneers and Aaron Rodgers and the Green Bay Packers. I have poured over the stats multiple times and handicapped this game and cannot find a chink in the point spread’s armor.

The line opened with a spread of three-and-a-half points but has since moved down to just three. When they adjusted the line down, they adjusted the juice on the Green Bay side up to -125 at most outlets. The difference between a winning bettor and a losing one is when they bet. A winning realizes that they are in a war of attrition against the sportsbooks and all of their data processing machines and are loath to pay more than the normal -110 vig for any spread or total bet. They also don’t bet with their heart. They realize that it isn’t a wager for one team or the other or a wager against a particular side when betting the point spread. They understand that it’s them against the betting line set by the bookmakers. With that in mind, a knowledgeable, winning sports investor won’t lay any bet where they don’t see a clear advantage against said lines.

In the case of Tampa Bay vs. Green Bay, I have yet to find any clear advantage. The bookmakers have pulled out all the stops and set what looks to be a perfect line that could easily go either way. After all, their job is to use all of the technology at their disposal along to set a line that attracts an equal amount of money to each side. That way, they win no matter what. Gone are the days when human line setters and sportsbooks would take a stance on a game.

With technology’s help, we are left with a super sharp opening line. So, now it becomes a waiting game. It’s out of the machines’ proverbial hands that helped to set these lines, and we must wait for artificial change to soften the lines up a bit.

This means we need to wait to see if massive amounts of money go to one side or the other, which will cause the sportsbooks to adjust their line to keep equal action. For example, if a lot of money starts coming in on the Buccaneers because they are available at positive money, then we could see the juice reduced on the Packers -3 line, which would open up a little more value. If enough money came in on Tampa Bay to move the line down to -2.5, it would create an artificially soft line with a lot of value. Another thing that could open up value are uncontrollable aspects, like if it suddenly started pouring snow in Green Bay, or key players on one side or the other missing the game due to injury or COVID.

We’ll have to wait and see.