Football for Gender Equality in Africa 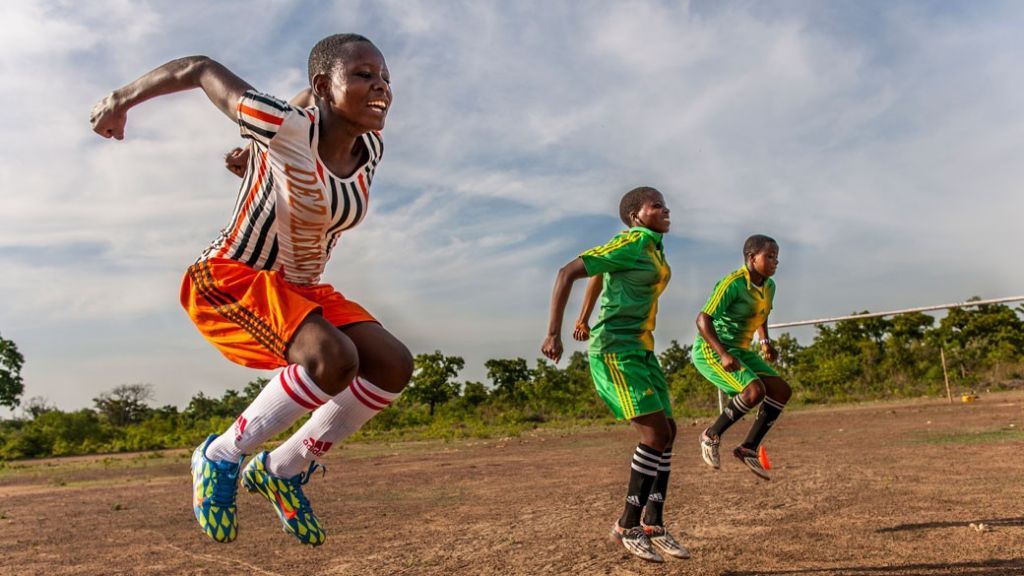 FIFA, the French Development Agency (AFD) and the NGO Plan International France are joining forces to launch the Championnes programme in Togo, Guinea and Benin. The goal? To empower girls and promote gender equality through football.

To empower women and girls and fight against the discriminatory practices and attitudes that they face, FIFA and the AFD are financing the Championnes programme, which is being run by the NGO Plan International France.

Its objective is to promote leadership among girls and promote gender equality through football in a safe environment, namely at school.

The various projects under the Championnes programme are being developed in Benin, Togo and Guinea. The expected outcomes include capacity-building and bolstering confidence in 5,390 girls by giving them the chance to work together towards a common goal. The girls and women, aged between 12 and 24, will be given the opportunity to play football in refurbished facilities that are properly equipped, enabling both genders to share the space harmoniously. Leaders from 180 community organisations will also receive support as part of the programme.

On 23 March, Plan International France, together with Plan International Benin, Guinea and Togo, will bring together all the local stakeholders to officially launch the programme. The Guinean, Togolese and Beninese football associations will be invited to participate, enabling them to share experiences and skills and create synergies with existing activities.

“Every day, football around the world shows us that it brings people together, motivates regardless of age and promotes team spirit. FIFA wishes to use the power of football to drive social change and address some of the greatest challenges we are currently facing at global level in order to tangibly contribute to the United Nations Sustainable Development Goals,” said Véron Mosengo-Omba, FIFA Chief Member Associations Officer.

“The partnership between FIFA, the AFD and Plan International will allow the three organisations to combine their know-how and respective strengths to promote the role of women in society and reduce inequalities,” he added.

The Championnes programme comes under the umbrella of FIFA’s strategy for the promotion of women’s football, which has been in place since October 2018. The potential for personal empowerment and development through football did not go unnoticed by the AFD. Both FIFA and the AFD share the conviction that sport can and should be a vector in sustainable development, social cohesion and equality in Africa.

Matthieu Discour, AFD Regional Director in the Gulf of Guinea said, “Football is an inspiring universal language that unites and unifies. It is capable of transcending borders, cultures, beliefs and physical differences. The pitch becomes a space where everyone can be free, excel, share and connect. In addition to the remarkable and unprecedented nature of this partnership, the Championnes programme is fully aligned with the ADF’s strategic focus in terms of gender equality and social cohesion.”

This ambitious project is also fully in line with Plan International France’s mission to promote the rights of the child, especially of girls, and gender equality through education. Plan International France Director Yvan Savy notes that “by playing football, girls in the Championnes programme are going to change the way their skills, ability and roles are perceived. They will become the role models, the champions of change, capable of making their own decisions and contributing to reducing harmful practices that are still preventing their communities from developing. ”

In West Africa, 30% of girls between 15 and 19 are married, divorced or widowed. More specifically, in Benin, child marriage affects 30% of girls, in Guinea 54% and in Togo 32%. The consequences are dramatic: 29% of girls in Guinea are not enrolled in school and more than 3,000 pregnancies were recorded in school settings in Togo in 2017.

Moreover, discriminatory practices against and attitudes towards women and girls continue to exist. In many communities, social norms dictate that girls should become mothers, which is considered to be incompatible with education. Child marriage, sexual violence, female genital mutilation and early childbearing, in addition to unequal access to land and financial services, constitute significant obstacles to the economic and social empowerment of women.

Against this backdrop, the Championnes programme can clearly contribute to changing mentalities.