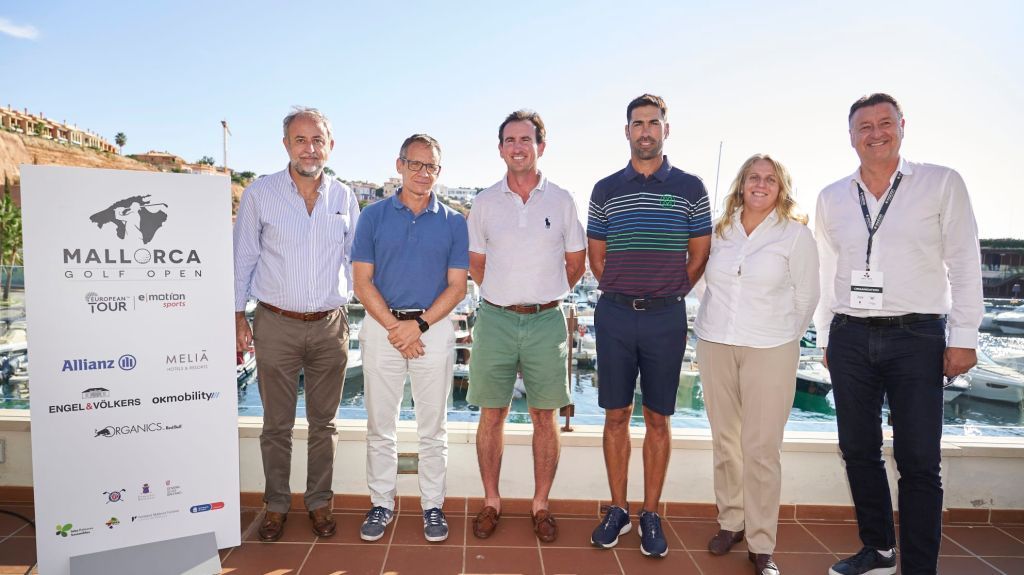 Álvaro Quirós and Gonzalo Fernández-Castaño joined Edwin Weindorfer CEO of E|motion, promoter of the Mallorca Golf Open, to officially launch the event, which sees the European Tour return to the island for the first time in ten years.

Fernández-Castaño and Quirós have 14 European Tour victories between them and come into the event full of enthusiasm to be playing on Spanish soil once again.

The Mallorca Golf Open is a professional golf tournament due to be held 21–24 October 2021 at Golf Santa Ponsa in Mallorca, Spain.

"It is always special to play on home soil, and even more so in such a wonderful place as Mallorca. Although I have not usually been very good at playing tournaments in Spain, it is curious that one of my best performances was precisely on this island, in a Mallorca Classic in which I came out as leader on Sunday," said Fernández-Castaño.

Quiros knows what it means to win a tournament in front of home crowds, triumphing at the Spanish Open in 2010, and would love to repeat that feeling this week.

"Without a doubt, winning in Spain is more special than anywhere else, and more so if you do it in the circumstances that I did, being my first Spanish win on Tour, with my mother present there, and to top it off it was Mother's Day. It went well. If that made me excited, I think a win this week, considering how tight I am with respect to keeping the card for next season, would be just as celebrated or more."

Both have had the opportunity to get a feel for the Golf Santa Ponsa 1 course, designed by Falco Nardi, before the action starts this week.

"I came to this club about 20 years ago to play a Puerta de Hierro Cup, but it was played on course 2, so I came here without any knowledge of the course. I thought it was a good course, very well prepared, especially if we think of the short time they had, and with an 18th hole that I thought was fantastic. The wind always blows here, and it is something we will have to keep in mind, because there are holes that just the thought of having it against us is frightening", said Fernández-Castaño.

Quirós continues to be one of the longest hitters in Europe, and he came close to recording an eagle on the par five 10th hole, which measures almost 600 meters, during a practice round.

"Today we played tailwind, but I don't want to imagine it downwind, because it can get really long. In addition, for the tournament there are two holes that have been converted from par 5 to par 4, and that adds a lot of tension in certain shots. It won't be an easy test, but it's going to be fun, because the course offers a lot of alternatives”, he said.

The Mallorca Golf Open brings to a close a swing of three consecutive tournaments on Spanish soil, and a total of six across the 2021 Race to Dubai, which Quiros says is a welcome return.

"Having been on the circuit for so many years means that I have been able to experience the good times of having up to seven tournaments in Spain, and also the bad years when they all disappeared, so it is a luxury to be able to see how everything is recovering step by step, because for us it is fantastic. Being from the south, I run away from the cold, and these tournaments give me life, and I think I speak for the vast majority of Spaniards".

Friends for many years, both players are delighted to be the face of a tournament like the Mallorca Golf Open, where - after Major winner Martin Kaymer - they are the two players with the most victories in the 120 player field, and a win here would add to their friendly rivalry.

"Of course, it is exciting to continue playing a leading role, at least in the home tournaments, and even more so if it is with a friend like Álvaro. We continue to maintain this rivalry, which has been going on for a few years now, to see who gets to eight victories first," said Fernández-Castaño

Edwin Weindorfer, CEO of E|motion, promoter of the tournament, said that this will be an important week for a tournament that was added to the schedule at short notice, following the cancellation of the Trophee Hassan II.

"This tournament was a goal for a long time, we have the WTA and ATP tennis tournaments, but we have had our eye on golf for years, and finally it is a reality. As is already known, the idea was to start in 2022, but this possibility arose, and together with the enormous effort of the Santa Ponça course and the whole team, we have managed to pull it off.

“We value the work of sponsors such as Isla de Mallorca, Balearic Government, Consell de Turismo, Meliá Hotel, OK Mobility, Allianz, Engel&Volkers, Perlentaucher, Red Bull/Organics and Kaze. Without them, none of this would be possible".