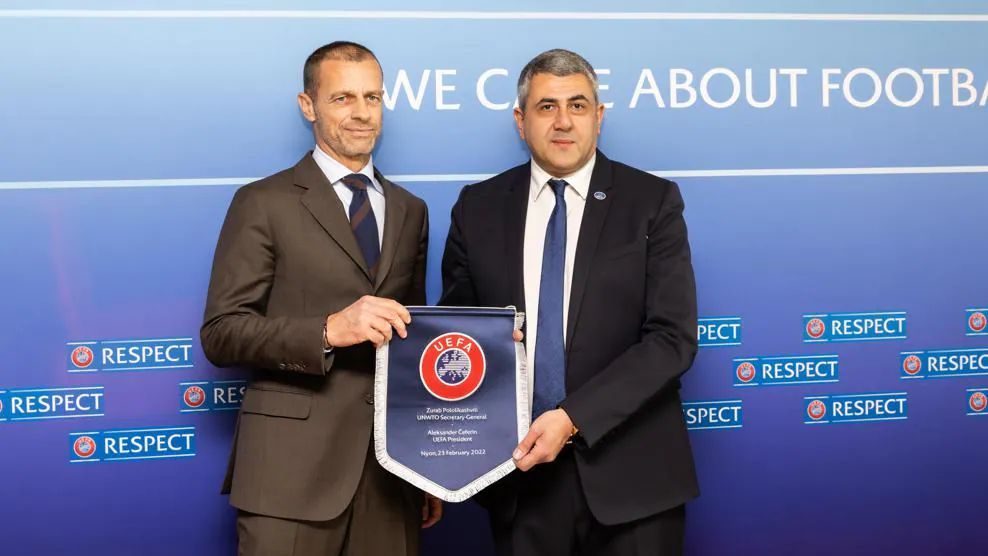 The Union of European Football Associations (UEFA) and the World Tourism Organization (UNWTO) today announced their partnership around shared values and a common vision for the future.

The leaders of both organisations met today at UEFA’s headquarters in Nyon, Switzerland, to agree to jointly promote the benefits of sport and sports tourism for development and opportunity for all, including young people. UNWTO Secretary-General Zurab Pololikashvili and UEFA President Aleksander Čeferin recognised the values shared by tourism and football, both people-led sectors with the capacity to promote understanding, friendship and solidarity and drive social and economic change.

Looking ahead, both UEFA and the UNWTO will work to deliver a lasting legacy across Europe. UEFA will join the UNWTO Global Youth Tourism Summit, designed to give young people a say in the future of the sector and to give them the skills and knowledge needed to lead tourism forward.

UEFA President Aleksander Čeferin said: “Sports tourism is one of the fastest-growing sectors in tourism. And tourism and football, as the world’s most popular sport, uniquely complement each other. Sporting events, such as the UEFA EURO and the UEFA Women’s EURO, are making an exceptional contribution to tourism in the host countries.

“Even more important is that football offers teams and supporters a chance to travel across the continent, discover new destinations and learn more about different cultures. I cannot think of a better way to learn more about each other, grow together rather than drift apart.”

UNWTO Secretary-General Zurab Pololikashvili added: “Tourism and football are natural partners. They bring joy to many millions, but their benefits go far beyond vacations or single matches. Working with UEFA, UNWTO will build on their potential to celebrate our shared humanity, foster friendship across borders and create experiences and opportunities for people everywhere.”

Under the new partnership, UEFA and the UNWTO will work together to grow sports tourism across Europe, including through facilitating travel and mobility and through promoting the opportunities for jobs and education this can bring. The two organisations will also jointly champion sustainability within sports and tourism, in line with the wider United Nations Agenda for Sustainable Development and UEFA Sustainability Strategy 2030.

The cooperation agreement emphasises the far-reaching impact of both tourism and sport, with both touching on almost every part of economies and societies, in Europe and globally. The two sectors are leading employers and champions of youth empowerment and gender equality. Furthermore, under the guidance of UEFA and the UNWTO, both sectors are working hard to meet their climate action responsibilities.