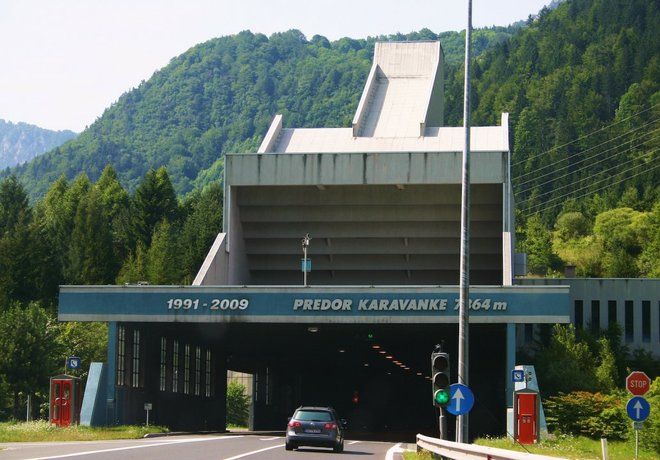 Millions of passengers on the Trans-European Transport Network (TEN-T) will benefit from safer, faster and more convenient road connection between Austria and Slovenia, as the European Investment Bank and Slovenian Družba za avtoceste v Republiki Sloveniji (DARS) agree on a €90 million loan to extent and upgrade safety of the Karavanke tunnel.

Karavanke is a key tunnel link on a motorway between Slovenia and Austria, as well as Central and South-Eastern Europe. The project was developed in cooperation with Austrian motor way operator ASFINAG.

With EIB support, DARS will expand the tunnel with a new tube and renovate the existing tube to comply with European Union's safety regulations for tunnels along the TEN-T corridor. A separate €95m loan from the EIB will provide financing to the motorway operator ASFINAG in Austria to connect the existing highway in Austria to the new, eight kilometres-long tunnel.

The Karavanke tunnel extension is a priority project for Slovenia and the EU alike, as it connects Baltic, Adriatic and Mediterranean core TEN-T corridors.

Paolo Gentiloni, European Commissioner for the Economy, said: ““Fewer accidents, reduced carbon emissions and shorter journeys: these are the benefits to Europeans of the €90 million EU financing to expand the Karavanke Tunnel. This investment will strengthen a strategic section of Europe's transport network, further proof of the EU's commitment to sustainable mobility.”

Lilyana Pavlova, Vice President of the European Investment Bank, said: “The EIB`s support for Karavanke Tunnel expansion and safety improvements continues a long tradition of our investments in transport networks for Europeans. The tunnel will create new business opportunities in this part of the EU, improve road safety and reduce traveling time for millions of people, especially during summer holidays. Today's signature is just the most recent of a series, and it builds on a long-established and successful partnership with DARS”

Tomaž Vidic, CEO of DARS, said: “With today's agreement of 90 million euros, we are closing the financial structure for the eastern tube of the Karavanke tunnel, in order to eliminate the bottleneck in road traffic between Slovenia and Austria. It will significantly improve traffic flow and the safety of this cross-border tunnel, which is also the longest road tunnel in Slovenia. The project is also significant for the development of the comprehensive European road network, and improvement of the direct connection of two corridors of the TEN-T core network. I would like to thank my colleagues who worked on the project, and the European Investment Bank, who recognised the importance of this infrastructure project for Slovenia, and Europe as a whole.”

Once expanded, the Karavanke tunnel  will reduce the likelihood of traffic accidents as well as kilometres-long vehicle queues on both sides of the tunnel, allowing easier movement of goods, services and people along one of Europe`s key transit corridors. The project will also have a positive impact on the environment and reduce carbon dioxide (CO2) and pollutants levels (Nitrogen Oxide - NOx, hydrocarbons and dusts) emitted today by queuing vehicles.

It is the second loan from the EUs bank to DARS to benefit from Investment Plan`s guarantees, following successful introduction of the free-flow tolling system for heavy vehicles.