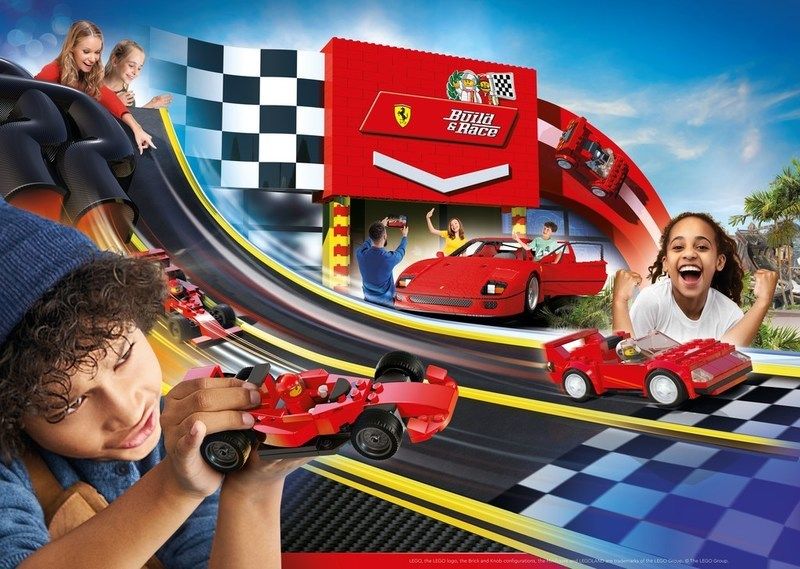 LEGOLAND® Parks and Ferrari announced the world's first LEGO® Ferrari "Build and Race" interactive attraction is coming to LEGOLAND® California Resort in the spring of 2022.

Featuring a life-size Ferrari F40 model developed by the LEGO® Group, Build and Race puts guests in the driver's seat as they make their way through the "garage" to the "racetrack" using their creativity and imagination to build, test and race their own LEGO Ferrari.

Build and Race features three zones designed to be interactive and inspiring.

A LEGO pit crewmember will greet guests as they enter the attraction, sharing Ferrari fun facts, race history, and showcasing themed LEGO race gear and awards. Once inside the garage, guests have the opportunity to sit in a life-size Ferrari F40 model developed by the LEGO Group and have their photo taken.

The journey continues as guests get to tap into their creativity and build their own LEGO Ferrari car to race at one of three racetracks which include the test zone, steering test track and speed test track.

Each track offers guests different obstacles, challenges and a chance to clock in the fastest time.

A DUPLO® build zone offers younger guests the chance to drive their imagination and design their own creation out of bigger bricks as well! LEGO minifigure mechanics and crew members will prompt build inspirations throughout the entire experience.

Finally, once guests have customized their vehicles, raced them through the obstacles and heard the engines roar, they will be able to create a custom digital Ferrari race car. Guests can digitally scan their vehicle and further customize their Ferrari along with their minifigure racing driver. Once complete, the cars are digitally projected on a LEGO racetrack based on Pista di Fiorano (a private racetrack owned by Ferrari mainly for development and testing purposes) and guests can compete with other cars digitally for the fastest race lap!