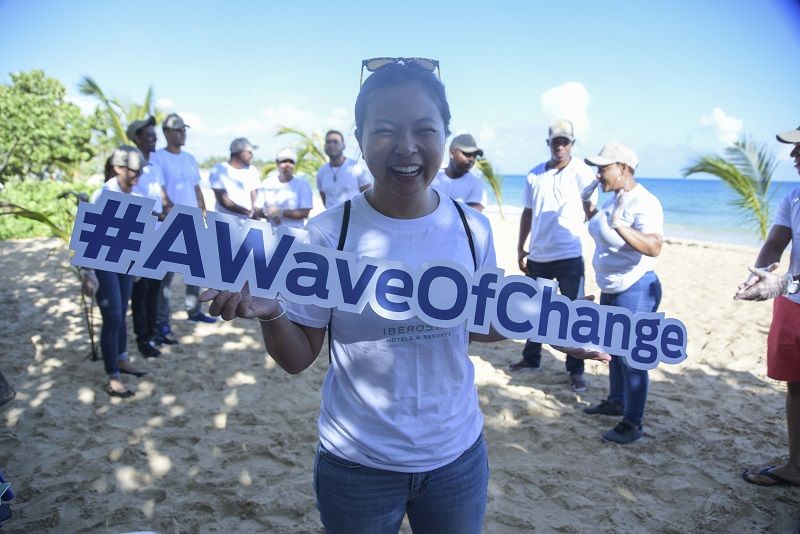 A third of the world’s oceans are now overfished, according to the UN. Hotel businesses, some of whom serve a ton of seafood a day, have a unique opportunity to lead a change in responsible seafood harvesting and consumption.

Iberostar, which hosts 8 million guests a year at its 120 hotels and restaurants in 19 countries, has converted 15% of its total seafood procurement to suppliers certified by partner organizations the Marine Stewardship Council (MSC) and the Aquaculture Stewardship Council (ASC), on the way to a goal of 25%. It now serves about 8,600 kg (almost 19,000 pounds or 86,000 servings) of MSC-ASC-certified seafood a month, globally. Iberostar is also working with the World Wildlife Fund-US and FishWise to improve the sourcing of 100 percent of its seafood.

The MSC and ASC help protect species and environments from overfishing and make sure suppliers continue to comply with the latest laws. Through Iberostar, they’re extending certifications to parts of the world where they’ve never gone before. For National Seafood Month, the company is announcing that 20 of its providers have achieved MSC/ASC certification, along with seven restaurants in five Iberostar hotels in three countries:

The company is also embracing local seasonal regulations—including recently banning 34 species of seafood from its menus in the Dominican Republic.

“As a family business who has become a part of the communities we’ve served for decades, we believe the hotels play a critical role in ensuring the sustainability of the environmental resources of this country for generations to come,” said Gloria Fluxà, the fourth-generation leader in the 63-year-old, 100% family-owned tourism business.

Through its MSC-ASC certified restaurants, Iberostar assures guests they’re supporting fishermen and businesses who share their environmental consciousness, an increasingly important factor in travelers’ choices. When choosing a hotel, 68% of guests in Iberostar’s own study said they considered its sustainability policy as a factor in choosing their hotel. Sustainable Travel International and Mandala Research found that 60 percent of travelers from the U.S. alone took a “sustainable” trip in the three years leading up to the 2016 study. They stayed longer (seven days compared to four for traditional travel), spent more, and brought more benefits to local communities, including job creation and volunteering.

“We see this as one step in a larger commitment,” said Dr. Megan Morikawa, Director of Sustainability for Iberostar. “Getting MSC and ASC Certifications where we operate to allow for the traceability of key seafood products is one step in a larger commitment, where dozens of suppliers, thousands of staff, and millions of clients are guided by best seafood practices and join in this movement with us."

To make sure the commitment spreads throughout the company’s culture, Iberostar is training many of its 32,000 staff members in responsible seafood consumption with the help of FishWise, an ocean conservation organization with more than 15 years of experience working closely with businesses to develop and implement comprehensive seafood sustainability programs.

“The level of commitment and passion within Iberostar to create a transformative business model centered around ocean health is truly inspiring,” said Ashley Greenley, Director of Business Engagement at FishWise. “When it comes to progressive companies, they are the real deal.”

The commitment to sustainably source 25 percent of its seafood from MSC/ASC suppliers and the partnership with FishWise and the WWF are the latest steps in Iberostar’s Wave of Change movement to reduce the use of plastics, promote responsible seafood consumption, and improve coastal health.

“Providing responsible seafood options to our guests goes hand-in-hand with Iberostar’s tradition of gastronomic excellence,” said Dr. Morikawa, part of a team of scientists working on the Wave of Change movement. “We realize that seafood is uniquely complex, and that the potential impact of Wave of Change hinges on empowering our employees to fully understand why we are taking these actions.”

Here are some of the other components of Iberostar’s Wave of Change actions:

For more information on Wave of Change, visit waveofchange.com