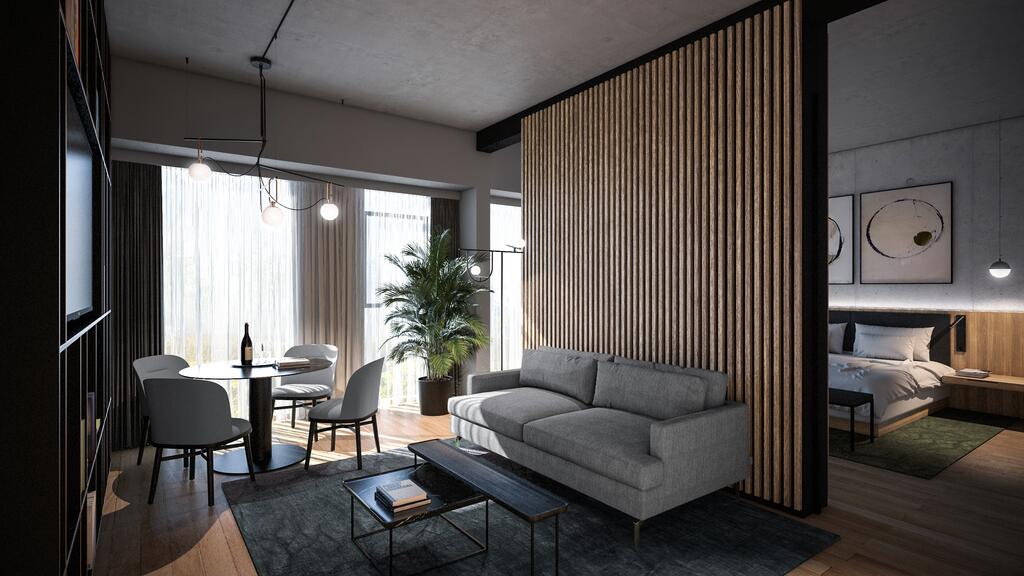 Nobu Hotel Warsaw will open its doors on 3rd August 2020 – Nobu Hospitality group’s first hotel in Poland. This will mark the 12th hotel and 43rd restaurant to open globally for the luxury lifestyle brand.

Nobu Hotel Warsaw is a combination of two wings: the ‘classic’ is housed in an Art Deco building, the former Hotel Rialto, which dates back to 1920s inter-war Poland, and the ‘modern’ is an ultracontemporary, new build – designed through a transformational, cross-continental collaboration: a concerted effort between Polish architectural firm, Medusa Group, and California-based Studio PCH. Respecting the city’s history and resilience, the result tells the story of present-day Warsaw: open, modern and diverse. The rooms span classic to ultramodern, representative of Poland’s rampant revival, allowing guests to choose the style to suit their taste. All exude a sense of calm with Japanese design, and those in the contemporary new wing feature floor-to-ceiling windows with either city or skyline views. All public spaces throughout the hotel house modern Polish art masterpieces from the Jankilevitsch Collection.

Warsaw is ranked as the world’s seventh greatest emerging market, becoming a new Eastern European hotspot for art, design and food and an alternative, cultural city break. The country has also been in the global spotlight recently – thanks to a fast lockdown, Poland was one of the least affected countries in Europe by the global pandemic and Warsaw has been heralded as one of the safest cities to return to this Summer*. Situated on Wilcza Street, the creative hub of the city, and a stone’s throw away from the Old Town, originally built in the 13th century and meticulously reconstructed after the Second World War, Nobu Hotel Warsaw’s neighbourhood welcomes the intellectual traveller to discover its charm as an increasingly popular leisure destination. Etched into the city’s skyline, Nobu Hotel Warsaw is surrounded by a vibrant urban scene full of trendy wine bars that spill out onto the pavements in the summer months, as well as independent shops, art galleries, cafes and restaurants.

Nobu Hotel Warsaw’s flexible 438m² first floor events space provides a stylish setting for large conferences and meetings and can be divided by a mobile wall with acoustic separation, to offer two independent spaces – the Sakura room at 266 m2 and Hikari room at 171 m2.  Crushed glass walls allow plenty of natural light and an independent lobby complete with terrace, allows for total privacy. Further meeting rooms with state-of-the-art facilities exist on the same floor. These can be combined with a variety of bespoke services including planning, catering, business services and technology, including Wi-Fi and audio-visual equipment.

A NEW DAWN OF TRAVEL

Naturally, the health and safety of guests and team members at Nobu Hotels is paramount. The design aesthetic is luxury through simplicity, and Nobu Hotel Warsaw is able to open in a post-pandemic world having meticulously choreographed a flawless stay and dining experience.  Safety and sanitation will continue to be at the forefront, with adjustments to allow for minimal close contact between staff and guests within both the hotel and restaurant. These measures include mobile check-in services to limit interactions and wait time, private elevator access, the option for in-room dining delivered to the door and reduced capacity in the restaurant and café to ensure safe distances between guests.  Rooms and public spaces will be cleaned with UV Light sanitizers after check-out and guests will have access to individual-use gloves and hand sanitizers throughout the hotel, for use at their leisure. All staff will wear masks and gloves as necessary and these will also be available for guests.  To reflect the ever-changing situation across the globe, the hotel’s reservation and cancellation policies remain flexible and risk-free, enabling guests to book with confidence.