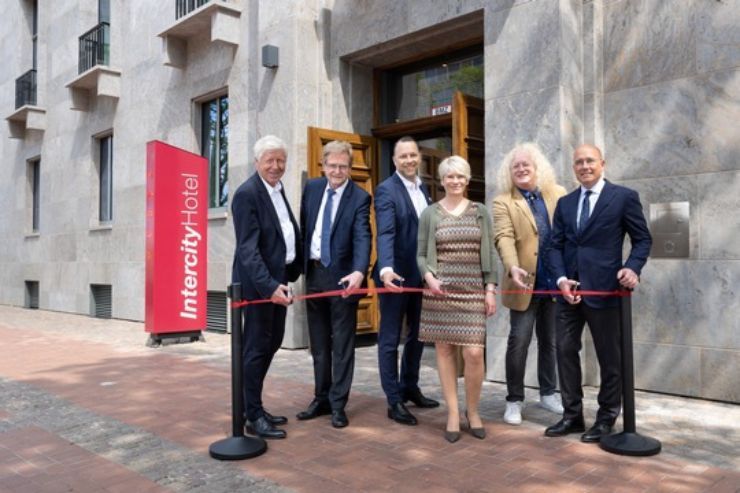 Centrally located between the train station forecourt and the city center, IntercityHotel is the largest hotel in the city, boasting 231 rooms, five conference rooms, a restaurant and bistro lounge with bar and terrace. The gleaming interior of IntercityHotel Dortmund was conceived by Italian architect and designer Matteo Thun. With the FreeCityTicket, which is included with a stay at the hotel, guests can use public transport free of charge and explore the city with all its leisure, cultural and shopping opportunities in a climate-friendly way.

The Hamburg-based B&L Group is in charge of restoration and conversion of the building, which is listed as a national monument, to its new use.

"We are very pleased that the monumental building is now in operation," says City Council Ludger Wilde.

"Throughout its core renovation as an IntercityHotel, the Dortberghaus has retained its classical character and has once again become a real eye-catcher. Its proximity to the main railway station alone makes it a prime address for our city's guests, and the new hotel also upvalues the gateway to the city center from an urban development perspective. Dortmund is a magnet - also thanks to investments like these."

Christian Kaschner, Managing Director of IntercityHotel GmbH, adds: "Dortmund is much more than a pure industrial location; it is also a university city, a service hub, a center of art, culture and sports. So the city is an ideal location for IntercityHotel. We would like to thank the city, but especially our partner the B&L Group, for the usual excellent collaboration in what is now our tenth joint hotel project."

"The conception and execution of the building project under the conditions applying to buildings protected as part of the national heritage was a challenge that we met with passion," says Thorsten Testorp, managing partner of the B&L Group.

"The conversion into a hotel fully leverages the potential of this timeless architectural classic with its a prime location for pedestrians, further enhancing the attractiveness of Dortmund's city center through its renewal."

"I am very much looking forward to finally welcoming the first guests to IntercityHotel Dortmund. All major cultural facilities and shopping opportunities can be found in the immediate vicinity, but there are of course also green islands of tranquility. The FreeCityTicket presented to staying guests offers mobility right down the line: it allows our guests to use all public transport in the city free of charge," adds Petra Bantle, General Manager of IntercityHotel Dortmund.