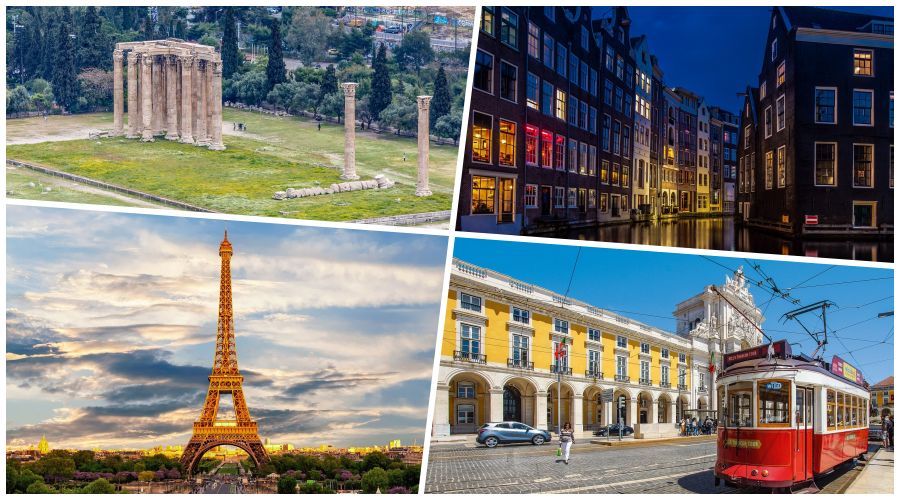 Joint research by the World Travel & Tourism Council (WTTC) and ForwardKeys analyzed flight booking data and revealed the top 10 most popular European cities and compared them with the data in 2019.

In the first half of June last year as the holiday season was in full swing, London was the most heavily booked city in Europe for any date of arrival, followed by Paris and Rome. Flight booking data shows London has fallen to the bottom of the top 10 most booked European cities, as border restrictions and UK  quarantine regulations choked travel.

However, travel restrictions imposed as a result of the COVID-19 pandemic, such as the quarantine rules imposed by the UK government, the capital has slumped to the bottom of the top 10.

While Europe has begun to relax travel restrictions and bookings have begun to pick-up, those for London have languished.

Under pressure from the travel sector, the UK government finally looks set to announce ‘travel corridors’ to popular European summer hotspots such as France, Germany, Greece, Turkey and Italy. This would enable airlines to open flights for bookings to Brits eager to get away during the summer.

Lisbon meanwhile has soared to the top of the list of most-booked European cities during the first half of June, compared to sitting close to the bottom in ninth place in 2019.

Portugal has been one of the first countries to establish enhanced hygiene and safety protocols to welcome tourists and has one of the top testing rates to control transmission. 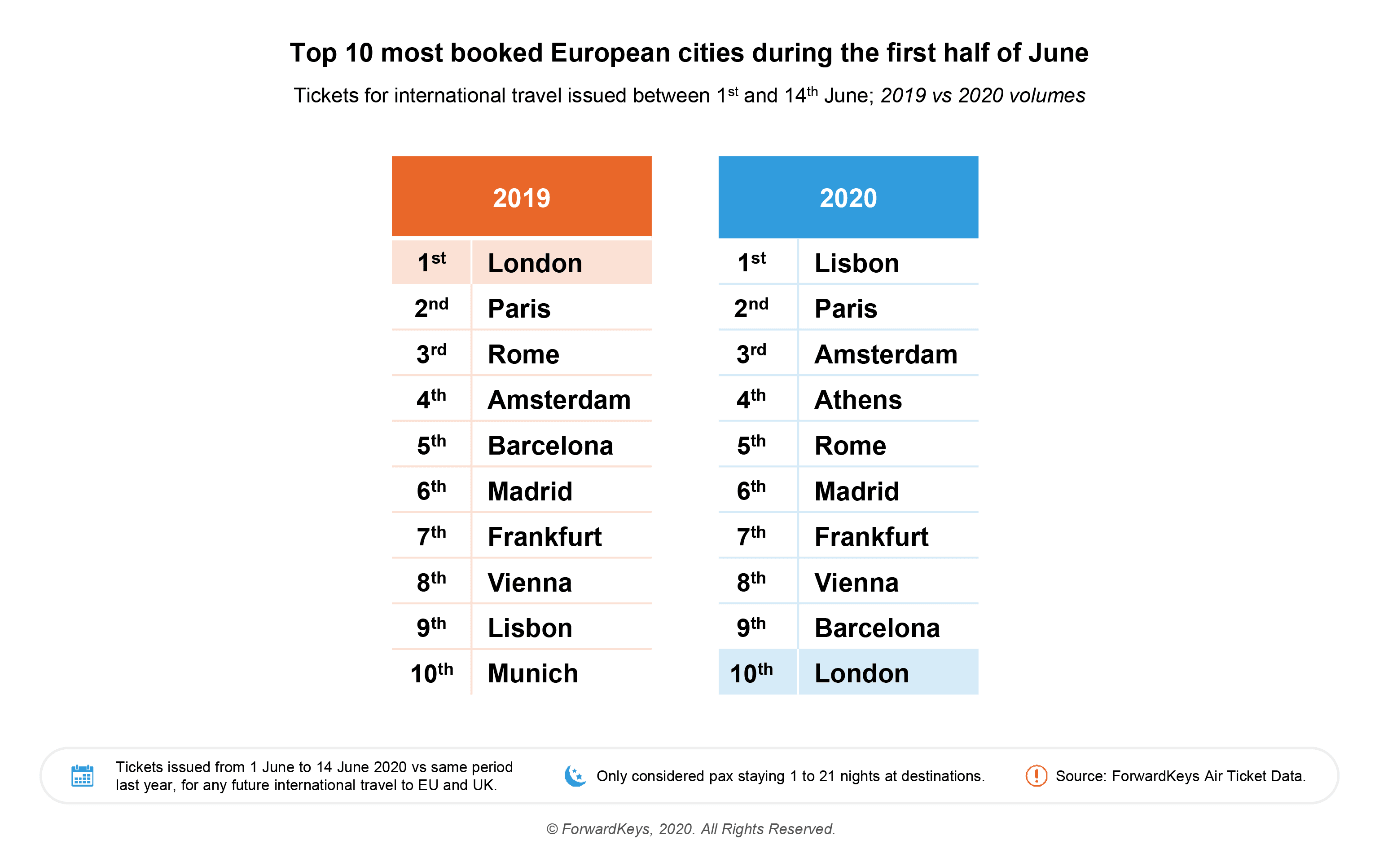 According to ForwardKeys research, new tickets issued for future international travel to the European Union (EU) dropped by 84.4% in the first half of June compared to the same period in 2019, recovering from a 94.5% overall decline in May.

Meanwhile, bookings to the UK plunged by a staggering 96.7% in the first half of June, almost unchanged from the precipitous 97.2% collapse in May. 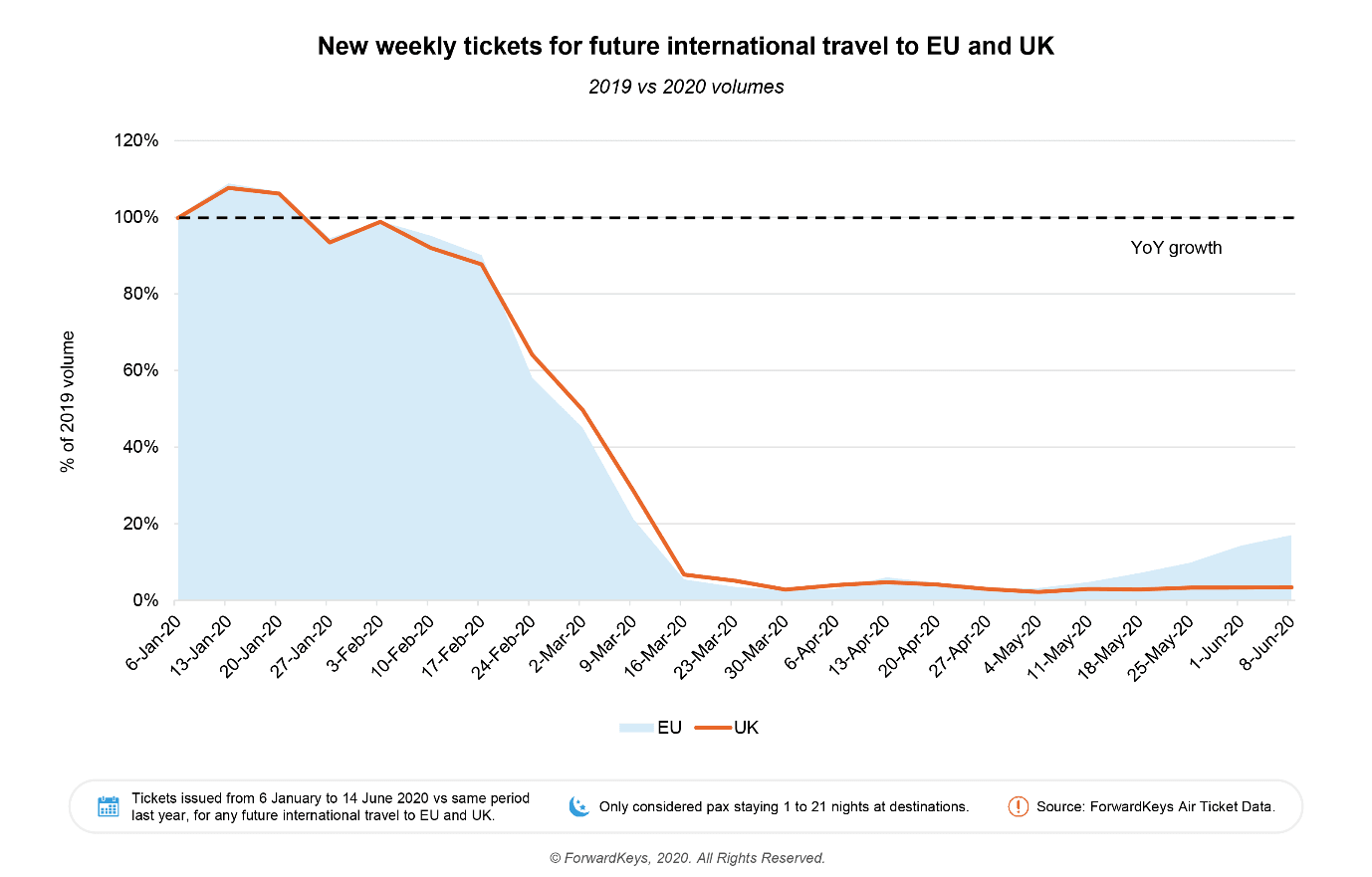 New flight bookings for all international future departures from the EU slumped by 80.2% in the first half of June 2020, compared to the same period in 2019, recovering from a hefty 92.3% decline in May.

By comparison, bookings from London only recovered to an 89.8% year on year decline during the first half of June, compared to a punishing 94.0% decline in May.

Gloria Guevara, WTTC President & CEO, said: “Travel restrictions and quarantines have continued to quash air travel and strangle demand for travel to and from London, causing it to fall to the bottom of the league for top ten most booked European cities, according to latest flight bookings.

“However, analysis by ForwardKeys clearly shows demand for flights to and from Europe has begun to recover, thanks in part to a relaxation of travel restrictions which has fueled the recovery in the Travel & Tourism sector.

“We eagerly await the UK government’s announcement it will finally allow travellers to make plans for the summer and visit destinations across the whole of Europe and allow the UK Travel & Tourism sector to kick-off its much needed recovery.

“The implementation of global protocols as well as testing and contact tracing for intercontinental arrivals, as unveiled by WTTC’s Safe and Seamless Traveller Journey initiative, will restore consumer confidence and encourage travelling to resume.”

“We believe these measures will allow travellers to meet the huge pent up demand to travel once more and enjoy a much-need summer break while enabling the Travel & Tourism sector to re-open for business, restoring the livelihoods of millions of people dependent upon tourism.

“The success of the popular holiday destination of Portugal in attracting visitors follows the government's implementation of a number of enhanced health and safety measures. These are, in line with our global protocols, designed to restart this important sector and ensure safe travel. We are delighted to recognise these efforts through the WTTC Safe Travels stamp.”

Olivier Jager, CEO, ForwardKeys, said: “It’s alarming to see London, which is Europe’s most popular capital to visit, falling from top spot to 10th place in the ranking of most booked European cities during the first half of June.

“The UK’s tough new quarantine regulations are almost certainly responsible; and that conclusion is further reinforced by the difference between inbound and outbound bookings. ForwardKeys research clearly shows that European air travel has begun to rebound with a slow but steady rise in bookings, compared to the same period last year.”

Last year, the UK attracted more than 40 million overseas visitors. This data from WTTC and ForwardKeys shows that if the UK government continues to drag its heels in announcing the next steps for reopening the country, including the removal of barriers such as quarantine and establishing ‘air corridors’, it will have a devastating effect on the Travel & Tourism sector.

This latest data comes on the back of a series of WTTC measures which are designed to rebuild global consumer confidence and encourage the return of Safe Travels.

It was also developed for airlines and airports, according to International Civil Organization (ICAO) Council Aviation Recovery Taskforce (CART) Take-off guidance, to enable them to follow strict health and hygiene regimes to re-opening for business.

The welfare of travellers and the millions of people employed throughout the Travel & Tourism sector were at the heart of the protocols and were backed by the United Nations World Tourism Organization (UNWTO).

Evidence from WTTC’s Crisis Readiness report, which looked at 90 different types of crises, highlights the importance of public-private cooperation to ensure that smart policies and effective communities are in place to enable a more resilient Travel & Tourism sector.

According to WTTC’s 2020 Economic Impact Report, during 2019, Travel & Tourism was responsible for one in 10 jobs (330 million total), making a 10.3% contribution to global GDP and generating one in four of all new jobs.