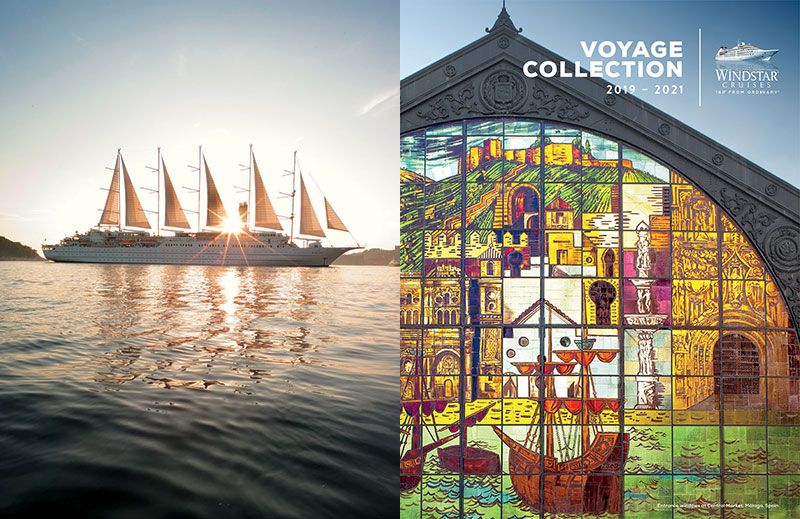 Cruise lines have had to update their deployment plans several times over the past year. To provide clarity on voyage plans, small ship cruise line Windstar Cruises has released a new printed voyage planner brochure.

new printed voyage planner brochure with nearly 200 pages of information detailing offerings from when its first yacht will set sail on May 1, 2021 through May, 2023.

“This beautiful coffee-table publication is meant to educate and inspire people about Windstar and the 180 degrees from ordinary experience we have to offer,” says Windstar Cruises’ President Chris Prelog.

“In 2021 through 2023, we have a mix of long-time favorites and fresh new itineraries, recently transformed yachts and exciting new cruise tours. We have planned further out so people can book early.”

Windstar realized that now, more than ever, travelers are looking even further ahead to plan their next cruise vacation. That’s why the new Voyage Collection brochure details sailings through May of 2023, giving travelers a chance to plan ahead with a comprehensive reference in hand. The brochure will begin to land in mailboxes this week, and those interested in requesting a copy or viewing a digital version can access it here: https://www.windstarcruises.com/request-a-brochure/.

Its much-anticipated transformation of three Star Plus Class ships (with new restaurants, suite choices, and environmental improvements) will come to fruition in 2021 and will be a major development for the line, offering a range of upgraded experiences, more deck space and alfresco dining and a guest capacity of 312 per yacht.

Windstar’s updated Travel Assurance Booking Policy allows cancellation up to 48 hours prior to departure on 2021 cruises.

Prelog says the company knows health and safety is a top concern for travelers. Windstar consulted with the epidemiology department at the University of Colorado’s Anschutz Medical Center and developed a new Beyond Ordinary Care program, which is a multi-layered strategy with key hospital-grade elements: HEPA filters and UV-C ultraviolet germicidal irradiation to filter and disinfect the air, plus electrostatic sprayers to sanitize all surfaces throughout the yacht. The company hopes this extra effort to provide a safer environment on board is giving consumers (both avid cruisers and new ones) the confidence to book.