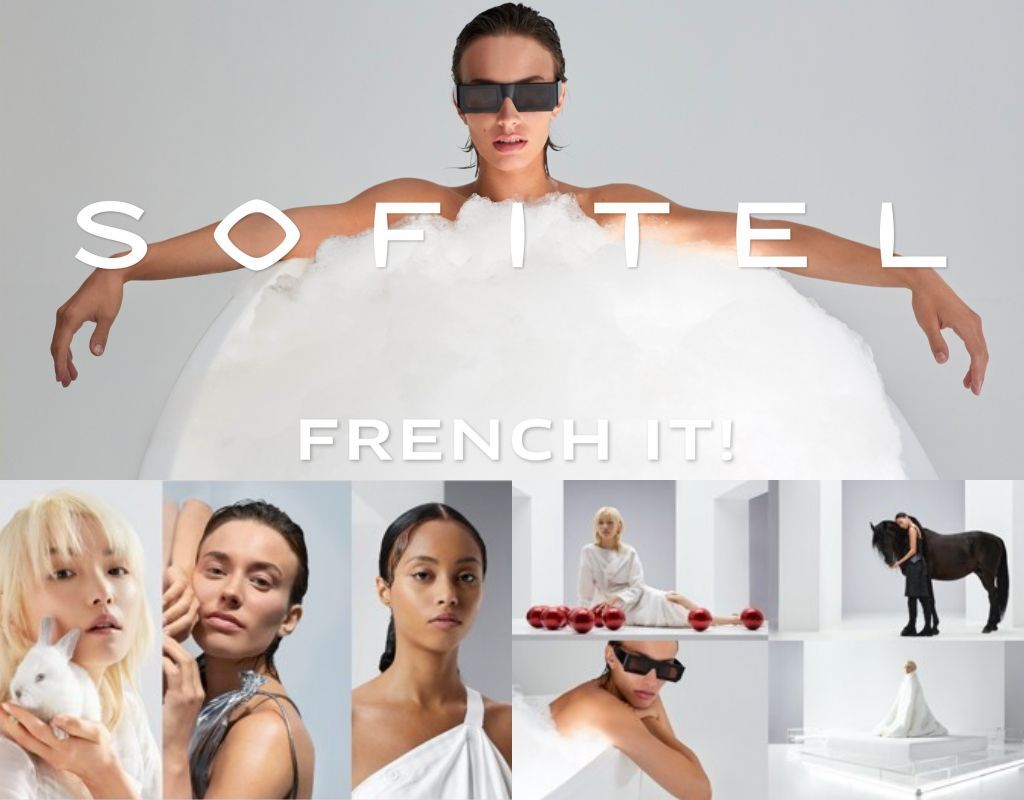 Revealing an edgier and more playful expression of the brand’s Live The French Way ethos, Sofitel is launching FRENCH IT!, a global digital campaign of six stylish short films that spotlight the brand’s passion for arts and culture by bringing the whimsy of the French language to life.

The FRENCH IT! films capture an intriguing new mood with their refreshing take on French idioms that are little known outside of France, inviting all to Live The French Way through the richness of the French language. As a powerful, influential and respectful voice on modern French Art de Vivre, Sofitel shares the playful attitude in which the French express themselves, with a selection of quirky sayings creatively captured through a highly conceptual and contemporary lens.

“French Art de Vivre is a worldwide reference for fine dining, spectacular wine, world-class design and wellbeing - all of which lies at the very heart of the Sofitel brand and has contributed to its worldwide success since its debut in 1964. Today, Sofitel plays a very important role in Accor's portfolio and is one of the most well-known brands in luxury hospitality with a continued focus on global development, especially in Greater China and Southeast Asia, with recent openings including Sofitel Ambassador Seoul in South Korea, Sofitel Hangzhou Yingguan in China and Sofitel Adelaide in Australia. The FRENCH IT! campaign was developed to help Sofitel reaffirm its place in luxury with a more edgy and playful attitude, alongside other leading French brands in fashion, jewelry and lifestyle living,” said Alexander Schellenberger, Chief Luxury & Premium Brands Officer, Accor.

Conceived by the in-house Accor Creative Studio – Studio 66 – the campaign engages French expressions that are not globally known to tap into ‘discovery’, ‘self-enlightenment’ and ‘luxury’ consumer trends.

Connecting and appealing universally through humor, the campaign focuses on the idea that the French language contains funny, colloquial expressions. Through these expressions, Sofitel connects to its hotel experience in an unexpected, tongue-in-cheek manner in a series of digital episodes.

THE FILMS AND ASSOCIATED FRENCH IDIOMS

Viewed through the lens of the brand’s chic and passionate personality, Sofitel’s new digital campaign features a diverse cast of confident and powerful women, each embodying what it is to Live The French Way. They include Dancer Helena Olmedo Duynslaeger, Musician Lomijoh, and Korean Art Director Moon Kyu Lee.

Each film makes use of dynamic camera angles and edgy composition, pushing the subjects to the forefront in a bold, confident and playful manner. Reflecting hotel offerings from wellness and gastronomy to social and room experiences, this strong visual language is used to drive interest and create engagement in a light-hearted disposition. The soundtrack to FRENCH IT! titled "À La Française” by Annie Plummer, Yan Gorodetzki and Bruce Keen and edited by Benzene Editions. was composed and recorded exclusively for Sofitel.

“We went back to the roots of the brand, offering French ‘Art de Vivre’ to everyone. We deliberately selected a non-French cast, because living the French way is about embracing certain values regardless of nationality: an unapologetic personal style, sensuality, audacity, free spiritedness and a dash of unconventionality. This strong female cast is a reaction to the traditionally masculine representation of luxury and business travel,” said Jean- Guilhem Lamberti, Chief Creative Officer, Accor and director of the Sofitel FRENCH IT! episodes.

Sofitel is an undisputed worldwide leader in the luxury hotel sector with a rallying cry of ‘Live the French Way’, born with the vision to bring its culture of Art de Vivre into an often unimaginative and undifferentiated segment of the industry. Modern luxury travelers are invited to eat, sleep, enjoy, travel, stay, celebrate and Live the French Way at Sofitel through the brand passions of design, gastronomy, arts & culture, and well-being. Upon arrival, guests are greeted in French by Sofitel staff wearing made-to-measure designs created by Paris-based fashion designer Léa Peckre. In the lobby, senses are awakened by the wafting scent of Essence de Sofitel, a gorgeous fragrance created by renowned perfumer Lucien Ferrero, and in rooms indulgent French bath amenities and the iconic Sofitel MyBed await, providing the ultimate rejuvenation. Signature Sofitel Sounds by French music artist Mosey sets a sultry and insouciant atmosphere. In the late afternoon, guests indulge in Le Goûter or L’Apéritif in the hotel bars, followed by Gastronomie Française in the dining venues.

“Our ‘Frenchness’ is the attribute most frequently praised by our guests and most often mentioned within their feedback, so we know that our culture is important to them. Our unique sense of joie de vivre is felt at our hotels in more than 40 countries across five continents, and it’s a defining element that has become the signature of the brand.”

Sofitel’s FRENCH IT! global campaign will launch in the UK and France on 8 November 2021 across key social platforms including Facebook, Instagram, LinkedIn and YouTube, and in China on 30 November 2021.