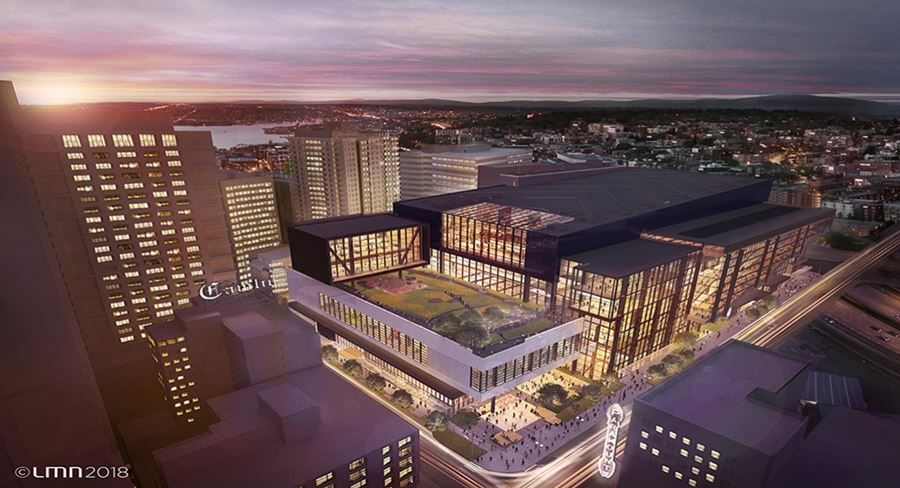 The Washington State Convention Center's (WSCC) $1.8 billion Addition project and some 2,000 construction jobs are in jeopardy if federal stimulus funds are not secured to keep workers completing the project.

The deep drop in lodging-tax revenue in King County due to the coronavirus pandemic has created a gap of roughly $300 million in financing capacity needed to complete the project in 2022.

The facility will be a key tool for regional economic recovery following the COVID-19 pandemic and for the region’s long-term economic vitality. Given the project’s widespread economic impact, leaders from across the region are united in their support for future federal funds to keep the project on track.

Leaders representing the WSCC, King County, labor, business and civic groups sounded the alarm. “The Convention Center is an important centerpiece of our regional economy,” said King County Executive Dow Constantine. “Delaying construction on the Addition project would have devastating effects on construction workers, the hospitality industry, and our regional economy, and would have ripple effects statewide.”

The project was 30 percent complete, with nearly 90 percent of the materials ordered, when the COVID-19 public health emergency effectively shuttered the entire tourism sector of the state’s economy. Hospitality and lodging were particularly hard hit.

The Convention Center had scheduled its final round of financing to complete the Addition construction for this year and next. With the collapse of the tourism sector – and the subsequent drop in lodging-tax revenue to back the bonds – the financing is in peril, as is the completion of the Addition without a harmful delay that would bring a host of additional costs.

Matt Griffin, principal at Pine Street Group, the project’s developer, laid out the severity of the situation.

“Within a year, construction on this project will come to a halt if we don’t secure federal financing assistance for the project,” Griffin said. “This project has the potential to be one of our region’s most important economic recovery tools. Delaying it would be a huge loss for our community.”

The Addition project will help meet the strong demand for conventions in Seattle. “Conventions are already booked for years out that will use the new space,” said Jeff Blosser, president and CEO of the Washington State Convention Center. “We have customers who want to come to Seattle, and we need to take care of them in June of 2022 and beyond. We want to satisfy our customers with completion of the facility on schedule.”

Tom Norwalk, president and CEO of Visit Seattle, worries about the consequences to Seattle’s tourism industry, which is already hurting.

“Tourism in Seattle and King County is an $8 billion industry,” he said. “The attendees of our large national conventions at the WSCC play a large role in that. Their spend contributes to restaurants, retail and cultural institutions – in addition to our hotel economy. If we are forced to stop construction – we will be effectively delaying recovery, and this will not only impact downtown Seattle but our entire region.”

Diana Birkett Rakow, vice president of external relations at Alaska Airlines and chair of the board for the Seattle Metropolitan Chamber, said the Convention Center Addition is core to the recovery of the travel, hospitality and tourism sectors.

“The travel, tourism, and hospitality industries and our employees face one of the greatest challenges in history – and we are a significant part of our region’s fabric and economy. We’re hugely proud of our hometown and love to share it with visitors. And we need to build on smart infrastructure investments underway, like the Convention Center Addition, to fuel recovery and remind the world that Seattle is ‘open for business,’” she said.

Jon Scholes, president and CEO of the Downtown Seattle Association, said, “The coronavirus pandemic has already had a severe impact on businesses in our downtown core. With support from city, regional and federal leaders, I’m optimistic we can find a funding solution to complete the WSCC Addition project and ensure a faster recovery and brighter future downtown.”

The WSCC Addition project expects some 2,000 union jobs will be delayed or lost if a lack of a funding bridge forces construction to stop.

Nicole Grant, executive secretary-treasurer of MLK Labor and WSCC board member, said, “As one of the largest construction projects in our state, we need to do all we can to protect our region’s workers from further economic uncertainty. Keep the Addition moving. We need these jobs and the economic benefits of the project now more than ever.”

General contractor Clark Lewis began work on the Addition in July 2018. Over the three-plus-year construction period, the project team is expected to hire as many as 6,000 union construction workers and hundreds of apprentices. The project will pay more than $100 million to the region in construction sales tax alone.

Once open, the Addition, known as the Summit building, is expected to create about 3,900 new, ongoing jobs and generate approximately $260 million in new customer spending and $19 million in sales taxes annually. It also will create a key link in the Pike/Pine corridor between Capitol Hill and the renovated Waterfront.