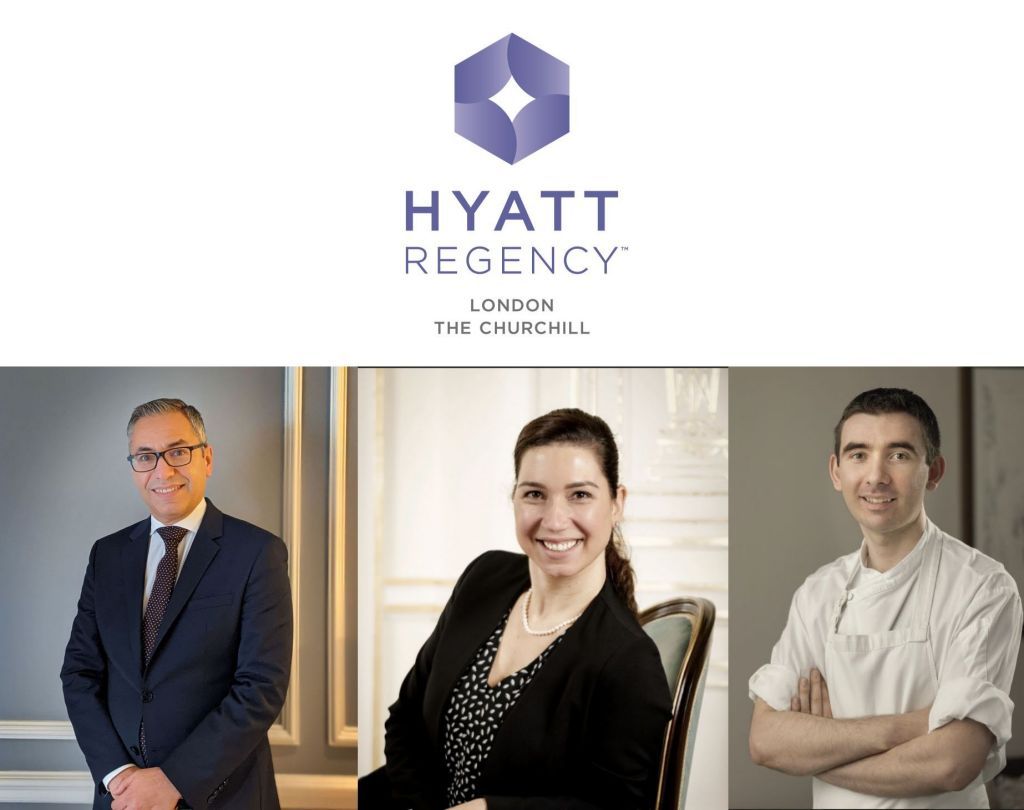 Hotel Manager, Georges Moura; Head Pastry Chef, Aurélien Dupont; and Director of Food & Beverage, Émilie Massat; have all recently joined the luxury hotel, as part of a wider expansion across the team.

Of the new hires, Arnaud de Saint-Exupéry said “I am thrilled to have three such talented and passionate individuals join us here at Hyatt Regency London - The Churchill. It is an exciting time for the hotel as we start a new year and expand the team, and I am excited to see what 2022 has in store with the addition of Georges, Aurélien and Émilie. They are much welcomed additions to The Churchill team, as well as existing and continuing members of the wider Hyatt family.”

Mr. Georges Moura was appointed as the new Hotel Manager on 1st September 2021. Georges has been an established member of the Hyatt family for nearly 20 years, and has spent considerable time working across a number of the brand’s properties in Europe. Having risen from Guest Services Officer as his first role within Hyatt, Georges has been a Hotel Manager since May 2012.

Originally from France, Georges began his career in Paris working as a consultant in strategy marketing and media, having studied marketing and journalism. Whilst working in his chosen field of study, an exciting opportunity arose within the hotel industry where he resultantly fell in love with hospitality. He found the opportunity to meet with remarkable people; to work with passionate and hardworking individuals; and the fact that no two days are the same; particularly appealing - and ultimately paved the way for his love of the industry.

Georges’ established relationship with both the industry and the Hyatt brand began with a role as Guest Services Officer at Hyatt Regency Paris Madeleine, and has also worked at Hyatt Regency Belgrade as Director of Rooms; Hyatt Regency Casablanca; and Hyatt Place Taghazout Bay Resort & Villas. Most recently, Georges made the move to London, becoming General Manager at Hyatt Place West London, whilst also affirming his passion for the city and its diverse landscape and exciting mix of cultures.

With his nearly two-decade career in the hospitality industry and extensive knowledge and experience of the Hyatt brand, Georges Moura is a tremendous asset to the Hyatt Regency London - The Churchill. Georges attributes his long-standing relationship with the Hyatt brand to the family-feeling that the brand prides itself on and tremendous growth opportunities. In turn, Georges brings with him electric positivity and exciting new ideas. With Georges’ guidance, the hotel will continue to provide guests with memorable experiences and uphold the heritage of which The Churchill is so proud.

Of the new role, Georges said “I am delighted to have joined such an iconic hotel, of which has a wonderfully historic name attached - I will ensure that all of our guests experience the very best of British hospitality. Of course, the hospitality industry has had its recent challenges, but I see every challenge as an opportunity; and it is now more important than ever to remain agile and optimistic. The future of hospitality is exciting; I’m thrilled to be a part of it and highly encourage anyone who has a passion for service and people in general to consider starting an exciting career in this field. There are no borders when you work in the hospitality industry; and the opportunities provided take you across the globe and across different cultures.”

Recently appointed as the new Director of Food & Beverage, Émilie Massat is the newest addition to the Hyatt Regency London - The Churchill family. Émilie will work across The Montagu Kitchen and The Churchill Bar & Terrace and looks forward to overseeing events in the hotel’s newly refurbished event spaces, along with all other opportunities that 2022 offers.

Émilie is an exciting new addition to the hotel, having worked in Luxury Hospitality and Tourism Management for over 16 years, and within that, part of the Hyatt group for over 10 years. She originally began her career at the Palacio Duhau - Park Hyatt Buenos Aires as Food & Beverage Assistant Manager, before becoming Events Manager. It was during this time that she found her passion for working in the hospitality industry and the exciting challenges that it offers.

Following her time in Buenos Aires, Émilie has since worked at Grand Hyatt Dubai as Associate Director Food & Beverage Sales and Operations; the Park Hyatt Kyoto as Food & Beverage Manager; and, most recently, the Hotel du Palais, Unbound Collection by Hyatt in Biarritz, France as Director of Food & Beverage. This will be Émilie’s first role in London, and she is particularly excited by the prospect of working for such an esteemed hotel, Hyatt Regency London - The Churchill, and the opportunities it has in store.

Aurélien works across the hotel and the Montagu Kitchen restaurant teams to deliver delectable pastries and sweet treats to guests for a wide range of occasions, ranging from weddings, birthday parties to special occasions.

Originally from France, Aurélien began his career in Deauville, Normandy. Coming from a family of restauranteurs, he discovered his passion for cooking at a young age and creating sweet delights naturally followed. Aurelien moved to London in 2012 where he worked in a number of luxury hotels and restaurants, including the Dorchester Collection, Brown’s Hotel, The Greenhouse and Intercontinental London Park Lane. Keen to gain an all-round experience in cheffing, Aurélien rose from Commis Chef through the ranks, and first fully specialised in pastry at Intercontinental, honing his craft over two years.

Aurélien utilises his development of pastry and sweet options in his current role at Hyatt Regency London - The Churchill, where he is in charge of all sweet things. In his role, Aurélien likes to surprise and delight guests with bold flavour combinations and his own twist on pastry classics, showing impeccable craftsmanship.

Aurélien will also be responsible for creating a new afternoon tea concept, which will be unveiled in early 2022.