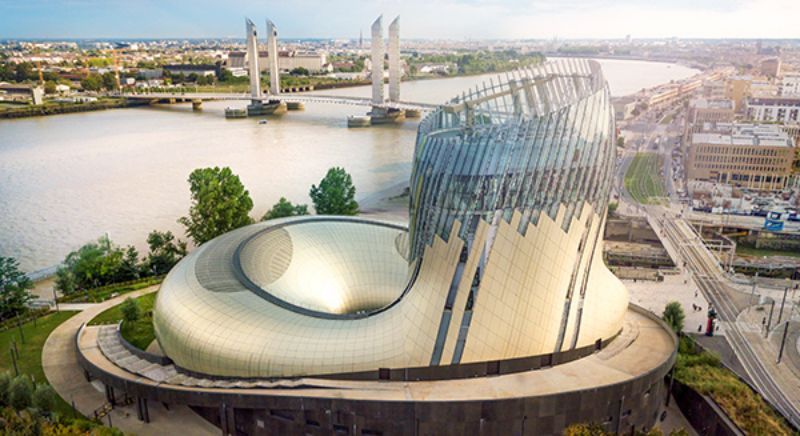 Nearly 7 years after its opening, the Cité du Vin in the French city of Bordeaux is to renew a major part of its cultural offer in 2023.

A large-scale project that has been implemented thanks to the financial support of Europe and the Nouvelle-Aquitaine Region, as part of the European Union response to the Covid-19 pandemic, along with funding from Bordeaux Métropole, the City of Bordeaux, patrons, and other resources specific to the Foundation for wine culture and civilisations.

With an entirely re-thought permanent Exhibition (change of content, equipment and staging) and 2 new tasting experiences (Bordeaux 360° workshop and Immersive tasting tours), many new features await visitors to the Cité du Vin in 2023.

“Since the creation of the Cité du Vin, our teams have worked tirelessly to devise new projects offering visitors original, daring and high-quality experiences. In 2023, we are going even further with an unprecedented cultural, educational and entertaining project,” says managing director Philippe Massol.

In 2022, the Cité du Vin initiated a vast renewal programme, called Neo-Experience 2023, designed to keep it attractive, improve visitor experience and satisfaction, and respond to current environmental and societal issues. From the staging to the digital equipment, from multimedia productions to tasting experiences... the entire cultural offer and tour experience has been reviewed for 2023 to offer French and international visitors a more enjoyable, original and unforgettable discovery of the Cité du Vin. A large-scale project that has been made possible thanks to the financial support of Europe and the Nouvelle-Aquitaine Region, as part of the European Union response to the Covid-19 pandemic, along with funding from Bordeaux Métropole, the City of Bordeaux, patrons, and other resources specific to the Foundation. Some new features are already in place such as the new version of the tour companion, developed in house by the Cité du Vin digital team, to activate the audio and video content in the permanent Exhibition, the new web app My visit to accompany visitors and help them make the most of their visit (map, description of the wines offered in the Belvedere and workshops, the day’s programme, etc.) and the entirely redeveloped luggage lockers. But the most important new features can be discovered in 2023. For this reason, the Cité du Vin will temporarily close its doors between 2 January and 3 February, to make way for a vast project to renew the permanent Exhibition.

The first new feature to appear: Bordeaux 360°. This new immersive workshop formula can be discovered as from the end-of-year holidays, offering an original and unprecedented one-hour journey to discover Bordeaux and its vineyards, and the wide diversity of its wines.

From the foot of an oyster hut in the Arcachon Bay or from a Bordeaux rooftop, through the landscapes of the Médoc and the more hilly Libourne region, participants will be able to plunge into the heart of the Bordeaux region and explore the winegrowers’ know-how, from harvest to bottling. It is also an opportunity to understand how Bordeaux winegrowers adapt, today offering a multitude of styles ranging from the traditional to the modern, to meet consumers’ new and changing expectations.

On the programme: tastings of 4 Bordeaux wines with total immersion in 4 different landscapes thanks to spectacular 360° images, in a carefully designed sound and music environment! A unique tasting experience, led by a sommelier, that will awaken all the senses. It has been designed in partnership with the École du Vin de Bordeaux (Bordeaux Wine School).

The most important new feature to come out of the Neo-Experience 2023 project concerns the Cité du Vin’s permanent Exhibition. The Foundation for wine culture and civilisations is renewing some of the staging, digital equipment and multimedia productions in the permanent Exhibition. Visitors will be able to discover the new features as from 4 February 2023.

The heart of the Cité du Vin experience, the 3,000 m² permanent Exhibition uses digital and interactive technologies to bring to life the epic story of wine culture, which has inspired people and shaped their lives and their regions over thousands of years. History, geography, art, gastronomy, science, oenology... wine can be discovered in all its facets.

In its 2023 version, the permanent Exhibition will consist of 6 Universes, 18 thematic areas and 1 monumental work of art. The scientific and cultural goals of the new museography mean that there will be a strong focus on nature, living beings and the women and men of the wine world.

To carry out this work, the Foundation for wine culture and civilisations has called on a multidisciplinary creative team from different backgrounds, in addition to its own staff. Agence Clémence Farrell (staging and exhibition space design) accompanied by Ich&Kar studio, by The Mill (writing,storyboards, audiovisual) and Ilusio (animations, multimedia) are working on this major museographic renewal project. To design and produce customised and innovative audiovisuals without changing the staging, the Foundation for wine culture and civilisations called on Sim&Sam, Les Films d’ici, Clap 35, Blue Yeti and The Mill.

The Via Sensoria immersive tasting tour is an artistic, digital and immersive creation developed by GEDEON Programmes for the Cité du Vin, to be discovered from 7 April to 5 November 2023. This new offer is aimed at everyone, including those who are not wine connoisseurs and families. In a setting that is unique in the world, it adds to the existing range of tastings at the Cité du Vin.

Participants in Via Sensoria are invited to experience a unique tutored tasting experience by strolling through 4 immersive and dreamlike spaces, combining visual, audio and poetic creations. For its first edition, Via Sensoria will take visitors on a journey to the rhythm of the seasons.

At the entrance to the 4 spaces (spring, summer, autumn and winter), a tasting of world wines or non-alcoholic beverages will be led by a sommelier-tutor. An experience that will lead everyone to challenge their sensations and emotions.