Leipzig Commemorates the Peaceful Revolution of 1989 on Oct.9 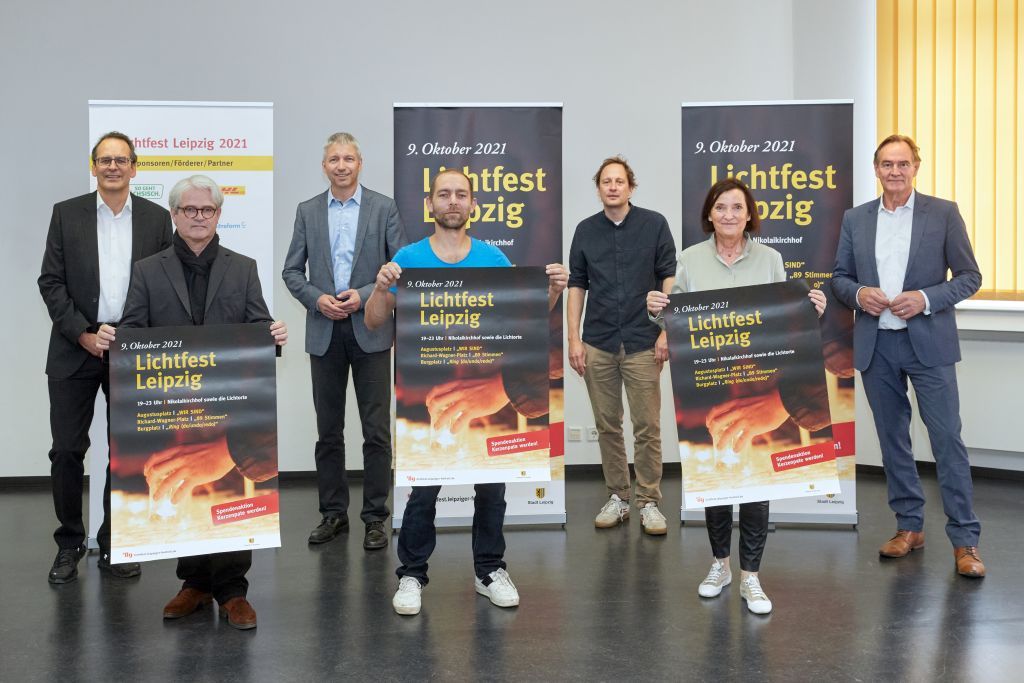 More than 70,000 people gathered on the inner city ring road on 9 October 1989 and protested peacefully against the dictatorship.

They met the threat of violence from armed security forces with courage and level-headedness. The secretly recorded news pictures from Leipzig encouraged people in all parts of the GDR to take their protest to the streets.

To commemorate this crucial day of the Peaceful Revolution, as well as to create a new awareness of the courage and peaceful determination of the demonstrators on October 9, 1989, Leipzig celebrates the annual Day of Remembrance with very special events. In order to make the memory and its significance for contemporary democracy continuously clear, there are also places in public space, apps and museums that can be experienced throughout the year.

Leipzig Festival of Lights 2021 with International Perspectives at Three Locations

In 2021, the Leipzig Festival of Lights presents itself with a new, decentralized concept and takes place at several locations within the inner city ring. The light installations can be experienced on Saturday, 9 October 2021 from 7 pm to 11 pm. Leipzig is often exemplary as a symbol for the success of a peaceful change in Europe. Therefore, three European artist teams from Germany, Hungary and Spain show their perspective on the autumn of 1989. Under the guiding principle "The light spreads in the city", Augustusplatz, Burgplatz and Richard-Wagner-Platz will become places of light on 9 October 2021. The keywords memory, transformation and sustainability set the respective basic accent of the projects and were developed together with local cooperation partners from the urban society. In the St. Nicolas Churchyard stands a candle podest forming a big 89, which is traditionally lit by visitors. There the Festival of Lights will be opened at 7 pm with short greetings.

WE ARE – Participative Video Installation by Glowing Bulbs (Budapest)

The center of the project WE ARE is a tower with 3,5m height and 4,5m diameter on Augustusplatz. Twenty laser projectors project motifs from historical photographs, but without a concrete image surface.Therefore, 300 white banners are available for visitors to use to capture the image like a screen. A single person can make only a small part visible. When several people come together, a larger image appears.

For the artists Márton Noll and Tamás Zádor of Glowing Bulbs, this form of participation is very important: "We want people to experience and rediscover seemingly familiar and unfamiliar images for themselves in a different way through our installation. The visitors should realize that it takes courage to hold up a sign on a street, even if this is no longer associated with any danger today. This gesture of holding up a sign on the street gives strength to others and raises many questions."

On Burgplatz, light festival visitors can expect a walk-through, dynamically illuminated rotunda named RING with a diameter of around 10 meters and a height of almost three meters. It is covered on the inside with450 reflecting balloons that reflect both the light of the video production and the visitors. The outside of the rotunda is covered with 1,400 white latex balloons and designed with recycled materials. Visitors can choose and change their location, making the image and perspective always different. The shape of theRING refers to the desirable cycle of materials and products. It also refers to the inner city ring that the people of Leipzig so courageously walked on during the Monday demonstrations in the fall of 1989.

The artist duo Ben Busche and Miguel de Guzmán from Brut Deluxe explain what the topic of sustainability has to do with 1989: "The progressive environmental destruction in the former GDR, the overexploitation of nature, dirty rivers - all of this was a very strong motivation for many people in 1989 to take to the streets and stand up for change. At that time, it took great courage. It also shows that many of the concerns of1989 are still at least as relevant in principle as they were then."

On Richard-Wagner-Platz, an open light labyrinth made of quotes from contemporary witnesses can be experienced, which only becomes visible through the presence of visitors. "If no one had come, nothing would have happened." This simple fact, and thus the courage and determination of all those who took tot he streets in 1989, is taken up symbolically by the 89 VOICES project. For it is only through the people moving around the square at the Leipzig Festival of Lights that the writing elements are uncovered. The more people there are at the same time, the larger the mosaic becomes and the more messages can be read.

The artists Florian Giefer and Denis Bivour have processed the special perspective of women on the Peaceful Revolution in their project: "It was incredibly exciting to hear how a relatively short period of time like the fall of 1989 can influence an entire life and turn it upside down. Even after more than 30 years, the people who were there are still deeply touched emotionally." 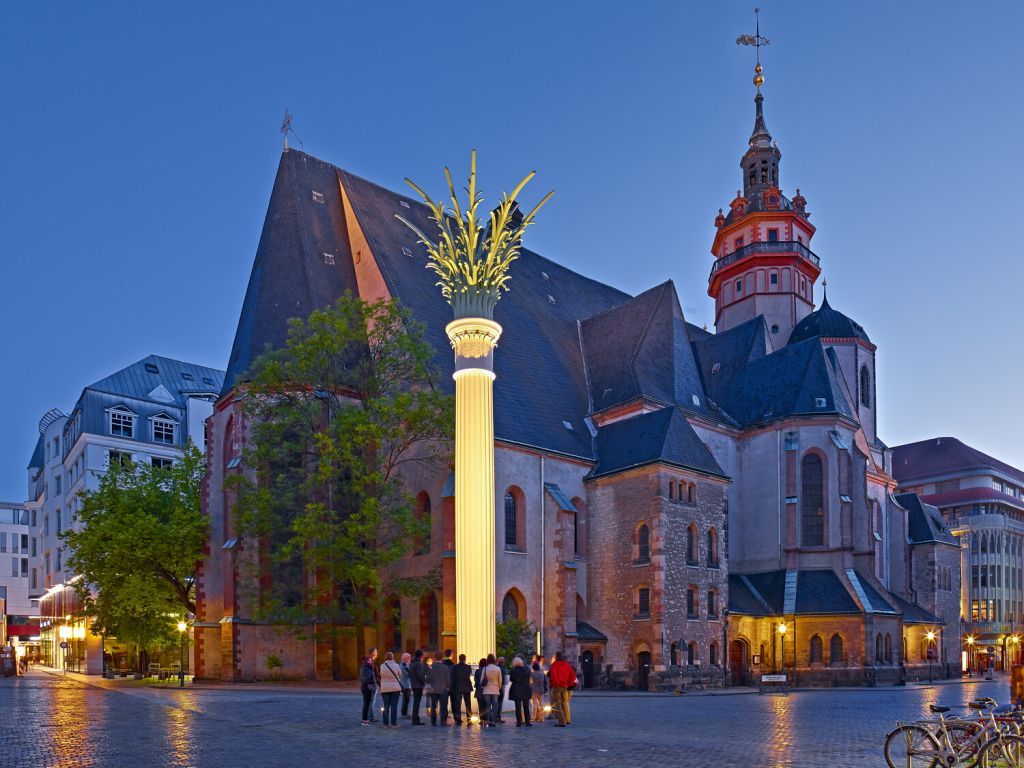 All light projects at a glance:

Year-round Memorials to the Peaceful Revolution in Leipzig

Leipzig has a lively culture of remembrance in public space. Numerous authentic sites of the PeacefulRevolution bear witness to the events of 1989 and can be experienced all year round.

Starting from the peace prayers in the St. Nicholas Church, the protest conquered the public space in 1989. Since 1999, a replica of a column crowned with palm fronds from the nave of the St. Nicholas Church has stood in the St. Nicholas Churchyard. The artwork by Andreas Stötzner and Markus Gläser commemorates the starting point of Leipzig's Monday demonstrations. In 2003, a granite fountain designed by David Chipperfield and colored glass cubes by artist Tilo Schulz embedded in the paving of the churchyard were added. They emphasize the importance of public space as a podium for the free expression of opinion by responsible citizens. www.nikolaikirche.de

At 20 original locations in the city center, the open-air exhibition "Places of the Peaceful Revolution" and the accompanying app LEIPZIG 89 allow visitors to experience the spirit of change in the GDR in the years1989-1990. Designed as a chronological tour, the exhibition illustrates how the oppositional actions of individuals gave rise to a mass movement that brought down the dictatorship in the GDR and cleared the way for German unity. The steles with German-English texts and images also contain a QR code to the museum app LEIPZIG 89. This offers a GPS-supported city tour and an audio guide as well as more than 300 historical photos, documents and contemporary film footage. The free download is available in German,English, French, Italian, Dutch, Spanish and Arabic. www.runde-ecke-leipzig.de/herbst89-app

With the app Zeitfenster (time slot) from the University of Leipzig, it is possible to interactively merge historical photographs with the current camera view of a tablet or smartphone at 25 locations in downtownLeipzig and experience historical change. In addition to interactive access, the app preserves a treasure trove of an additional 300 or so retrievable artifacts, such as original documents from state security files, civil movement leaflets, and contemporary video footage. Through additional integrated audio guides as well as a navigation function of the route, the city of Leipzig becomes a virtual history trail. The app is available free of charge in German and English. www.zeitfenster.uni-leipzig.de

Since 2009, a bell at the entrance to Grimmaische Straße has commemorated the decisive Monday demonstration on October 9, 1989, which "heralded" the end of the GDR. The Bell of Democracy was a gift from the East German foundry associations to the city of Leipzig to mark the 20th anniversary of thePeaceful Revolution on October 9, 2009. The bell, designed by artist Via Lewandowsky, was cast at the Lauchhammer art foundry.

Since 2012, the Memorial Museum in the "Round Corner" has officially been one of the sites of theEuropean Cultural Heritage Iron Curtain. During the Peaceful Revolution, the Monday demonstrations passed by the building complex of the former district administration of the Leipzig State Security, which was peacefully occupied on December 4, 1989. Thus, today the "Round Corner" is both an authentic site of the history of repression and oppression in the GDR and of self-liberation from the dictatorship of the state security through the Peaceful Revolution. A piece of the Berlin Wall also stands in front of the memorial. www.runde-ecke-leipzig.de