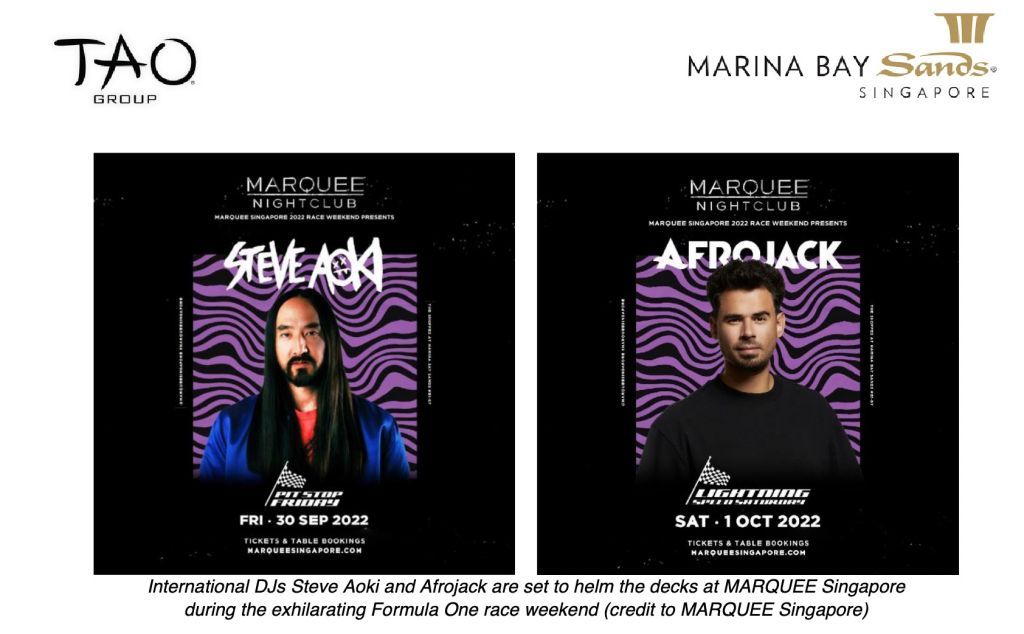 Marina Bay Sands and TAO Group Hospitality will rev up for the Formula One Singapore Grand Prix with an array of race-themed parties and specials from 30 September to 2 October.

With Formula One making its comeback after a two-year hiatus, the tracks at MARQUEE Singapore, LAVO Italian Restaurant & Rooftop Bar, and AVENUE Singapore are set for an action-packed weekend.

MARQUEE Singapore is set to be an exhilarating party pit-stop with international DJs Steve Aoki and Afrojack headlining the race weekend on 30 September and 1 October respectively. No stranger to the local nightlife scene, both world-renowned DJs were part of MARQUEE Singapore's star-studded lineup during its grand opening month in 2019.

The revelry at MARQUEE will continue with Dutch DJ and music producer Afrojack helming the decks on 1 October. Since rising to fame with his multi-platinum-selling single 'Take Over Control' in 2010, the Grammy Award-winning DJ has headlined several global electronic dance music festivals. Afrojack was also placed on Forbes' '30 Under 30' entertainment list and has been regularly featured on DJ Mag's list of Top 100 DJs, among other accolades and awards to his name.

For the opening set, Afrojack will be joined by Swiss DJ and producer Gil Glaze, who will play deep and future house hits. As a Sony Music Switzerland artist, Gil Glaze regularly plays MARQUEE Las Vegas and has supported multiple artists, including The Chainsmokers and Marshmello.

MARQUEE, which is currently open on Fridays, Saturdays and the eve of public holidays from 10pm till 6am, offers guests an immersive party experience with its state-of-the-art technologyand cutting-edge sound across 2,300 square metres. In addition to the eight-armed Ferris wheel, the Big Q, partygoers can experience an exciting ride down the three-story spiral slide, Sunny Slide Up, which offers unparalleled views and endless photo opportunities.

Book your room at the Marina Bay Sands today!