Visitors to Dubai can be jailed under cybercrime laws 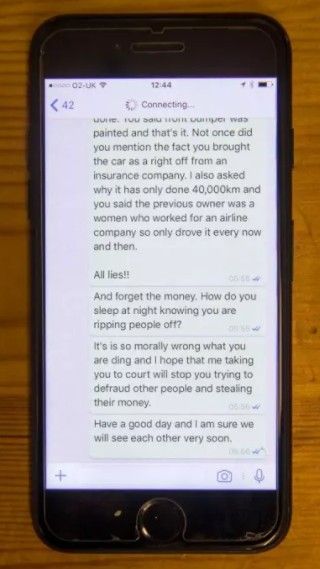 The messages that had Brit Yaseen Killick jailed in DubaiIn the UAE, before you say anything online, you should consider whether or not you would be comfortable saying it in front of the police; because in Dubai, you basically are..

British national Yaseen Killick discovered recently that angry texting can wind you up in jail in Dubai in an instant. After having been apparently cheated by an unscrupulous used car dealer, Killick messaged the man to vent his dissatisfaction, asking him “how do you sleep at night…?”

Yaseen was seized at Dubai airport as him and his wife, Robyn, headed home for christmas 2017. He was arrested and served 3 weeks in prison before being kicked out of Dubai.

Because Yaseen’s exchange with the car dealer occurred through WhatsApp, he was charged under the UAE’s vague cybercrime laws with “insulting or accusing another” online, without any investigation into the validity of his own complaint against the dealer.

“Yaseen’s case highlights yet again how dangerously easy it is to file criminal charges against someone in the UAE and have them convicted”. Radha Stirling, CEO of Detained in Dubai says,“The cybercrime laws in particular make almost anything someone does online potentially criminal.

The laws applied against Yaseen could just as readily be applied against someone who leaves a negative review online of a restaurant or shop or any other business. It is essentially illegal to express criticism or dissatisfaction with a person or company in Dubai, as this could be subjectively construed as an insult, and typically, an accused person will have little or no opportunity to defend themselves or even explain why the criticism was made.

Comments may be misunderstood or misinterpreted and there is a growing culture of using the police to report things that would largely be ignored in other countries. In fact, the UAE cyber crime laws can be applied to someone retroactively and extraterritorially; in other words, someone can be prosecuted in Dubai for something they said online years ago and in another country.”

Charges like the ones made against Yaseen are not uncommon, many unsuspecting and seemingly innocent people have become entangled in nightmarish situations because of the UAE cybercrime laws:

David Haigh of Stirling Haigh was held in prison for six months on allegations of having used social media platform Twitter, to slander his former employer. Fortunately he was acquitted but he was subjected to legal abuse, something that of course, he was never compensated for. Haigh and his former employer were in the midst of a civil dispute and it would seem that keeping Haigh in jail and thus preventing his attention and appearance in the civil dispute, was a motivating factor for their baseless accusations. Haigh commented“It is appalling that someone can be held in the UAE on the basis of another person’s complaint on social media use. This gives too much power to authorities and to the people”.

In 2016 a man was fined Dh250,000 and jailed for insulting woman in Sharjah. The defendant was accused of insulting the woman Whatsapp who then lodged a complaint with the police.

In Abu Dhabi Australian Jodi Magi was jailed and deported over a Facebook post which included a picture of a car parked across two disabled spaces outside her flat in February of 2015. The case attracted worldwide press attention for the 39 year old who is said to have“complained of being traumatised by the extreme reaction to a jpg of a car posted to a closed Facebook page”.

In 2016 British-Australian national, Scott Richards was arrested for sharing a charity post on Facebook raising money for refugees in Afghanistan. Scott unwittingly fell foul of the United Arab Emirates’ laws banning the operation of any charity not registered in the country. As part of an international campaign to have Scott freed from prison,

Detained in Dubai made a video about his situation: Youtube:https://www.youtube.com/watch?v=7sUGhdRNRc8