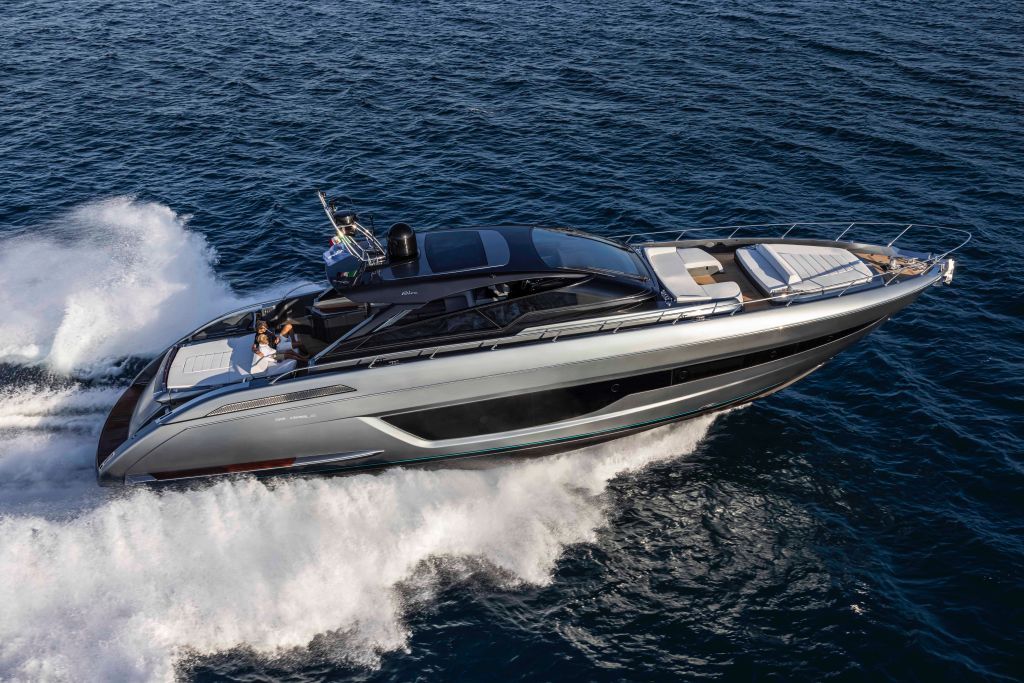 Presented at the Cannes Yachting Festival, the new Riva 68’ Diable represents a spectacular layering of ingenuity, styles and techniques. The new open with built-in hardtop is a blend of elegance, sportiness and liveability.

At 20.67m in length (almost 68 feet) and with a beam of 5.29m (over 17 feet), Riva 68’ Diable made her debut at the Cannes Yachting Festival 2021 and is now set like the purest of diamonds in the range of open yachts under 70 feet, a segment in which the storied Sarnico-based shipyard has long been a recognized leader.

The brainchild of Mauro Micheli, founder with Sergio Beretta of Officina Italiana Design, the firm that has designed all Riva’s yachts for the last 27 years, working in partnership with the Product Strategy Committee led by Mr. Piero Ferrari and the Ferretti Group Engineering Department.

While 68’ Diable is available in all Riva range colors, the first unit will feature the popular Shark Grey, set off by bright black for the detailing and the hardtop.

The exterior styling reflects the new design direction charted by Officina Italiana Design, defining trending lines that express a sportier interpretation of the idea of luxury. The windshield made with spherical crystals features a slight counter-curvature that has become a typical Riva hallmark.

Like all the models in the range, Riva 68’ Diable features functional design elements in mahogany and polished stainless steel, paying tribute to the tradition of the world’s most famous shipyard. They include the aft wings and a mahogany band on the garage door, the steel side handrails around the superstructure, and the solid mahogany low table in the cockpit.

In the stern, the swim platform is integrated into the hull sides, forming a single seamless whole that rises into the cockpit. The steps on the port side of the stern are partially submerged when the swim platform is lowered, revealing others in the hull and creating a convenient way to the enter and leave the water. The garage can contain a Williams SportJet 345 tender and a Seabob. 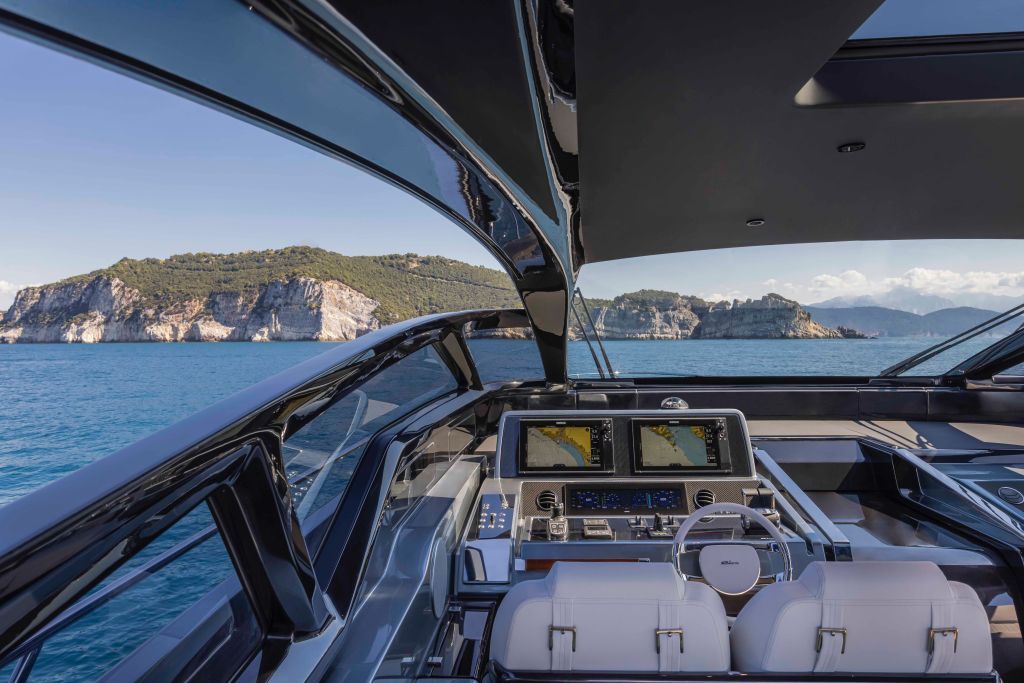 The cockpit furnishings include two big sunpads, one at the water’s edge and another in the form of a chaise-longue, for maximum enjoyment both when cruising and at anchor.

The entrance to the crew area, with a single cabin and separate bathroom, is on the port walkway in this area.

But the stand-out new feature of this open, like the brand new Dolceriva and Rivale 56’ Hard Top, is the carbon fibre and composite hard top integrated into the windshield, with a clean, linear design that hides the technical and technological elements from view. Also fitted with an air conditioning system, it provides protection and shelter for the central areas of the yacht, including the dining area and the helm station on the main deck. The hard top is available on request with a sunroof featuring a two-way opening mechanism (forwards and backwards) that cannot fail to be a source of wellbeing when cruising.

In addition, an automatic powered bimini system integrated into the aft section can be extended to shelter the sofa and chaise-longue area in the cockpit. Additional shelter is provided by awnings over the open side area and the entire stern section.

Under the hard top, the central area contains two facing L-shaped sofas, with the one on the left acting as a dining area accommodating up to six people. On request, the dining area can be doubled up to include both port and starboard sides. A TV measuring up to 49 inches can be fitted behind the second helm station and a convenient icebox is positioned behind the pilot seat.

The helm station, featuring carbon panels and premium polished steel trim, is equipped with both pilot and copilot seats.

As always, safety is a special focus for Riva, as is demonstrated by several functional details, such as the positioning of the life rafts under the starboard sofa.

Another of this open yacht’s main strengths and new features, designed to improve liveability, is

the huge bow area, representing the best-of-breed in terms of concept and spaciousness and offering the maximum in freedom and relaxation. 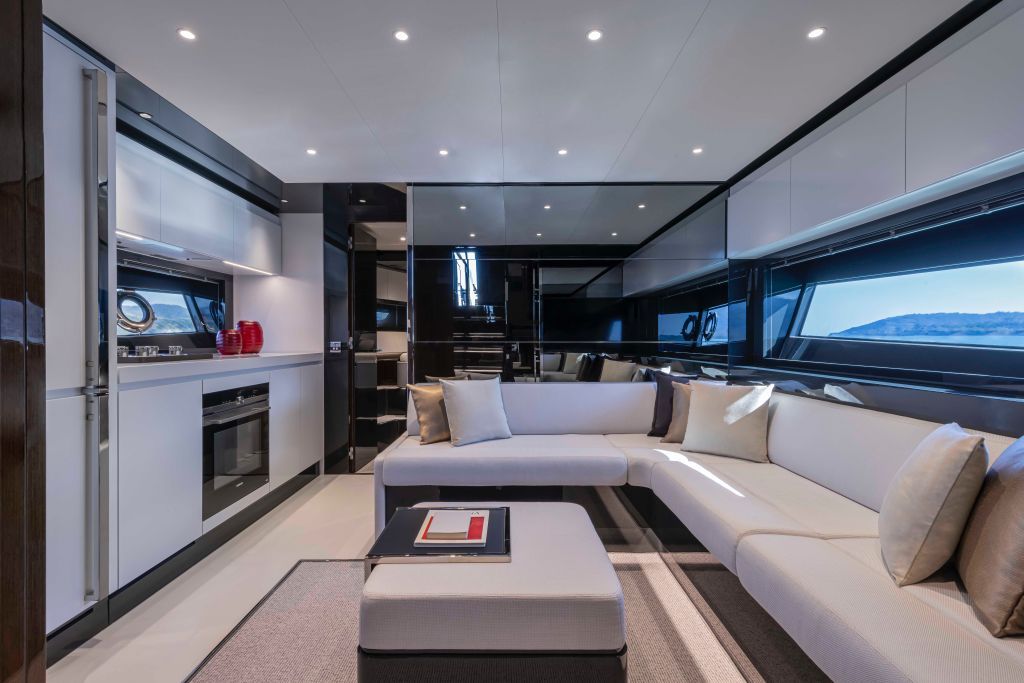 The layout of the lower deck is designed for absolute comfort, with three cabins accommodating six guests arranged around an open space containing a galley and a dinette for versatility and convenience. The master cabin is amidships, the twin cabin with single beds to port, and the VIP forward, all with their own bathroom. The starboard bathroom is also used as a day head and the understairs area can be fitted out as a small laundry. 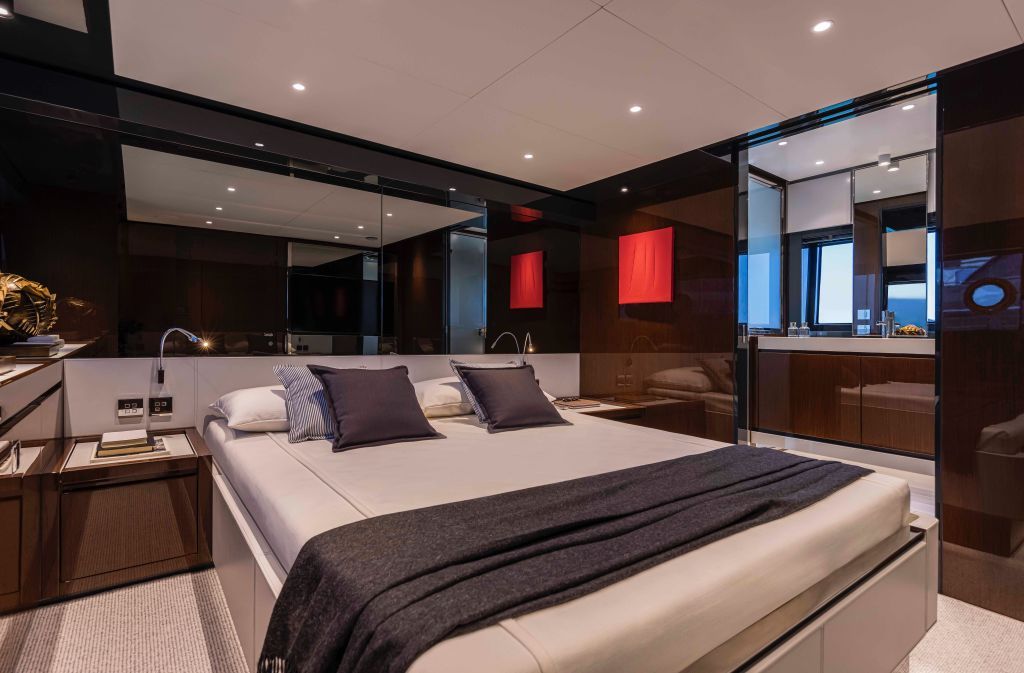 The materials used for the interiors of the 68’ Diable are in perfect Riva style, with gloss-effect chocolate-coloured wengé wood on the first unit, paired with mirrored and satin-finish surfaces, both matt and gloss-effect steel and lacquer, and leather in shades of blue, white, and light and dark grey.

The helm station is equipped with Simrad Command control, monitoring and navigation systems and has two 16-inch touchscreen monitors (the standard version only has one), including the engine panel in the innovative wide version from MAN-Boening.

The electro-hydraulic steer-by-wire system developed in partnership with XENTA offers a slew of benefits, including greater comfort and steering precision thanks to outstanding rudder manoeuvrability and finely tuned turn optimisation in all sea conditions, even at high speeds.

Also installed is the manoeuvring joystick, including docking mode functionality for easy handling in confined waters, such as when mooring alongside, with lateral movement obtained by the combined action of the main propellers and the proportional bow thruster. In addition to all this, the DPS (Dynamic Positioning System) maintains the boat steady in the same position even in strong winds or currents. This is the perfect solution when preparing to moor or refuel, or waiting for a bridge to open.

The new model is fitted with Humphree dynamic trim interceptors.