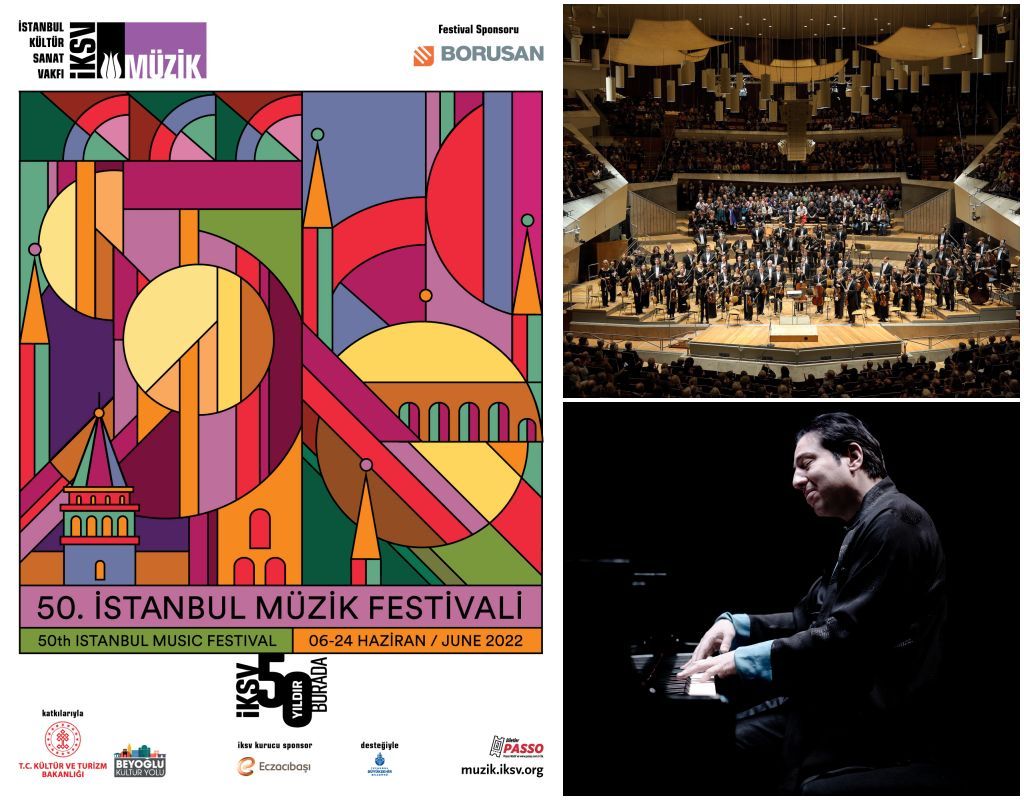 Istanbul Music Festival, the first festival organized by Istanbul Foundation for Culture and Arts (İKSV), is celebrating its 50th year.

This year’s festival will be held from 6–24 June under the sponsorship of Borusan Holding and with contributions from the Turkish Ministry of Culture and Tourism. It offers a rich program for music enthusiasts under the theme of ‘Istanbul’.

The 50th Istanbul Music Festival will host over 65 soloists, ensembles and orchestras from Turkey and abroad in 12 different venues for three weeks. Dedicated to the theme of Istanbul, the festival will welcome audiences at some of the most remarkable venues in the city, including the Atatürk Cultural Center (AKM), an iconic example of Republican Period Turkish architecture that has been rebuilt and newly opened. The venue will host various concerts throughout the festival.

A Programme Dedicated to Istanbul

Music grows, diversifies and flourishes in environments where different cultures meet. This year's programme is a tribute to Istanbul, a cosmopolitan harbour that has embraced different cultures throughout its history. The festival presents a polyphonic, multilingual and multicultural programme, and through that, a reflection of the city of Istanbul.

One of the city’s most remarkable composers Fazıl Say will welcome festival audiences with his renowned symphony Istanbul. The second concert that speaks to the heart of the city and of the city to the heart is Songs from Istanbul, presenting different faces of Istanbul with the Bosporus panorama as the backdrop. Very much inspired by this city and its multicultural past, Musica Sequenza will present Rameau à la turque, where French Baroque and Ottoman Court music meet. With Mare Nostrum, we’ll be turning towards the Mediterranean sea. French accordionist Richard Galliano, Sardinian trumpeter Paolo Fresu and Swedish pianist Jan Lundgren will be playing the sounds of the cultures, gestures and emotions that have developed around ‘our sea’. Another project that will combine different cultures is Music Route. Gülin Ataklı, Barış Büyükyıldırım, Paolo Tagliamento and Duo Aliada – musicians from Turkey, Italy, Austria and Israel – will present work for this special project at various churches and synagogues in Kadıköy. Kinan Azmeh, an artist inspired by cities and cultures, will be a guest of the festival with his Cityband. The ensemble will perform Azmeh's original works that bring together the world of jazz and Arabic music.

The programme includes Turkish premieres of commissioned work from conductor and composer Tan Dun and conductor and pianist Thomas Adès. The Oscar- and Grammy-winning artist Tan Dun will be joined by violinist Daniel Hope, pianist Alexey Botvinov and Borusan Istanbul Philharmonic Orchestra for this special occasion. Described as ‘one of the most successful musicians of his generation’ by The New York Times, Thomas Adès will present the Turkish premiere of his latest work Shanty – Over the Sea. In this concert, Amsterdam Sinfonietta, which specialises in performing music without a conductor, will accompany Valentina Lisitsa, one of the best pianists of our time, together with its concertmaster Candida Thompson.

Known for the rich dramaturgy of its concert programmes Deutches Symphonie Orchester Berlin will be sharing the stage with the star soprano Anna Prohaska. In the concert titled Facce d’Amore, Jakub Józef Orliński, known as one of the leading countertenors, will perform most dramatic love arias from Italian operas accompanied by Il Pomo d'Oro under the baton of Francesco Corti. ‘The hero of classical music on the guitar’ Miloš Karadaglić and clarinettist Andreas Ottensamer will be uniting for a very special concert. Tekfen Philharmonic Orchestra, and star soloists Gautier Capuçon and Alice Sara Ott will also be among the guests of the festival.

Pianist Alexandra Dariescu wants to challenge the traditional concert format and reach out to younger audiences who might not have had the chance to enjoy a classical music concert before. She has devised a live multi-media performance piece for piano featuring a ballerina and digital animation, from Tchaikovsky’s cherished The Nutcracker.

These outstanding artists will be melding their music with the most beautiful and characterful venues in Istanbul. Beyoğlu will be one of the main districts to host audiences. After many years, Istanbul’s iconic arts venue Atatürk Cultural Center (AKM) will be welcoming music lovers again. In the same district as AKM, the well-preserved, historical embassy building Palais de France will be opening its doors to audiences. Constructed in the fifteenth century, and having served many purposes throughout its history (from a cannon-ball factory after the conquest of Istanbul, to its current use as an arts center) Tophane-i Amire Culture and Arts Center will also be filled with music. Located in Emirgan, Sakıp Sabancı Museum Fıstıklı Teras, with its wonderful Bosporus panorama, will treat audiences to an experience like no other. Harbiye joins in the festival with two famous venues: Cemal Reşit Rey Concert Hall (the first concert hall designed for classical music in Turkey) and Harbiye Saint Esprit Cathedral (a destination of several papal visits to Turkey including those of Pope Paul VI, Pope John Paul II, Pope Benedict XVI and Pope Francis). Across the Bosporus, venues in Kadıköy will be welcoming the audiences to the Asian part of the city. Other venues include: Süreyya Opera House, Bahariye Hagia Triada Greek Orthodox Church, the largest Greek Orthodox shrine in Istanbul today, and Moda L’Eglise Notre dame de L'assomption, built in 1865, the biggest church in the district. Kadıköy’s up and coming area Yeldeğirmeni will also host the festival at two spots: Yeldeğirmeni Arts Center and Yeldeğirmeni Hemdat Israel Synagogue.

Festival tickets are available in price categories ranging from 10 TL to 650 TL. You can enter the events by presenting your PDF ticket, which will be sent to your email address and stored under the 'my tickets' section of your profile page on the Passo website. The service fee is included in ticket prices.