Despite travel restrictions last year, there were over 10.7 million Google searches made globally in the last 12 months for ‘nude beaches’, ‘nude resorts’ and ‘sunbathe nude’.

The majority of those searches were made by the USA, Japan and Brazil. However, when population size is accounted for, the people that want to sunbathe naked the most are from Australia, New Zealand and Ireland.

Swimwear brand Pour Moi has investigated the nudity laws of all the countries around the world to find that 39 countries permit nude sunbathing, but 38 categorically do not! And the others have ambiguous rules.

Sunbathing topless, or partially naked, is received very differently around the world, with religious and cultural histories making a big impact on how acceptable or offensive it is deemed. Even within a single country, like the USA for example, different regions have very different stances and laws on naturist activity.

Public nudity laws can become confused with the rules surrounding naked sunbathing, with many countries saying public nudity is illegal, but they are actually OK with topless sunbathing. For most nations, the ‘intention to offend’ is the main thing that differentiates trying to catch some vitamin D without tan lines, versus someone streaking or flashing.

Founder of Pour Moi Michael Thomson says “We know a lot of our customers like to ditch their swimsuit when they sunbathe, and with tentative steps being made towards international travel opening up, we wanted to help people find out where you can and can’t go topless when you sunbathe. We’re a UK company and Brits are stereotyped as being quite prude, but it’s not true, a lot of us love to embrace more naturist ways in the sunshine! It’s been fun comparing which countries are most interested in sunbathing naked, versus what the actual nudity laws are in that country.”

The worldwide map categorises countries into four colours. The 38 countries in red are ones where public nudity of any kind, even non-offensive public topless sunbathing, is completely unacceptable or illegal. Countries coloured green (39) are those which are pretty relaxed about public topless or nude sunbathing, allowing it in multiple official and unofficial locations. 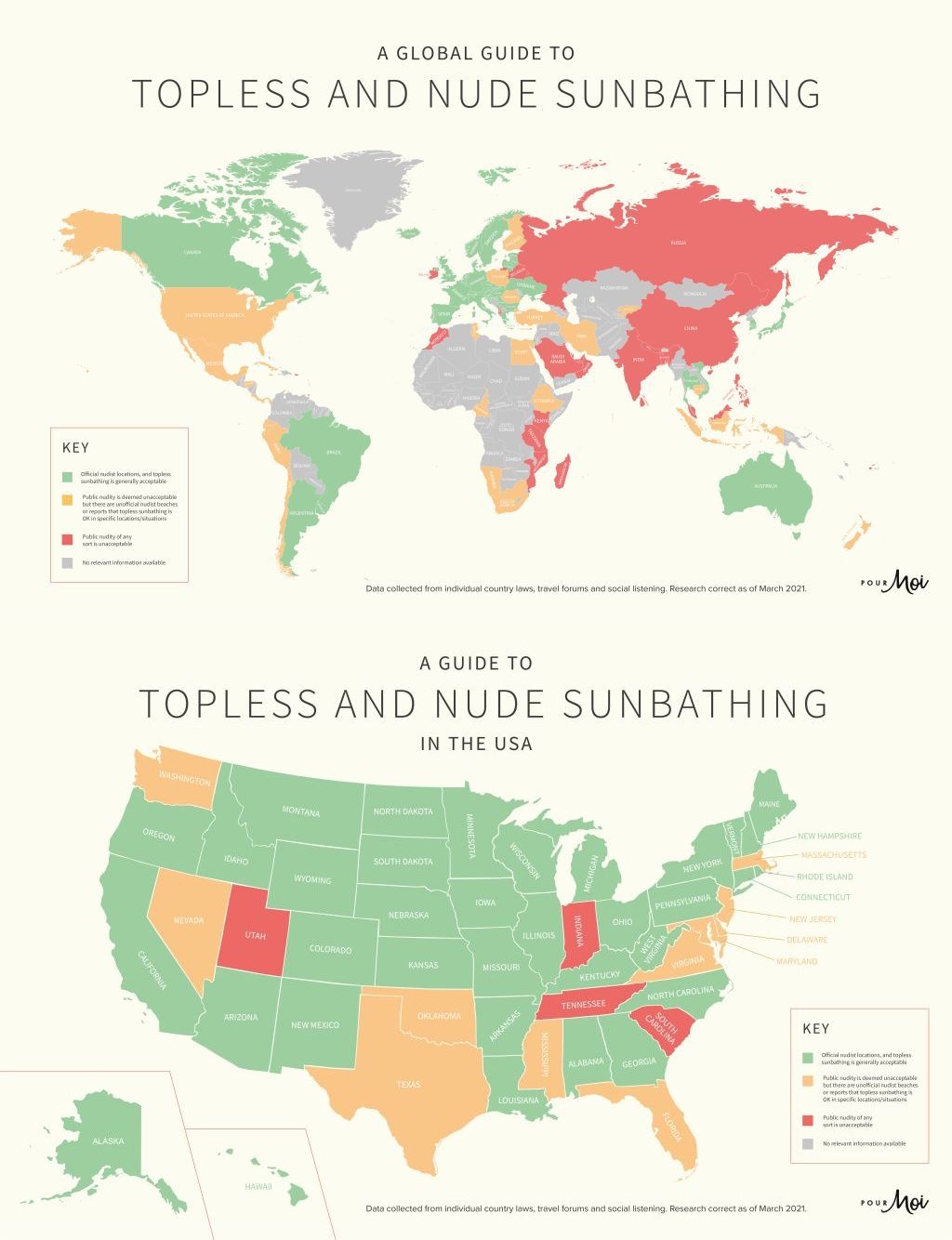 The 29 countries marked in amber indicate laws that are ambiguous or contradictory, or where there are very limited places to naked sunbathe – these places will require a bit more research before taking off your swimsuit. For example, in Tunisia (amber) topless sunbathing is deemed OK in some private hotels and resorts but is generally unacceptable on public beaches. Or, in Costa Rica (amber), whilst public nudity is technically illegal, there are unofficial naturist resorts and beaches.

Countries That Want to Sunbathe Nude the Most (Per Person)

Looking at Google search data, and cross-referencing it with each country’s population size, the ten nations who are the biggest fans of sunbathing naked are:

Brazil – Green: Generally illegal but there are dedicated nudist beaches around the country.

Japan – Green: Although there aren’t many nudist beaches, onsens (hot water springs) are usually attended in the nude.

Croatia – Green: Topless and nude sunbathing is legal and practiced pretty much everywhere.

Denmark – Green: Public nude sunbathing and topless sunbathing are both legal and common to see.

France – Green: Common and acceptable to sunbathe topless, and a large selection of nudist beaches.

Hungary – Green: Nude beaches are quite common and not illegal to sunbathe naked.

Latvia – Green: Topless tanning is totally acceptable, and there are multiple nudist beaches.

Lithuania – Green: Technically illegal but there is a selection of official and unofficial nudist beaches.

Luxembourg – Green: Still a relatively new concept, but there are official nudist beaches.

Norway – Green: There have been reports of some problems for topless sunbathers, but there are some nudist beaches.

Portugal – Green: Not common but it’s legal to sunbathe naked.

Slovenia – Green: Common to see topless sunbathing and there is a selection of nudist beaches.

Sweden – Green: Recent law passed making it legal to be naked in public so that people can sunbathe topless. Official nudist beaches exist.

Switzerland – Green: Legal to sunbathe topless, and there is also lots of naked hiking!

Ukraine – Green: Has a selection of nudist beaches.

Australia – Green: Topless sunbathing is legal and there are plenty of specific beaches for full nudity.

See the full research on the Pour Moi website for a full summary of the rules for each individual country.